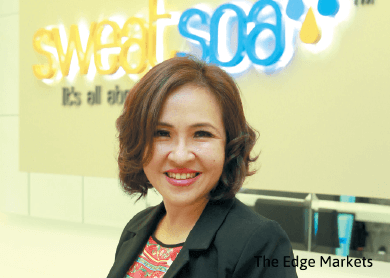 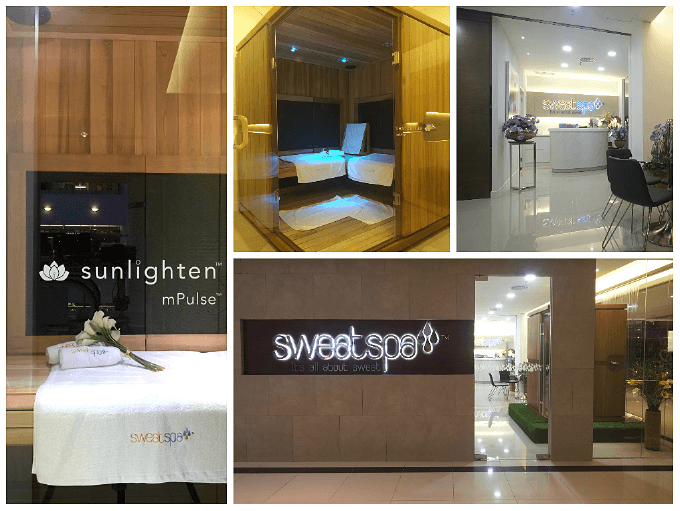 SWEATING is usually not the most comfortable of sensations, so the idea of sweat therapy might not be appealing to most of us. But as our skin is the largest organ of our body, it can also be the most effective in expulsing toxins.

Just ask Sabrina Tang, the owner and founder of Sweatspa, an infrared sauna therapy spa. When she opened her first outlet more than a year ago in Bangsar Shopping Centre, curious shoppers would wander in and ask the inevitable, “Who would want to pay to sweat?”, their expressions predictably sceptical. Once they tried it, however, the sauna spa founder says they returned converted.

She herself began as a user when looking for a solution for her husband, who was suffering from knee and ankle problems that did not allow him to exercise, compounded by several other ailments.

Now running the third Sweatspa, the newest at the revamped Atria Shopping Gallery in Damansara Jaya, the former microbiologist says that the concept is as simple as its name. Tang explains, “We are here to provide a nice ambience and platform to sweat in a comfortable and healthy way, with a therapeutic effect.”

A different kind of sweat

While not entirely new, the infrared sauna — commonly referred to as a Full Spectrum Infrared (FIR) sauna and given a “medical grade” tag — is still relatively unknown in this country. Tang says that the FIR sauna induces sweat from the subcutaneous level of our skin, which is about three to four inches deep. “When we exercise in the gym session, the sweat produced is often sticky and has an odour,” she states, “This sweat on the other hand, has a refreshingly different feeling and is odourless.”

To prove their point, Sweatspa does not contain facilities for showering. “Why do we operate in a mall? Because after the session, you feel clean and can walk around all day,” Tang says confidently.

Mimicking the infrared rays from natural sunlight, which they refer to as ‘radiant heat’ from the morning sun, the technology directly heats up the body as opposed to traditional saunas, where the air in the cabin is heated. “Using steam or hot stones, it basically only warms the surface of the skin. But this technology penetrates directly into the subcutaneous level,” adds Tang.

Using a patented solocarbon technology, the Sunlighten sauna is a pioneering brand that is solely available here through Sweatspa (Tang is also the sole distributor here in Malaysia). The sauna emits near (0.76-1.5 microns), mid (1.5 – 5.6 microns) and far (5.6 – 1, 000 microns) infrared rays, which denotes the different wavelengths.

Isolating only that which is medically beneficial, Tang says the near infrared helps stimulate production of collagen and healing of tissue inflammation, while the mid-range rays penetrates a little deeper for better blood circulation and pain relief effect. The far infrared range is said to be most stimulating for detox and burning fat.

As such, each of their saunas have pre-set programmes adjusted to target specific aims — for better skin, pain relief, anti-inflammation or relaxation, for example.

One of the main benefits of infrared sauna is the removal of heavy metals absorbed through our skin. Tang concurs, “For example you have cadmium, one of the most carcinogenic agents for humans found in our petrol and air pollution. Sweating it out can excrete over 80%, through cleansing and urination only about less than 8%.”

Drawing comparison to the trend of food detox and bowel cleansing treatments, she continues, “Some cleansing methods not only flush out the bad, but the good as well, bringing down our immunity system and digestive system. To me, the safest way is still through sweating, which can bring out 10 times more heavy metals compared to any other way.”

Is it enough to just sit and sweat?

The purpose, Tang emphasises, is not so much for vanity than it is to balance our urban lifestyles. She makes it clear that the infrared sauna is not a fad to replace exercise. “We will never tell customers to forego exercise just to come here and sweat. Your diet is important, your sleep patterns and how your workout is important. Our role here is to complement [those efforts].”

Interestingly, many of her customers are fitness enthusiasts and athletes. Their feedback is that the sauna therapy improves stamina and stimulates muscle mass growth, allowing them to work out better.

“I have a lot of senior citizens who come to us, those in their 60s and 70s who might not be able to exercise. Then there are those recommended by doctors, patients with high blood pressure and chronic illness cases such as diabetic, uric acid, aches and pains, as well as insomnia,” states Tang.

One of the biggest differences from the traditional sauna is that the infrared sauna is suitable for most people, except those with serious angina or recent chest pains. Pregnant women are also advised to seek their doctor’s opinion first.

Tang highly recommends people who have high blood pressure to pay Sweatspa a visit. “FIR infrared causes the body to produce nitric oxide, and it is a [natural] vessel dilator,” she asserts, saying that long-term usage will also gradually soften and even dissolve arterial plaque bit by bit.

This article first appeared in The Edge Financial Daily, on June 25, 2015.