Thong Guan Industries Bhd
Thong Guan (Fundamental: 1.8/3, Valuation: 2.0/3) saw its share price rise as high as RM2.41 from RM2.07 when we first recommended the stock, in November 2014. However, prices fell to an intraday low of RM1.93 following disappointing results for 4Q2014. It closed at RM2.06 yesterday.

The company recorded a net loss of RM4.2 million in 4Q2014, from net profit of RM6.3 million in 4Q2013 – due to one-off impairment loss on receivables of RM5.5 million, realized and unrealized foreign exchange losses of RM4.1 million, and losses related to relocation of its China-based operations.

We believe the worst is over for Thong Guan and expect a stronger 2015, underpinned by capacity expansion and the shift to higher margin products - thin stretch films and PVC food wrap.

Thong Guan completed the 1st phase of expansion at end-2014 with the installation of its state-of-the-art thin stretch film machines, four additional lines for PVC food wrap and new machines for the compounding division.

Notably, Thong Guan is the sole manufacturer of PVC food wrap in Malaysia and one of only three in ASEAN. It aims to be the largest producer in the region by 2016. Profit margin from this segment is the highest amongst its business units.

The weaker ringgit will improve its competitiveness against global rivals.

Earnings will also be boosted by lower resin prices, which are correlated to crude oil. Raw materials account for about 80% of operating costs.

It is currently trading at a huge 37% discount to book value. Historical P/E is 12.4 times – low relative to its prospective growth. Dividends totaled 7 sen per share last year (including proposed final dividend of 4 sen), giving a net yield of 3.4%. 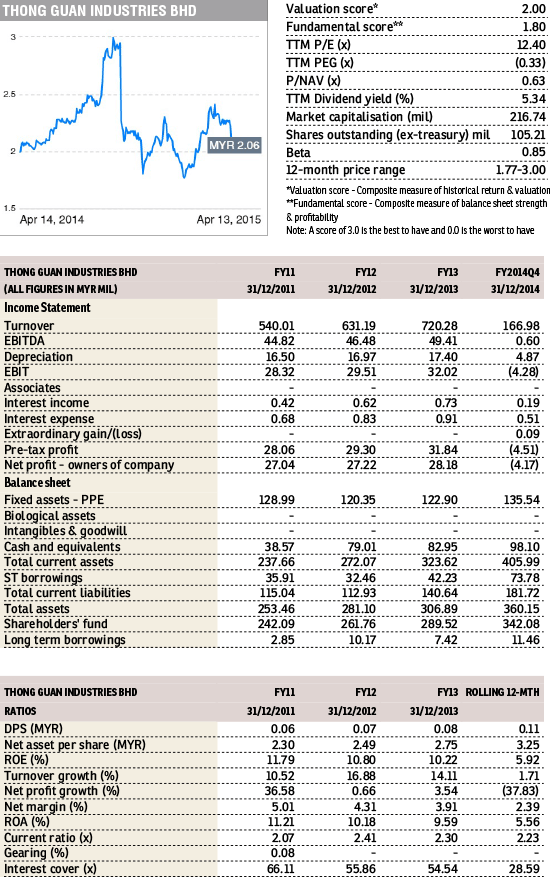