Pintaras Jaya Bhd
PINTARAS (Fundamental: 3/3, Valuation: 1.3/3), one of the only two listed piling and foundation specialists in Malaysia, stands out for its consistent earnings growth, high margins and cash rich balance sheet.

We first featured the stock on October 27, 2014 when its price was at RM4.25. Prices then rose to a high of RM4.52 in November before falling as low as RM3.20 under a broader market selldown in mid-December. Since then, the stock has rebounded to the current RM4.05.

Most recently, Pintaras was awarded a RM21.4 million contract to undertake the extension of diaphragm wall and bored piling works for a proposed commercial and residential development at Icon City –Phase 1. The contract is for a period of 12 months from 21 January 2015.

Moving forward, the 1,663km Pan-Borneo highway and the 56km Klang Valley MRT-Line 2, costing RM23 billion and RM27 billion, respectively, are slated to commence construction this year. We believe Pintaras would be one of the key beneficiaries, given its solid track record in piling and foundation works.

We like Pintaras for its exposure to the construction sector and attractive valuations. It is trading at 2.02 times book value compared with peer, Econpile’s almost 2.94 times book valuation. And despite having a smaller revenue base, Pintaras’ margins are higher.

Additionally, Pintaras has a history of rewarding shareholders with dividends. Payout averaged about 40% for the past 3 years. For FY14, dividends totaled 15 sen per share, giving a yield of 3.7%. 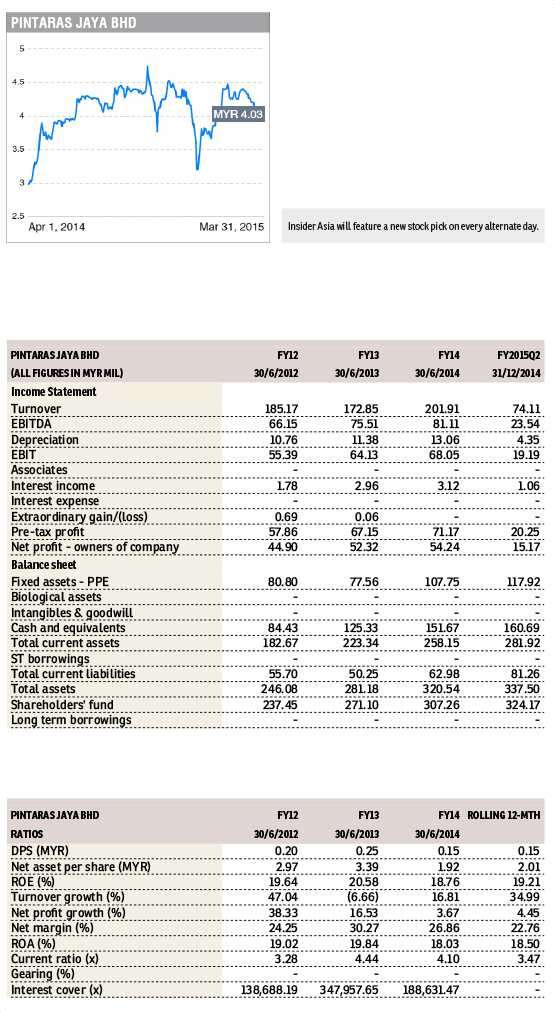