IPOH-based OKA Corporation is a major manufacturer of pre-cast concrete products in Malaysia. Founded in 1981, it has five factories located in the peninsula, producing pipes, L-shaped retaining wall units, U-shape drains and other concrete products catering for the infrastructure, sewerage, construction and highway industries.

OKA offers investors an attractively-priced exposure to Malaysia’s ramp-up in infrastructure spending with its strong fundamentals, low valuations and decent yields. At 78 sen, the stock is trading at just about its book value of 77 sen and a trailing 12-month P/E of just 7.5 times.

Having supplied to major projects including KLIA 2, MRT and LRT, as well as the Pasir Panjang Terminal in Singapore, OKA should continue to benefit from future infrastructure projects such as the MRT 2 and LRT 3.

The company implemented a 1-to-2 stock split in May and a 1-for-4 bonus issue in November, improving liquidity for the stock. Its share price had been trending higher through to the third quarter of 2014 before correcting under current weak market conditions.

OKA’s revenue has grown steadily, from RM103 million in FY March 2010 to RM145.4 million in FY2014 while net profit expanded from RM3.9 million to RM13.4 million over the same period. Net margin widened to 9.2% in FY2014, on the back of revenue growth and prudent cost control.

The company has paid consistent dividends, between 3-3.5 sen per share over the last 5 years. Dividends for FY2014 totalled 3 sen per share, translating into net yield of 3.8%. 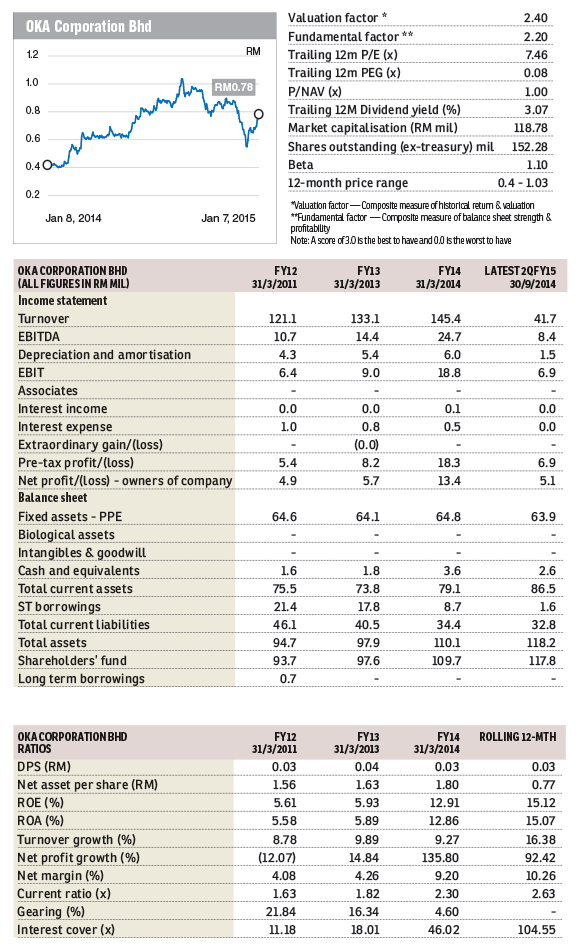