Oceancash Pacific Bhd
OCEANCASH (Fundamental: 1.4/3, Valuation: 0.6/3) was first recommended by InsiderAsia back in October 2014. The stock did well, rising from 29.5 sen to a high of 40.6 sen in November but has since retraced to the current 35 sen.

Part of this could be due to its latest 4Q14 earnings results. Whilst revenue increased 6% to RM72.80 million, net profit was down some 24.5% to RM4.91 million. The results included a one-off loss on disposal of machinery amounting to RM1.72 million in 3Q14. Excluding this, Oceancash’s net profit would be 1.9% higher at RM6.63 million compared to RM6.50 million in 2013.

To be sure, this growth is not exciting. But we believe the company has good prospects. Underlying earnings have been rising steadily over the past four years, EBITDA margins are consistently in the double digits, ranging between 14-18%. Net gearing is low at 5.57%.

Oceancash has a stronghold in a niche segment and a large target market.

The company manufactures (and exports) resinated and thermoplastic felts, noise and carpet underlays, that function as heat and sound insulators. It also produces non-woven products used in baby diapers and sanitary cloth products. The company has plants in Malaysia and Indonesia and in 2012, established a trading company in China.

Whilst the barriers to entry to manufacture these products are low, Oceancash has significant competitive advantage in having established long relationships with its major customers.

The company will start a new felt production line in Indonesia this year and transfer an existing line to Bangkok. This is aimed to address the expanding automobile and property markets as well as to improve cost efficiency. 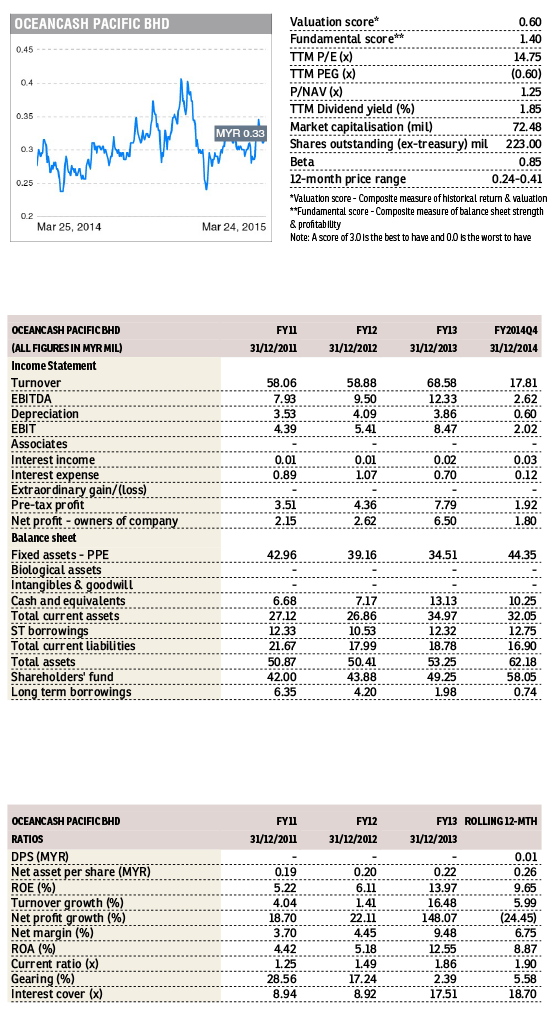