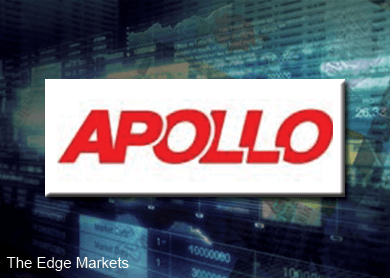 Apollo (Fundamental: 1.45/3, Valuation: 1.4/3) is expected to see a turnaround in its financial performance after raw material prices declined from record high levels.

Apollo is a manufacturer and exporter of compound chocolate confectionary products and layer cakes. Exports account for 40-50% of sales and are mainly denominated in the US dollar. Hence, the strengthening greenback bodes well for the company.

The company reported the sixth consecutive y-o-y decline in net profit in 3QFYApril2015. Net profit for the quarter fell 9.3% y-o-y to RM8.2 million, mainly due to higher raw material costs and tax expenses. However, sales grew 2.6% to RM55.6 million.

We expect Apollo to record better earnings this year. Prices for cocoa futures fell 18.0% to US$2,699 per tonne at end-March, after peaking at US$3,290 in Sept 2014. Prices are likely to drop further due to slowing global demand and expectation of bumper crop in Ivory Coast, the world’s largest cocoa producer. Also, sugar prices have dropped by one-third since June 2014. Prices are expected to remain low due to oversupply.

We like Apollo for its undemanding valuations, especially for a consumer company. The stock is trading at a trailing 12-month P/E of 14.2 times and 1.5 times book. By comparison, the domestic F&B sector is trading at about 27.4 times PE and 3.1 times book. We expect the company’s profitability to improve with easing cost pressures and the strong US dollar.

The company has paid consistently high dividends. From FY2009-FY2013, dividends per share averaged 20 sen, and increased to 25 sen in FY2014, giving an above-average yield of 5.4%. It has a debt-free balance sheet with net cash of RM81.9 million or a significant RM1.02 per share. 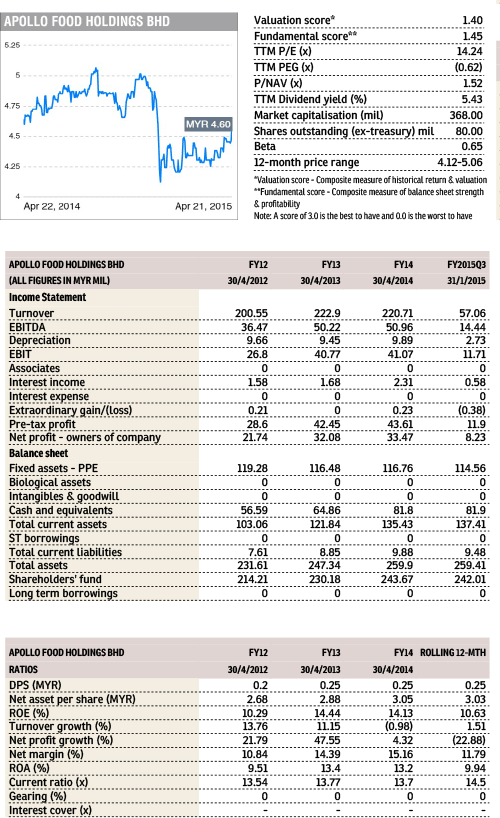