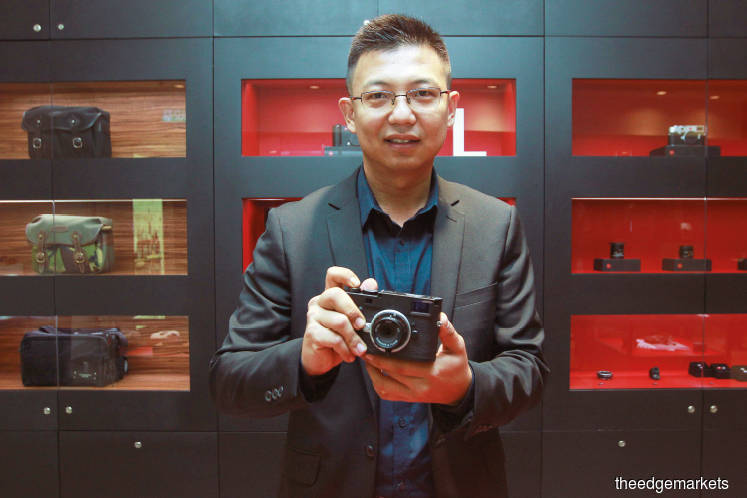 Film photography, which underwent a steady decline as more people moved to digital photography, has made a comeback. But what was once commonplace is now emerging as an art form.

Leica Camera Malaysia’s business development manager Ng Chi Loon has seen film photography grow to become more than a trend in today’s world. In fact, he notices that most film enthusiasts miss the photographic journey, where half the thrill comes from the complexity — that is, the need to manually adjust the camera settings — and the time taken to develop the film. It is almost like the difference between crafting a handwritten letter and dashing off an email.

“If you want to shoot [a picture] nowadays, you would just take out your mobile phone to do it, but with the [film] camera, you need to adjust the settings first and put a lot more thought into it; this is what most photographers miss. The feel [of film photography] is different because when you shoot, you don’t get to see the photo as soon as you take it,” Ng says.

For this reason, Leica developed the Leica M10-D, which is a digital camera without the LCD screen. It combines the best of both digital and film because the photos can only be viewed if you plug the memory card or camera into a computer.

“It gives half the excitement of film photography but with a digital backdrop because Leica realised that while you see growth in film, there are insufficient facilities to accommodate this market,” says Ng.

For example, there are no longer that many machines capable of developing film into photographs — not only in Malaysia but also the rest of the world. “There are only a handful of [industry] players still keeping the machines to develop film,” notes Ng.

He noticed film photography making a comeback three to four years ago. “It was a gradual thing. In early 2015, we saw some market dealers starting to sell film again, and since then, demand has grown,” he says.

Interestingly, according to Ng, youths in their 20s are taking an interest in film photography because they are curious about how it works. “They have never experienced film photography and they want to try it out.”

This may have something to do with hipsters and their hankering after all things retro such as old-fashioned typewriters and horn-rimmed spectacles. But not all who are embracing film photography are first-timers. “Some senior photographers who migrated to digital want to experience film again. They have an interest in both mediums,” says Ng.

Meanwhile, Fujifilm’s corporate planning general manager Takahiro Igarashi says film photography made a comeback as an increasing number of photographers started to dabble in film. But many did more than just dabble; they saw a definite future in film photography.

“Many professional photographers are picking up the art of film photography to differentiate themselves in the market. It’s not just a matter of nostalgia. Film photography has its own unique imaging, which cannot be replicated by digital cameras. Those in the younger age group like using Instax [instant prints] as it makes for unique keepsakes that can be shared with their friends,” he says, adding that many choose to share Instax prints over social media.

So far, Japan has the highest number of users for film photography, claims Igarashi, with other countries, mainly in Asia, following suit. He says recent studies show that many people are into instant photography. In fact, Instax prints are a huge market for Fujifilm.

“Although the processing of images may not be the same as classic film photography, more people are starting to use Instax, allowing them to experience the uniqueness of analogue photography, says Igarashi. “Instax turns 20 this year, and we have managed to hold our ground against the arrival of digitalisation.”

Igarashi says for Fujifilm, the demand for film in 2010 dropped to less than a 10th of what it was in the year 2000, but that did not mean that the film industry was decimated. Professional photographers were slowly returning to film photography because it produces images with a depth that digital cameras could not replicate. “This has caused photographers to start working with film cameras, thus bringing back the art,” says Igarashi.

Because of the dominance of digital photography in the market, film photographers tend to stand out. Igarashi says photographers use film as a training ground to hone their craft because there is no digital editing involved. Once they have perfected it, they transition from amateurs to professionals, and continue using film, thereby increasing the demand for it.

So, where demand for film dropped among the masses, it rose among the newly professional photographers looking to create a niche, akin to the growing demand for vinyl records, which may not be as cheap or as convenient as MP3 downloads but which produce sounds with a more textured quality.

If you do a quick Google search on film photography, you will find listicles giving you reasons to take it up, how to do it and what to buy. Photographers consider analogue cameras an amazing tool to improve technical and creative skills. Without the ability to check photos as soon as they are taken, they are forced to learn how to prep for any scene instead of relying on trial and error.

In photojournalism, the depth and emotion of film photography is important. The uniquely grainy and textured quality of the photographs compared with the hyper-realistic exposures of their digital counterparts are highly valued. And this is what keeps photographers excited and coming back for more.

Leica’s Ng says of the two mediums, digital photography is in for more disruption, with the advent of Industry 4.0. Film photography, on the other hand, is niche market and considered more of an art form.

For instance, Leica recently launched the Q2 to cater to the demand for higher-resolution cameras in commercial work. “But Industry 4.0 won’t affect film photography because, at the end of the day, it’s more of a hobby and an art form.”

He likens it to physical art. Although this can be produced digitally, most people still opt for the rawness of paint and brushes. “The traditional way is still relevant,” he says. When it comes to film cameras, enthusiasts are more into vintage and collectibles, quite simply because most brands no longer produce film cameras.

Leica has only one film camera still in production — the Leica MP, as the company’s focus is  very much on digital products. “We see a bit of a contradiction; while film photography is actually increasing [in popularity], sales of new film cameras are falling, because most new film photography enthusiasts prefer pre-owned cameras,” says Ng.

Fujifilm has a different strategy to tackle the convergence of digital and film photography. Igarashi says a recent Fujifilm study showed that youngsters were enthusiastic about printing the photos they captured with a smartphone or camera and then organising them in creative ways. “All these can be done quickly and seamlessly via the Fujifilm photo transfer app, which can be linked to printers, providing customers the convenience of printing their captured images,” says Igarashi.

Last December, Fujifilm Malaysia launched its fifth Wonder Photo Shop at Mont Kiara, KL, proving that there is still a demand in Malaysia for printed memorabilia. The concept store features Fujifilm’s products and services, including regular photo prints and accessories such as washi tape, albums, frames and stickers.

“The Wonder Photo Shop allows customers to express their creativity beyond a photograph for both digital and analogue images and provides an opportunity for customers to experience the photography heritage of Fujifilm,” says Igarashi.