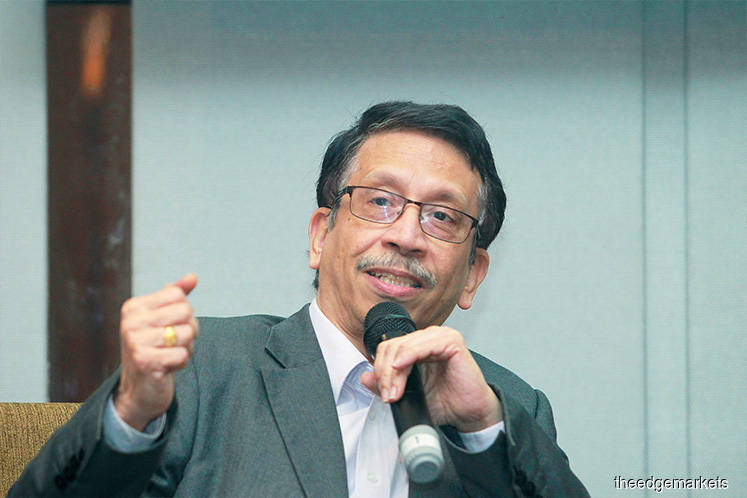 Malaysia has many unique qualities and skill sets that puts it in an ideal position to adopt Industry 4.0, maybe even more so than its Asean neighbours, says Fusionex International vice-president of new technologies Raju Chellam.

For instance, he says, Malaysia has English language skills which Singapore may also have, but the latter lacks land and competitively priced labour. Cambodia and Vietnam, on the other hand, may have competitively-priced labour but they fall short when it comes to having the proper infrastructure in place as well as English-language skills.

“Put all of these together and you have what it takes. What it requires is probably political will and awareness from the community,” he said in his presentation on “Gearing up for 4.0” at The Edge Industry 4.0 Forum: Embracing Digitisation in Petaling Jaya recently.

But currently, the level of technology adoption is low in the region, Chellam observes. This is a matter of some concern because the low awareness will result in these countries not having a workforce that is competent in the Industry 4.0-related technologies. On the flip side, however, these countries can leapfrog straight into the newer technologies.

“You can bypass big data and go straight to artificial intelligence (AI). Is Malaysia doing it? No. Is Singapore doing it? No. India is doing it because it has a huge population. The big data guys are not the ones leapfrogging to AI. It’s a different group of people. People in the medical community are doing it because it integrates neural programming. Think about how Malaysia can benefit from these areas,” he said.

The difference between big data and AI is that big data uses brute force computing to go through huge amounts of data while AI relies on neural programming.

“Big data is where you have to go through each scrap of data, whether it is relevant or not. In AI, it is like your brain, where you have intuition. You have some of the facts, some experience and it is very fuzzy, but you still come out with a reasonably accurate diagnosis,” Chellam adds.

Big data analytics could be useful for predictive maintenance. For instance, if a car has a leak in the radiator or oil tank, the problem can only be identified after the car shows signs of breaking down. “But if you put Internet of Things sensors there, they will be able to alert you if you have a problem, tell you where the nearest mechanic is and give you the GPS (global positioning system) coordinates to get there.”

Meanwhile, AI could be used in the medical world assisting doctors to perform differential diagnosis. For instance, an intelligent system that has done analysis on hundreds and thousands of patients with colon cancer can help doctors figure out where the cancer has metastasised in a particular patient.

“It can come and say this person’s profile matches exactly this other person who had it in this country and this year, and check for metastasis in the bone marrow. The hit rate of this kind of differential diagnosis is as high as 88%,” Chellam says.

The potential for AI is biggest in the travel industry, followed the retail industry, he adds. AI would be able to power the process, which involves logistics and planning, using fuzzy logic and prioritisation.

Choosing the right technology partner is very important, he adds. Companies should find a partner who can address their weaknesses, whether it be in data management or AI. In addition, the partner should provide end-to-end services from the cleaning of raw data to the delivery of algorithms. They should have the certifications from independent third parties.

“You should find a partner and not a vendor. The vendor will sell something to you and go away; he doesn’t care whether you use it or not. But a partner will invest with you, do the proof of concept free of charge and be invested in your success,” Chellam says.

With AI and big data, the biggest threat lies in identity theft. The hackers could use the person’s identity to access confidential information of companies or the government. They could also use the hacked accounts to trade in drugs or pornography. Chellam says Fusionex is currently working on a solution called ephemeral security, which uses AI and big data, to address the problem.