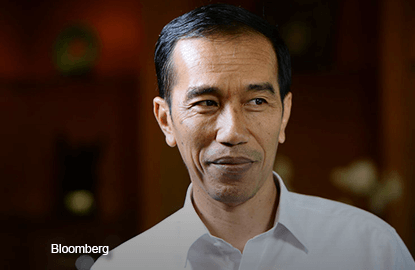 A little over a year ago, Joko Widodo swept to power in Indonesia promising bold changes and higher living stands. Voters enthusiastically bought into his everyman image: He’s Indonesia’s first president with no ties to the military, the country’s dynastic families or its sprawling party machinery.

These days, a more common sentiment in Southeast Asia’s biggest economy is buyer’s remorse. The hands-on, get-things-done reputation that the new president, commonly known as Jokowi, carried into office has frayed. Desperate to reverse the slide, he’s trying to revitalise his team and his agenda.

Last month, he named former central banker Darmin Nasution as his new economy minister and brought former finance czar Rizal Ramli into the cabinet. They’ve wasted no time in promising big stimulus and structural reforms. Trouble is, there’s already reason to think this may end up being just more talk.

The slump in commodity prices has hit Indonesia particularly hard; any new stimulus will have to contend with falling tax revenues. Tepid levels of foreign-direct investment make Jokowi’s plan to spend at least US$20 billion (RM87 billion) on infrastructure in 2015 — the most in the nation’s history — look fanciful. Vows to cut red tape and simplify investment regulations look no more realistic, given how many vested interests populate Jokowi’s own party. Even hopes of ending Indonesia’s power bottlenecks remain a reach.

The administration’s many flips-flops aren’t helping. Last month, the home ministry announced a raft of new requirements for foreign journalists. While they were quickly reversed after a public outcry, the move echoed the mixed signals and often intensely nationalist tone that’s emerged from Jakarta lately.

Some investors are voting with their feet. The rupiah is down 13% this year, the weakest since dictator Suharto was toppled by mass protests 17 years ago. Jakarta, meanwhile, is among Asia’s worst-performing stock markets (down 26%). Shares in the two other economies ravaged by the 1997 Asian crisis — South Korea and Thailand — have lost 10% and 15% respectively.

Jokowi still has plenty of time — four years — to turn things around. How? The first priority is restoring confidence in his ability to get things done. The recent cabinet reshuffle presents an opportunity to take on the nation’s notoriously corrupt bureaucracy. Jokowi has shown flashes of great courage, as when he slashed budget-busting energy subsidies and increased transparency at government ministries. He needs to go further, and bring greater grit to the fight.

Consistency, too, is critical. Along with narrowing the current-account deficit and shoring up the financial system, Jokowi should reverse policies endorsing protectionist laws against mining and technology companies, and stop doling cash to inefficient state enterprises.

He must increase regulatory certainty and stop talking out of both sides of his mouth on trade. Too often the message from the government has seemed to be, “We welcome foreign money, but only on our terms — which, by the way, can change at any moment.”

McKinsey & Co thinks Indonesia could become a Group of Seven economy by 2030. Getting there requires more strenuous efforts to create new manufacturing industries and the hardware — roads, bridges, ports, power grids — to support them.

Jakarta must work harder to diversify the economy away from natural resources; that in turn will require bigger investments in education and training. Dialing back the economic nationalism and embracing foreign capital would help finance these and other upgrades.

On its own, little of what Jokowi or his new team has proposed thus far will restore confidence in an economy that’s lost its way. If he’s going to turn things around, they should talk less and do more. — Bloomberg View