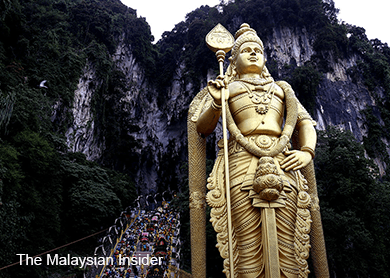 (April 17): Lawyer M. Manoharan is seeking a court declaration that the Sri Maha Mariamman Temple Dhevastanam Kuala Lumpur, reputedly the richest Hindu organisation in the country, must be for the benefit of the entire community.

In a suit filed at the Kuala Lumpur High Court registry today, the former Kota Alam Shah assemblyman also wants the temple chairman Tan Sri R. Nadaraja be removed for failing to administer the organisation as a charitable, cultural, religious and educational trust.

In addition, Manoharan wants the High Court to set aside a 1930 Supreme Court order that the temple was a charitable trust for the benefit of a select group of people.

The Batu Caves temple which is the nation's main venue during the Thaipusam festival, is among 19 movable and immovable properties worth about RM2 billion owned by the Sri Maha Mariamman Temple Dhevastanam.

Manoharan said Nadaraja has abused his power by remaining as temple chairman for about 30 years.

"We also want to stop him from being a signatory to cheques and that his sons do not succeed him. Next year's Thaipusam festival should also not be led by Nadaraja," he said in his originating summons.

Manoharan, who is represented by lawyer P. Uthayakumar, said the tenure of all future temple chairman should be limited to two terms or four years.

"All Malaysian Hindus should have the right to elect the temple management committee which is not the case now," he added.

The former Internal Security Act detainee, who spent almost two years in Kamunting, further said that Nadaraja and his immediate family members must declare their assets and all future statement of accounts be independently prepared by an accountant appointed by him (Manoharan).

In the suit, he also wants the temple management to stop a proposed development of the Sungai Tua land in Batu Caves for a RM250 million condominium project and to instead build a Tamil secondary school with hostel facilities.

Manoharan later told reporters that he filed the action as a public spirited citizen and a Hindu to prevent further abuse by the temple management led by Nadaraja.

"The management structure of the temple as approved by the court order is no longer applicable. The temple accumulated immense wealth due to support provided by Hindus in Malaysia," he said.

He said Nadaraja should not be allowed to hide behind the 1930 court order to remain as the top office bearer.

Manoharan expressed confidence that he had the standing to initiate this action on behalf of other Hinduson grounds of public interest. – The Malaysian Insider