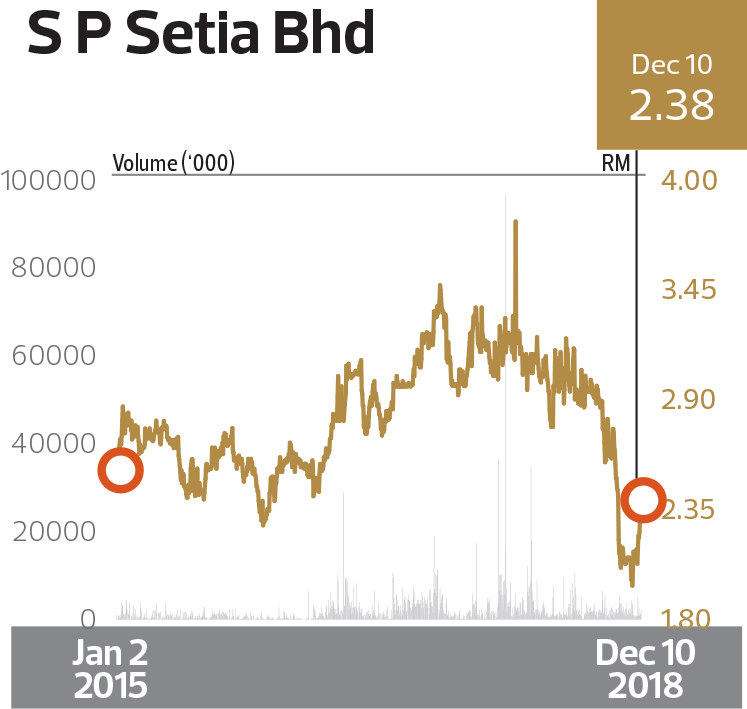 In the face of a soft property market, S P Setia Bhd has emerged as the winner in the category of the highest growth in profit after tax over three years among larger property companies in this year’s The Edge BRC awards.

The property giant managed to grow its revenue at a steady pace from FY2014 to FY2016, from RM3.87 billion to RM5.71 billion. However, in FY2017, the developer saw a dip in revenue to RM4.52 billion, as a result of the completion and handover of Parque Melbourne in Australia, several phases in KL Eco City in Jalan Bangsar and Eco Sanctuary in Singapore in FY2016.

In its 2017 annual report, S P Setia highlighted that the lower revenue was also due to its strategic move to reposition its launches late in 2016 and to defer development stages in light of softer market conditions.

About 91% of the group’s total revenue is derived from the property development segment while 5% comes from construction and other operating activities account for 4% of total revenue.

The developer has also spread its wings to international markets, including Australia; the UK, with its 40% stake in the well known Battersea Power Station project; Singapore; China and Vietnam.

S P Setia has reshaped its portfolio to respond to the rising demand in the affordable and mid-priced category, which is largely driven by the younger population, middle-income segment and first-time homebuyers.

“These product offerings were well received by first-time homebuyers and owner-occupiers. We have demonstrated our ability to weather the challenges with the right strategies and products. This cemented our position as the No 1 pure-play property developer and fortified our leadership in township development,” it said in its 2017 annual report.

In its recent cumulative six-month ending June 30 financial report, S P Setia — which recorded revenue of RM1.58 billion and a net profit of RM504.23 million — said buyers’ sentiment has improved post-GE14 but many are still waiting for a clear direction for the anticipated changes to the housing policy.

Moving into the second half of 2018, the property giant said launches would continue in the local market with emphasis on mid-range landed properties in the Klang Valley. Major launches were scheduled in Setia Alam, Setia Ecohill, Setia Ecohill 2, Setia Eco Templer,

Nevertheless, S P Setia believes the property market will continue to be subdued as people adopt a wait-and-see approach until the authorities provide a clearer picture on housing policy.

“Notwithstanding this, the group’s prospects ... remain positive with total unbilled sales of RM8.12 billion, anchored by 46 ongoing projects and effective remaining land bank of 9,587 acres, with a potential GDV of RM155.94 billion as at 30 June 2018,” it said.

With the planned pipeline of launches, sustained momentum and the sales achieved to date, S P Setia said it remained positive about achieving its sales target of RM5 billion for FY2018.