Lifestyle
From The Edge
Style 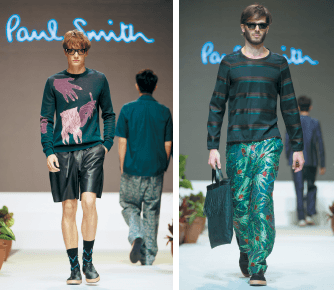 AS a name synonymous with putting modern British menswear on the map, Paul Smith delivers his spring/summer 2015 collection that has all the relaxed touches associated to dressing for warm weather. The brand’s presentation at the Pavilion Pitstop last Friday was its first fashion show ever in Asia.

Three common themes were highlighted in this ready-to-wear collection for this season: stripes, fringe and utility. With these themes, the overall collection exuded an effortless and casual look while still maintaining the fine tailoring that the brand is known for. There was also a colour contrast between day and evening wear where grey and blue pastel shades were used for the day while for the evening, clothing had a dark and silky appeal.

There was a strong 1970s vibe throughout the menswear collection, with leather fringes on jackets and rainbow stripes featured consistently on shirts. Slouchy trousers were the way to go for the menswear collection with models strolling down the catwalk in lounge style trousers or shorts in shades of navy, dark green or teal. The plant botanical print which is seen as the new update on the floral trend was also seen on the runway on either trousers or shorts. Once again, Paul Smith had foregone the traditional rules of menswear and had instead adopted an anything-goes attitude.

Relaxed silhouettes paired together with vertical stripes allowed the collection to adopt a deconstructed look in the womenswear collection. Stripes and utility-inspired styles went hand in hand in the womenswear that would be a great choice for either work or play. Drop-waist dresses, wide-leg trousers and tunic tops gave the collection the minimalist-luxe look that has been taking the season by storm. Fringe was also present in womenswear with as added details on tunic tops.

Once again Paul Smith had delivered a collection that was still intrinsically linked to British style and heritage but with a modern twist. 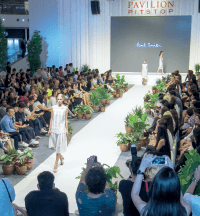