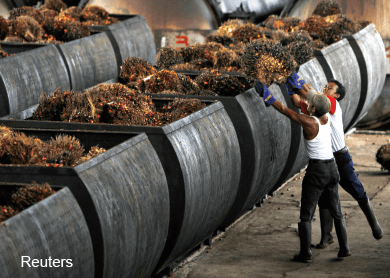 KUALA LUMPUR: The continued weakness in crude palm oil (CPO) prices took its toll on most plantation companies’ earnings for the quarter ended June 30, 2015, with some swinging to a net loss.

This raises concerns that planters may slash capital spending this year as they focus on preserving cash, a move that will impact palm oil mill equipment and parts makers — considered as second-liner stocks.

However, analysts are bullish on these stocks, namely CB Industrial Product Holding Bhd (CBIP) and Dolphin International Bhd with their healthy order book position, which will last until at least the end of next year, adding that they offer future potential that is expected to fetch good returns once the plantation industry rebounds.

They also noted that planters have so far showed no signs of scaling back their capital expenditure (capex).

Kenanga Research analyst Voon Yee Ping is optimistic about CBIP’s mid-term outlook given its strong pace of order book replenishment, as well as an anticipated increase in fresh fruit bunch production in the coming years, which will boost sales for palm oil mill equipment and parts.

“Planters have consistently been planting new trees in the last three or four years when the CPO price was high. As these trees mature, they need more mills to process these fruits,” she told The Edge Financial Daily.

“In view of this, CBIP’s contract replenishment should remain decent, over the next two to three years,” Voon said, adding that this will provide good earnings visibility for the group going forward.

He noted that CBIP has secured RM200 million worth of contracts for the POE segment thus far.

“On this note, order book replenishment might exceed our assumption of RM400 million for the financial year ending Dec 31, 2015 (FY15),” he added.

However, Cheah said the order book replenishment will also depend much on CPO prices going forward.

“Planters would normally rein in capex [on future high-cost projects] if CPO prices remain weak for an extended period,” he said, adding  that this could have impacted CBIP’s order book restoration.

“Instead of having three mills this year, they may only get two. There may be some cutting [in capex] in the near term, but as long as CPO prices do not drop further then it should not be a problem,” she said, expecting CBIP’s order book replenishment to be flattish in the near term.

Newly listed palm oil mill manufacturer Dolphin is another stock analysts believe will offer a value play opportunity. It has an outstanding order book of RM176 million that should last until FY16.

In a note to clients on June 9, Kenanga Research said some 54 out of Dolphin’s current 114 customers (47%) were recurring ones.

“With a mix of new and recurring revenue, we assume an annual order book replenishment of RM170 million,” the research firm said.

“We further understand that Dolphin is also one of CBIP’s part suppliers,” it added.

Kenanga Research also noted that CBIP is currently trading on FY15 price-earnings ratio (PER) of 11.6 times, while Dolphin’s forward FY15 PER is 4.2 times — both trading at a lower PER than its industry peers’ average of 15.2 times.

“We believe that the CPO price recovery is mainly due to demand recovery and lower supply,” Kenanga Research added.

Affin Hwang Capital Research said in a note dated June 8 that Dolphin intended to capitalise on the prospects offered by oil palm industries in Malaysia and Indonesia, which have 439 and 608 palm oil mills respectively.

It also noted that Dolphin’s net gearing would be reduced to 0.03 times from 0.27 times after it fully utilised the gross proceeds raised from its initial public offering.

Dolphin, meanwhile, posted a net loss of RM3.47 million on revenue of RM13.47 million in 2QFY15 due to listing expenses.

For the cumulative six months, the company recorded a net loss of RM363,000, while revenue came in at RM24.09 million.

Shares in CBIP closed at RM1.80 on Wednesday with a market capitalisation of RM949.35 million. Dolphin’s counter ended the day at 79 sen, giving it a market cap of RM175.38 million. 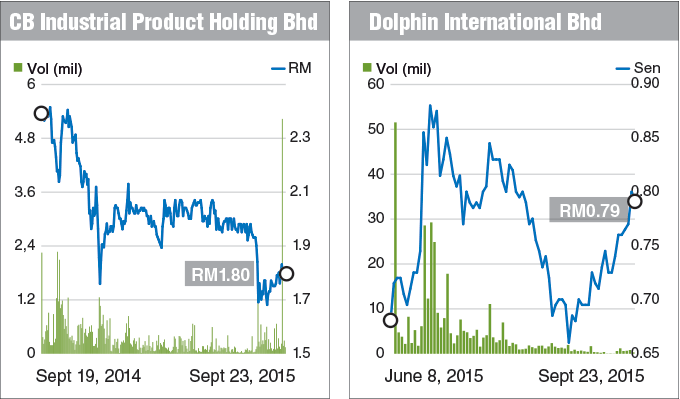