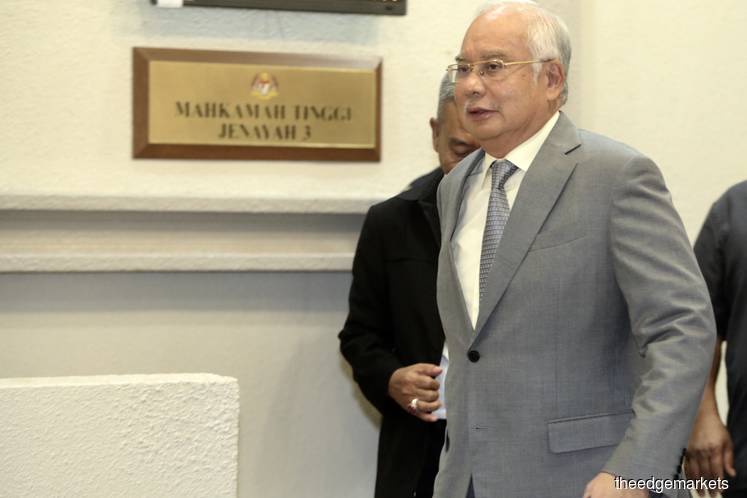 KUALA LUMPUR (April 29): Former premier Datuk Seri Najib Razak has failed in his bid to strike out all his seven charges in relation to the misappropriation of SRC International Sdn Bhd's funds of RM42 million.

High Court judge Mohd Nazlan Mohd Ghazali today dismissed an application to strike out all the charges raised by the defence.

There is no ambiguity on the positions of Najib being prime minister, finance minister and advisor emeritus of SRC, he added.

The judge also said there is no ambiguity in the charge and the prosecution is entitled to frame the change.

"The money laundering, CBT and abuse of power are distinct offences and there is no duplicity.

"The charges also comply with Section 165 of the Criminal Procedure Code. There is no legal impairment in the charges and in the end it is the duty of the prosecution to present the charges and the court would evaluate it," Justice Nazlan stressed.

"Any conviction can be secured if the prosecution proves each of the offences.

"The defence had not shown how the applicant is prejudiced. Nine days of trial had passed and there is cross-examination done by the able defence. It is difficult to comprehend that the accused could have been misled," the judge said.

In view of this, Justice Nazlan said the argument that the charges are flawed is without basis and this application is hereby dismissed.

For this SRC trial, Najib is facing seven charges: one count of abuse of position under Section 23 of the MACC Act 2009, three counts of CBT under Section 409 of the Penal Code, and three charges of money laundering under Section 4(1)(b) of the Anti-Money Laundering, Anti-Terrorism Financing and Proceeds of Unlawful Activities Act 2001.

Until last Friday (April 26), 21 prosecution witnesses had testified and were cross-examined by the defence lawyers.

Follow our live report of the court case here.