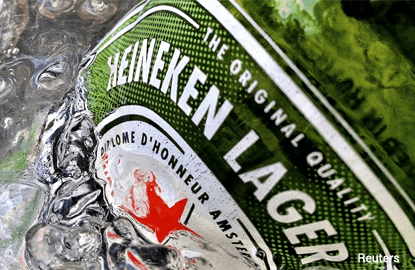 The Dutch brewer will become the second largest beermaker in Brazil, with a share of about 19%, behind market leader Anheuser Busch InBev SA. Including debt, Heineken said it would pay 1.025 billion euros (US$1.09 billion) for Brasil Kirin.

For Kirin it marks a departure from the Brazilian market, having paid some US$3.9 billion in 2011 for 12 breweries, a business which has subsequently lost market share and seen raw materials costs rise, due to a weak currency and rampant cost inflation.

Kirin said that Brazil's economic risks and a stagnant and competitive beer and soft drink market meant there were "limitations" to making Brasil Kirin profitable. Kirin said the unit made an operating loss of 284 million reais in 2016.

Brazil's economy is set to enter a third year of recession in 2017, but Heineken said that the nation's beer market was attractive in the longer term, with a premium segment growing faster than the market as a whole.

The acquisition will increase Heineken's presence in the north and northeast of Brazil, allow it to boost sales of the premium lagers Heineken and Sol and yield cost savings.

It already has five breweries in Brazil from its 2010 acquisition of the beer business of Mexico's FEMSA.

"None of the normal ratios work because it's loss-making, but it's a very attractive price," said Trevor Stirling, beverage analyst at Bernstein Research.

Some analysts have also said the deal is important, as it makes Heineken a stronger rival in a heartland of global beer leader AB InBev just as the latter has pushed into Heineken's markets elsewhere through its takeover of SABMiller.

The acquisition, dependent on approval by Brazil's antitrust agency, is expected to close in the first half of the year.

Shares of AB Inbev's local unit, Ambev SA, gained 0.5% to 17.22 reais in São Paulo, a sign the transaction allayed concerns of an imminent price war in the short run.

In the long term, however, "the reading of this news could be negative, because Ambev will have to cope with a stronger competitor," a client note by Banco BTG Pactual's trading desk said.

Kirin also said it had ended capital alliance talks with Coca-Cola Group, though the two companies would continue to discuss a potential operational partnership.