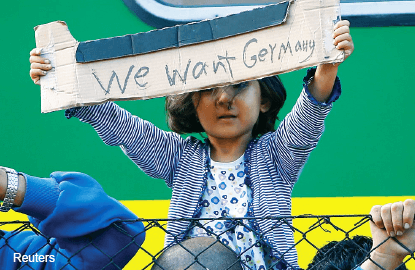 JUST before the coffee break, German foreign minister Frank-Walter Steinmeier finally cut to the chase. Dozens of German ambassadors had convened in the Foreign Ministry in Berlin to hear Steinmeier make a rambling defence of German diplomacy last month.

After ceding the floor to a panel discussion, Steinmeier unexpectedly clambered back onto the stage. “I don’t like to talk about leading. I prefer responsibility,” Steinmeier said.

Steinmeier’s unscripted remarks are telling on two levels: they show the unease over Germany’s pre-eminent role in Europe among not only its neighbours but Germans themselves.

Centuries of history weigh heavily against the few decades of the European Union (EU) as a peace-loving club of free-market democracies. In Germany, even the semantics of the word “to lead” — fuehren — are loaded because of associations with the Fuehrer, Adolf Hitler.

The crises facing Europe — the wobbly euro, Russia’s covert war against Ukraine, and a surge in migrants — have jolted Germans out of their comfort zone.

Inevitably, Europeans are turning to the continent’s richest, most populous country to come up with solutions for the issues of the day.

Hungarian Prime Minister Viktor Orban summed up the combination of resentment and respect felt in the EU’s poorer, smaller nations as he defended the rough treatment of refugees transiting his country.

“The problem is not a European problem,” he said last Thursday. “It’s a German problem.”

The memory of the Nazi past hangs like a shadow over Germany 70 years after the end of World War Two. Germans of Steinmeier’s generation — he is 59 — rarely display any feeling of national pride.

The German political establishment wraps itself in the European mantle out of a heartfelt belief in the EU as the best guarantor of peace and prosperity — but also out of a fear of the ghosts of German nationalism.

Poles, French or Italians do not suffer from any hang-ups about national identity. And they do not hold back from repeating negative stereotypes about Germany when no Germans are in the room.

Ironically, the biggest fans of increased German leadership in Europe are Russia and the United States.

Russian President Vladimir Putin is obsessed with recalibrating the balance of power in Europe — not with the EU or the North Atlantic Treaty Organisation (Nato), but with individual nation-states and their leaders who can be wooed, cajoled, and rewarded for their services.

An emasculated Germany, burdened with guilt for the Nazi attack on the Soviet Union and thankful for the Kremlin’s blessing of German reunification, is the most benign European hegemon imaginable.

As for the United States, President Barack Obama showed himself only too eager to abdicate American leadership in Europe. The hope was that Europeans had outgrown military confrontation, allowing the United States to focus on the Middle East and Asia.

When Putin marched into Crimea last year, the Obama administration was caught on the back foot and gratefully accepted Chancellor Angela Merkel’s initiative to defuse the Ukraine conflict.

For the White House, the diplomatic outsourcing was supposed to downgrade Ukraine as a regional problem and deny Putin the prestige of negotiating directly with the United States.

The so-called Minsk-2 agreement that resulted in February was more of a last-ditch effort to stifle a conflagration than some kind of new proactive German foreign policy.

In his summer speech to ambassadors, Steinmeier stuck to the descriptive over the visionary. “Germany has a responsibility in foreign affairs. In my view, today, that is not a question of choice or desire, but a description of reality,” he said.

It is easy to forget that Germany only won back full sovereignty 25 years ago, when the four World War Two Allies and occupying powers — the United States, the Soviet Union, Britain and France — approved the absorption of bankrupt, communist East Germany into rich, capitalist West Germany.

The challenges facing West German Chancellor Helmut Kohl back then were not unlike those with which the EU is grappling today: a refugee crisis, a common currency, and an unpredictable Kremlin.

Twenty-five summers ago, even before political reunification, Kohl pushed through monetary union, replacing the flimsy East German mark with the muscular Deutsche mark.

Stemming a mass migration of East Germans westward (during the summer of 1989) was one of the main drivers of Germany’s speedy reunification.

Another reason for Kohl’s haste was a cooperative regime in Moscow. As his attempts to reform the Soviet Union’s command economy faltered, Kremlin chief Mikhail Gorbachev was ready to accept much-needed loans in return for his approval of reunification and the withdrawal of the Red Army from German soil. Nobody could tell how long Gorbachev would hold out against hardliners at home, so time was of the essence.

Despite reservations within President George H Bush’s administration, the United States welcomed a united Germany, embedded in Nato, as a strategic anchor in a rapidly changing Europe.

Whatever his faults, Kohl has to be credited for his vision of a unified Germany at the heart of a unified Europe. He did not let economics get in the way of history-making, first introducing the Deutsche mark to East Germany and later paving the way for the euro.

Just as effortlessly as Germany regained its full sovereignty, the country turned around to trade in part of that sovereignty for the higher cause of European unity.

That Merkel would emerge as Europe’s most powerful leader should be attributed to Germany’s outsized economic weight rather than her strong sense of direction. No vision means no strategy. And the absence of strategy makes action, not to mention leadership, a scary proposition.

Just accepting the responsibility that Steinmeier talks about will require a deep change in German society.

Like it or not, Germany has become Europe’s Zentralmacht, or “central power,” thanks not only to its size but to its centrist politics and resistance to populism, political scientist Herfried Muenkler wrote in the Frankfurter Allgemeine Zeitung last month.

The political elite has accepted this new reality, but now it is high time for the rest of the country to hold an honest debate on Germany’s new role in the world, Muenkler argued. “If Germany fails in its tasks as Europe’s central power, Europe will fail.”

In the decades following World War Two, a divided Germany did not even carry full responsibility for itself, and criticism of US foreign policy, no matter how legitimate, often came with the preachy tone of the armchair activist.

Taking on the risks of leadership, with all the potential for disaster that implies, is difficult to do from a seated position. — Reuters