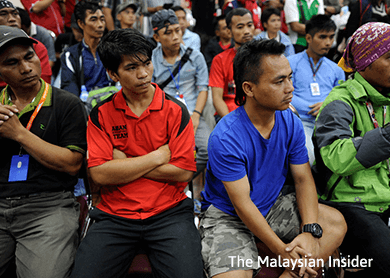 (June 9): Even after four days, Zainudin Mahlie is still reeling from the effects of the deadly drama which unfolded on the slopes of Mount Kinabalu last Friday.

This 35-year-old mountain guide looked on edge at the funeral of a friend and fellow mountain guide Valerian Joannes in Kampung Budu Tuhan, which nestles at the foot of the mountain in Kundasang yesterday.

He had not slept properly since the tragedy and had been attending one funeral after another.

Valerian, an employee of Mountain Torq, which organises mountaineering courses and activities at one of the challenging spots on the mountain called Via Perrata, was one of 16 people killed on Borneo's famed mountain last Friday by falling rocks shaken loose by a 5.9 magnitude earthquake whose epicentre was near the town of Ranau, about 20km away.

Zainudin said he needed a cigarette to calm himself down before talking to The Malaysian Insider.

He still could not fathom the fact that he was spared death with the decision not to climb last Thursday but placed a friend's life in danger instead.

“My service was specifically requested by a group but I couldn't make it as I had something urgent to attend to that day,” said Zainudin from Kampung Sunsuron in Tambunan.

“So I asked a friend who was free that day to take them up instead.

“Since we only make our earnings from guiding people up, my friend had no hesitation to take over my place.”

The fact that his friend and the six climbers in the group survived, albeit after a 20-hour ordeal before they reached Timpohon Gate, the starting point of the climb, without injuries, soothed his jangled nerves.

Zainudin (pic) said on hearing the news that climbers were stranded on the mountain by the quake, he rushed to the Kinabalu national park headquarters and made contact on his mobile phone with guide friends he knew who were on the mountain to find out what was happening.

“They told me what their situation was and made several requests which I first communicated with park officials and later to the search and rescue authorities they had been set up.

“They told me many climbers were gathered at a spot called 7.5km and there were several climbers who had serious injuries and had requested for a helicopter to airlift the injured.”

Soon, Zainudin became the unofficial intermediary between the guides on the mountain and SAR officials on the ground relaying messages and instructions back and forth.

“They requested for helicopters not only to airlift the injured but also all the climbers as they were exhausted, cold, running short on food and water and some were beginning to show signs of panic,” he said.

“The path at Sayat Sayat Hut (a checkpoint where a park staff makes the head count of everyone passing it and a mere 500m away) was obliterated. It was blocked by a pile of rocks.”

It was only later that they found the situation was similar at Via Perrata and Laban Rata, a rest stop area for climbers.

The park official manning the checkpoint at Sayat Sayat Hut reportedly managed to flee in time.

Help however was slow in coming, Zainudin said.

He only heard the drone of a helicopter some three hours after he passed the request for one.

“I quickly told my friends the helicopter was on the way and they were euphoric.”

Not long after, Zainudin was forced to relay the grim message that the helicopter could not land due to heavy fog shrouding the area and that the climbers were to stay on the mountain overnight and wait for another attempt to airlift them out the next day.

That message, he said, was met with a hail of profanities.

To resupply them with the requested food and water, the helicopter dropped “two boxes containing what we won't know” down from height and the boxes fell into a gully which the guides could not retrieve.

That incident was described by a climber, who posted in his social media that “the helicopters came to drop off two boxes of supplies but they dropped off over the cliff onto land slides when there was a huge expanse (of ground) they could have aimed for”.

The climber also posted that “fog was quoted as the reason for not rescuing the climbers”.

“That was certainly true earlier in the day. But the sky cleared beautifully and the air was still by 4pm. But they were determined to leave us up there in the overnight cold, (in) hunger and potential flash flooding if it rained.

“The whole government emergency response was a farce,” the climber added.

The two climbers, who had fractured their legs, were carried on makeshift stretchers down.

The trek down began around 4pm and by the time they reached safety at Timpohon Gate, many of them had not slept in 24 hours. Zainudin said the whole tragedy would not make a lesser man afraid of climbing up the mountain again.

He has three weeks to regain his composure while the mountain is closed to all climbing activities.

Some park officials believed it could be longer, up to a year.

In that time, Zainudin said he would volunteer to help clean up the mountain and find new paths.

He said the climb up the mountain when it is reopens “will certainly be more challenging”. – The Malaysian Insider