According to analysts’ estimates, forecast earnings for FY20 for GenM has been cut by 32% to 39%. (Photo by Cheryl Loh) 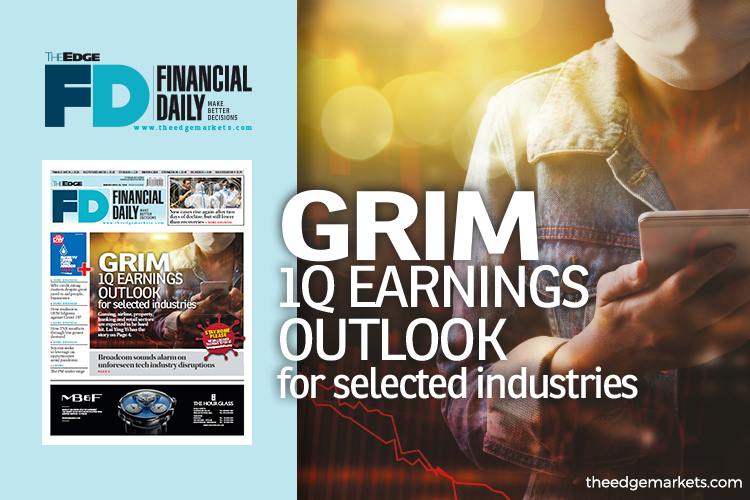 KUALA LUMPUR: The International Monetary Fund expects a recession in 2020 that will be at least as bad as the one seen during the global financial crisis in 2009, against a highly challenging global economic outlook, due mainly to the Covid-19 pandemic.

Bank Negara Malaysia (BNM), meanwhile, has revised downwards its gross domestic product (GDP) growth projection for Malaysia in 2020 to between -2% and 0.5%.

The central bank said Covid-19 had significantly weakened global growth prospects, with the outlook heavily contingent on how countries across the world successfully contain the pandemic over the remainder of the year. At the same time, the domestic economy will be impacted by the necessary global and domestic actions taken to contain the outbreak. Tourism-related sectors, in particular, are expected to be affected by broad-based travel restrictions and travel risk aversion.

In terms of factory production, economists project a steep fall in the Industrial Production Index in March and possibly months ahead, while production disruptions in the global supply chain will weigh on the manufacturing sector and exports.

This comes in the wake of the Global Manufacturing Purchasing Managers’ Index plunging to 47.2 points in February, the weakest since 2009.

According to an online survey by the Department of Statistics carried out on March 23-31, the movement control order (MCO) had a deleterious effect on monthly spending, with total household expenditure falling 55% to RM2,813 from RM6,317.

Notably, higher-income households reported steeper declines in spending due to the greater proportion of discretionary items and non-consumption expenses in their expenditure baskets. In particular, the top 20% income group (T20) households cut outlays by 63%, followed by the M40 group cutting down spending by 54% and the B40 trimming expenditure by 49%.

In terms of spending categories, apart from food staples, communications and education, all other categories of consumption registered sharp declines due to travel restrictions and closures of non-essential businesses.

Specifically, spending on clothing and apparel dropped 95%, followed by transport (down 89%), as well as restaurants and hotels (down 86%). Meanwhile, big-ticket spending such as on household furniture and recreational expenses have both fallen by 70%.

The normalisation of consumer behaviour may be gradual as precautionary social distancing practices continue, suggested by anecdotal evidence from China, which has emerged from its lockdown.

The gloomy outlook for Malaysia’s private consumption, which makes up 59% of GDP, suggests that corporate earnings are highly likely to tread water down the road.

Kenny Yee, the head of research at Rakuten Trade, told The Edge Financial Daily that the Covid-19 impact will not be captured fully in the first quarter of the year.

Nevertheless, he expects overall corporate earnings for financial year 2020 (FY20) to contract in a single-digit range.

In chronological order, Yee opined that earnings for the gaming industry, comprising casino and numbers forecast operators, will be affected the most, followed by the airline, property and banking sectors.

This comes as the unprecedented worldwide shutdown of all of Genting Group’s casinos, following the lockdown orders issued by authorities, have resulted in a synchronous loss of income streams to the group. According to analysts’ estimates, forecast earnings for FY20 for Genting Malaysia Bhd (GenM) has been cut by 32% to 39%.

Meanwhile, the MCO has led to the closure of numbers forecast operations for one month, equivalent to 13 draws to the operators.

Analysts estimate the bottom line of Berjaya Sports Toto Bhd and Magnum Bhd to be down by 9% and 8% respectively.

“With a month’s loss of revenue, paired with humongous overheads, airline operators might book in huge losses for the coming quarter,” Ang said.

According to CGS-CIMB’s estimates, assuming 20% of the sales in advance of carriage is refunded, due to AirAsia Group Bhd’s many flight cancellations, then the remaining cash balance of RM2.4 billion can pay for the group’s fixed costs for less than five months under the current conditions.

Airport operator Malaysia Airports Holdings Bhd (MAHB) is also expected to be hit by passenger traffic growth and potential tariff rebates or discounts on its retail rentals. This is especially when AirAsia has temporarily suspended all international and domestic flights in Malaysia.

As such, analysts have cut their earnings estimate for MAHB for FY20 by 32.3% to reflect the lower passenger traffic, lower airport traffic and lower average retail spending at airports. In terms of the property sector, an overhang in sales is likely to be exacerbated as demand for big-ticket items are likely to vanish due to a grim economic outlook. Based on the latest figures, aggregate property sales have declined by 12% year-on-year.

Overall, the research house expects banking sector earnings to fall 5% in 2020 on the back of NIM slippage, softer loan growth and higher credit costs. It has downgraded its ratings for CIMB Group Holdings Bhd and Malayan Banking Bhd to “neutral” from “buy”, mainly on concerns over higher asset quality risks.

As for discretionary goods retailers such as apparel chain operator Padini Holdings Bhd with staff’s basic salaries as well as lease and financing expenses commanding a major part of fixed expenses, analysts noted that successful negotiations for a rental waiver or rebate would translate into immediate cost savings to the group.

Nonetheless, due to a lacklustre consumption outlook, analysts have cut their earnings estimates for Padini for FY20 by 33% on the back of a revenue projection cut of 13%.

Shopping mall owners such as Sunway Real Estate Investment Trust (REIT), Pavillion REIT and IGB REIT, which have offered 14-day free rental for non-essential retailers during the first phase of the MCO, are also likely to see downward pressure in their upcoming earnings results.

Analysts have cut by 19% their earnings forecast for the REIT sector by incorporating an 8% year-on-year decline in shopping malls’ 2020 base rent and assuming no turnover rental in the year.