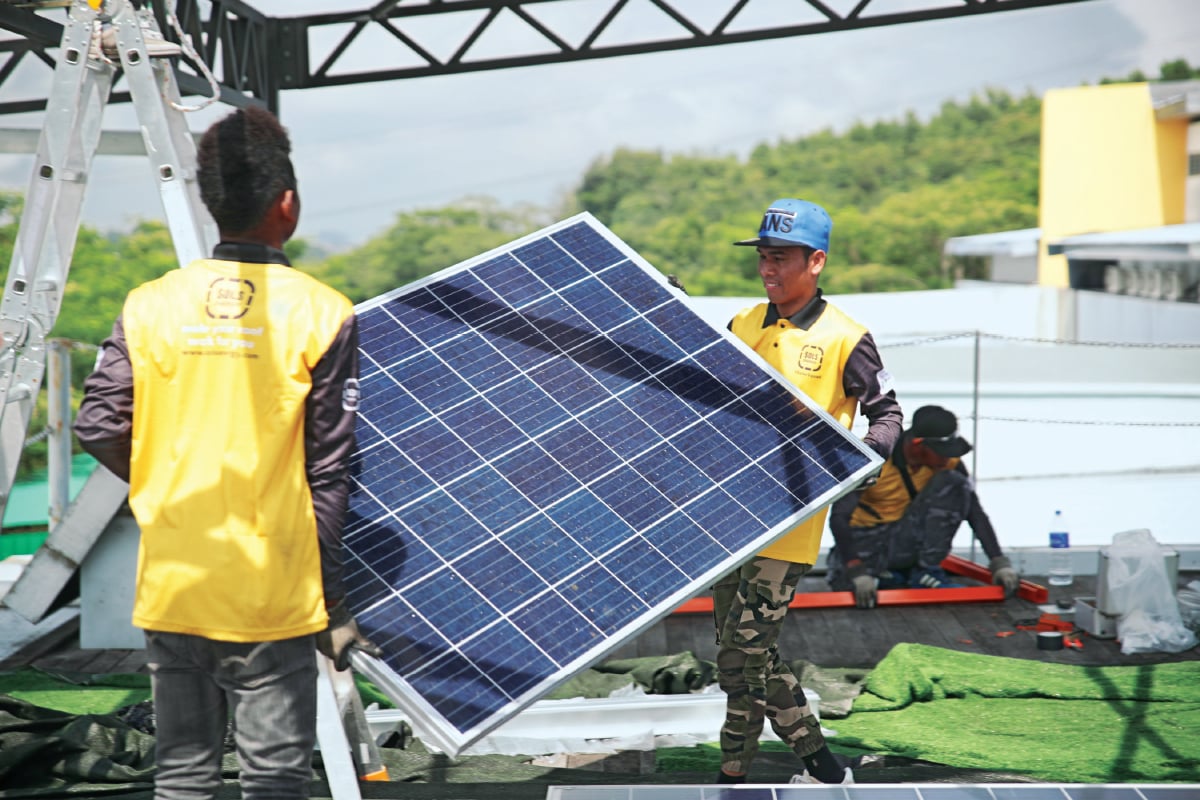 Green technology has been around for a while but, with growing awareness of issues such as climate change, it is finally gaining mainstream adoption and attention.

The opportunities are vast, especially in the renewable energy sector, where the pace of adoption in recent years has accelerated. More countries are pursuing net zero carbon emission goals, and consumers are voting with their wallets to support companies with more sustainable practices.

Why the energy sector? Simply put, it is the largest contributor to global greenhouse gas (GHG) emissions, according to the United Nations (UN). That is also the case in Malaysia, where the energy mix comprises natural gas, followed by oil and coal.

“In 2015, Malaysia agreed to cut 45% of GHG emissions by 2030 in the Paris Agreement. The awareness about the problem is present and more players are participating in the industry now,” says Shamsul Bahar Mohd Nor, Malaysian Green Technology and Climate Change Centre (MGTC) CEO.

The government has introduced many incentives intended to spur the adoption of renewable energy technology in Malaysia. For instance, the Green Technology Financing Scheme 2.0 (GTFS) allows companies to apply for financing from banks, with the government guaranteeing 60% of the amount and providing a 2% rebate on the interest or profit rate charged.

“This has created interest among players in green technology and provided them with an easier pathway to obtain financial assistance,” says Shamsul.

Other popular government incentives include the Green Investment Tax Allowance, which is applicable to companies that use green technology services listed in MGTC’s MyHIJAU directory. Meanwhile, the service providers in the directory qualify for the Green Income Tax Exemption. "If the government doesn’t create favourable renewable energy policies, you are not going to get start-ups to grow in this area.” - Raj (Photo by SOLS Energy)

The discontinued Feed-in Tariff and its replacement, the Net Energy Metering (NEM) scheme, are also popular incentives that allow renewable energy generators to sell excess electricity back to the grid.

The quota was fully subscribed by end-2020, when the scheme expired. Last December, the government introduced the third version, which will end in 2023.

It’s all about the money

Another driving factor for the growth of green technology in Malaysia is the participation of banks, which are increasingly open to financing renewable energy projects. That was not the case in the past, says Shamsul.

“Initially, banks were not as receptive because they were still trying to figure out what is green and what is not. MGTC began to educate the banks on this topic, explaining to CEOs about green or climate technology. If they can offer a product to green tech players, it can make them more competitive.”

Many banks now offer loan programmes specifically for commercial, industrial and residential clients that want to install renewable energy systems in their premises. They are also financing Large Scale Solar and other renewable energy projects, such as biogas and waste-to-energy ventures.

As a whole, financial incentives from the government and financing opportunities from banks, coupled with declining material costs, are accelerating the adoption of renewable energy technologies in Malaysia. "Instead of building a huge dam that costs billions of ringgit, we can have small hydropower stations to generate electricity.” - Shamsul (Photo by MGTC)

“Solar power is not new. What has happened is that installing solar power systems is now extremely affordable and readily available, so much so that even homeowners can generate electricity from their roofs,” says Raj Ridvan Singh, founder and CEO of SOLS Energy, a solar power system installation company.

The second version of NEM accelerated the adoption of solar power systems, he adds, as did the support from financial institutions. Consequently, this contributed to the growth of his business.

“We are also working with multinational corporations and companies through corporate-employee programmes to encourage their employees to adopt renewable energy,” Raj says.

SOLS Energy, which focuses on the residential market and runs an academy to equip underprivileged youths with technical skills in the solar industry, received investments from global venture capital firm 500 Startups in 2018. Last year, it obtained funding from Petronas Ventures, the investment arm of the oil and gas giant.

These high-profile investments highlight another driving factor: the availability of funds to support green technology innovations. This could be in the form of investments from companies or investors that want to diversify away from oil and gas. It could also be grants from international bodies such as the UN, aimed at building the capabilities of developing countries.

One such facility is the Malaysia-UK PACT (Partnership for Accelerated Climate Transitions), which finances areas such as energy and green finance. It is funded by the UK government through its International Climate Finance portfolio.

“Finance is so important in unlocking the potential of green technology because many investments in the past were rooted in the carbon pathway. A lot of money was invested in [carbon-intensive industries such as] the automobile industry. Now, systems change and capex (capital expenditure) is required to shift the world into a low-carbon pathway,” says Khairun Nisa Zabidi, UK PACT lead in Malaysia.

The first Malaysia-UK PACT call for proposals was concluded last October. Successful applicants will receive a grant to run a project in related areas, which will be announced in early March.

Within the renewable energy technologies sector, many opportunities remain. A major one is the use of hydrogen to generate electricity.

“We are still in the infant stages. There is an abundance of hydrogen on Earth, it’s just a matter of converting it into an energy carrier. Japan, for instance, is buying grey hydrogen from Brunei. Grey hydrogen is made from natural gas, while green hydrogen can be produced using solar energy [to split water by electrolysis],” says Shamsul. MGTC has had many engagements with the Sarawak government on this topic. The state already has at least five vehicles with fuel cells powered by hydrogen. “Universiti Kebangsaan Malaysia and Universiti Teknologi Malaysia can already produce fuel cell batteries, which they call a fuel cell stack. They just need to commercialise the technology, and MGTC will support them,”,” he says.

The mileage of fuel cell vehicles powered by hydrogen could be four times that of electric vehicles, says Shamsul. The generation of grey hydrogen for transportation could generate additional revenue for the oil and gas sector.

“We also have to look at producing green hydrogen. Perhaps we can build hydrogen filling stations that use solar energy. We need to develop these technologies and educate the public,” says Shamsul.

In addition, many innovations are still needed to accelerate the growth of other sources of renewable energy, such as biomass and hydropower.

“[Managing] biomass can greatly contribute to the reduction of GHG. A lot of technology in this area comes our way. Recently, two companies introduced biodegradable plastic made from oil palm trunks to us,” says Shamsul.

Other than the generation of renewable energy, there also needs to be innovation in the delivery infrastructure, says Khairun. “Upgrading grid technology is necessary to deliver renewable energy on a larger scale than what is available at this time.”

“For instance, in Europe, used furniture is not sent to the landfill but, instead, collected and remanufactured into new furniture. The circular economy involves the refurbishment, repair and reuse of materials. Leasing is also part of the model, where you don’t purchase a computer but lease it. When you are done with it, it is sent back to be reused or refurbished into new computers,” says Shamsul.

How can these emerging areas be tapped by Malaysian entrepreneurs, and how can green tech start-ups be supported? Raj believes the government should play an important role.

“If the government doesn’t create favourable renewable energy policies, you are not going to get start-ups to grow in this area,” he says, adding that the potential for industry players is still huge.

“I keep telling my team that there are 2.2 million roofs suitable for solar power in Malaysia. No one company is going to be able to serve them all.”

Shamsul, on the other hand, encourages companies to not just rely on incentives to grow but to seek financing opportunities from financial institutions and investors. MGTC will also continue to work with universities to translate research into commercial products, he adds.