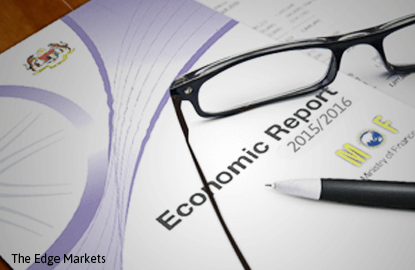 KUALA LUMPUR (Oct 23): The Malaysian government has set out reduced expenditure targets in the new Medium-Term Fiscal Framework 2016 to 2018 (MTFF) to ensure the nation meets its fiscal consolidation commitments, and expects its mid-term fiscal deficit to average 2.7% of GDP within the three-year period.

Towards this end, it has set an indicative ceiling for total operating expenditure (OE) at RM685.7 billion or 17.1% of GDP for 2016 to 2018, while allocation for development expenditure (DE) will be contained within the 11MP total ceiling of RM260 billion.

“Firm commitments to set an enveloped expenditure for the three year framework, will enhance the government’s capacity to manage expenditure and implement reforms, guided by the medium-term agenda outlined in the 11MP (11 Malaysia Plan),” the Economic Report 2015/2016 report stated.

The MTFF will set the total OE ceiling for each ministry, to achieve optimal level of spending.

“Among the measures to contain expenditure include gradual subsidy rationalisation through a more targeted mechanism, cost-effective procurement and streamlining the civil service, as well as further encouraging government entities to be financially independent and less reliant on grants,” the report stated.

The government projects its current balance to remain in surplus at an annual average of 1.1% of GDP in the three-year period, as compared to 0.8% estimated in 2015.

Thus, the mid-term fiscal deficit is targeted to average 2.7% of GDP, within the three year period.

Total revenue during the period is expected to constitute 18.2% of GDP, with tax revenue making up 14.9% of GDP and non-tax revenue at 3.3% of GDP.

Oil-related revenue is estimated to account for 2.4% of GDP during the MTFF period, as compared to the estimated 3.8% this year.