Goodbye MRT 3: How badly will the property market be hit? 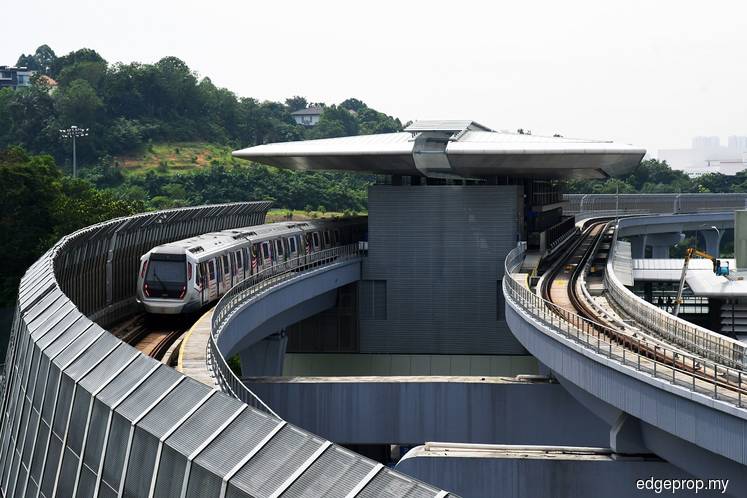 PETALING JAYA (May 30): The government has derailed yet another mega project — the latest casualty being the third mass rapid transit (MRT 3) line.

Otherwise known as the Circle Line, the proposed line skirts the edges of Kuala Lumpur City Centre and is believed to feature 11 stops running through densely-populated areas.

The line was meant to integrate the first two MRT lines as well as all rail transportation.

Property values will not suffer

Most real estate experts who spoke to EdgeProp.my do not see the scrapping of the MRT 3 as a huge blow to real estate values.

Stephen Yew, co-founder and executive director of The One Property International Sdn Bhd, does not think that the impact of the MRT 3 cancellation will be significant as the areas along the alignment are mature townships.

“Local property prices are supported by many factors and the upgrading of the transportation system is just a plus.

“Furthermore, the impact of MRT 3 (on property price growth), if it materialises, will not be seen immediately. It will take a few years to reflect on local property prices,” he pointed out.

Public transport needs to be addressed

However, they do agree that there are urgent public transportation needs that must be met, and alternatives need to be figured out as soon as possible.

CBRE|WTW managing director Foo Gee Jen said the MRT lines will be incomplete without the MRT 3.

“Some of the developments surrounding MRT Line 3 have been given a high plot ratio for development with the anticipation of the scheduled completion date, [and with the scrapping of the MRT 3] this will affect the efficiency and day-to-day business process,” he highlighted.

He observed that the MRT 1 line’s ridership is “not that fantastic” owing to a lack of connectivity from the MRT 2 and 3 lines.

“The government need to do something about this and should reconsider the decision because Kuala Lumpur is a business centre and it would require good connectivity,” he said.

He said the decision to scrap the MRT 3 should not be final, as there is a need for a multiple model transit system which could connect the existing rail transportation, including LRT, MRT, Monorail and KTM.

“However, the cancellation of MRT 3 also means that there will be a need for alternatives, such as increased bus or coach services, to connect the missing links of the existing public transportation system,” he explained.

Although he agreed that rail transportation is a good option for public transportation, other alternatives could also be considered if they serve the purpose and with lower cost.

He also urged the government to seek consultation from industry players to have a better understanding in reviewing the rail transportation projects.

RHB Research Institute Sdn Bhd senior analyst Loong Kok Wen said urbanites, who would form the bulk of commuters on the MRT 3 line, would not lack public transport alternatives to shuttle around the city.

Loong, who is surprised with the PM’s decision to cancel MRT 3 just a day after the government announcement of scrapping off the RM110 billion Kuala Lumpur – Singapore high speed rail (HSR) project, described the axed rail projects as “good for the people”.

“However, if the construction costs will increase the country’s financial burden, the government will need to make the right decision,” she told EdgeProp.my via a phone interview.

An anonymous analyst meanwhile said there have been anecdotal reports that people living in the outskirts who travel via the MRT only save a little compared with driving and paying tolls as the tickets are not cheap, although these reports need to be corroborated with research.

Circle Line may make a comeback?

Meanwhile, MAG’s Goh stressed that if the government does plan to bring the Circle Line back in the future, the focus should be on optimising the population catchment rather than just benefitting property or land value.

“The property market will see a positive impact if the station really serves people’s need and attract more people to use the public transportation system. However, a rail system designed for property or land value enhancement will not have the same results,” he said.

Some experts do see developers, especially those who have invested in land along the alignment, as losing out on the MRT 3 line cancellation.

“It [the decision to call off the MRT 3] will impact the developers, who bought and planned developments along the MRT 3 line and were banking on the potential of value appreciation.

“This (the cancellation of MRT 3) will [also] inject more uncertainly into the current soft property market, especially following the dampened infrastructure construction sector. I foresee in the industry maybe be a property glut in the short term.”

RHB’s Loong concurs, saying: “The property market has been [suffering from] weak sentiment for quite some time due to a lack of catalysts. The announcement to scrap the MRT 3 will put on more uncertainties to the market.”

However, most of the experts are holding out for the circle line to be brought back in the future.

The One Property International’s Yew said: “I believe the cancellation of MRT 3 will not be forever. The freeze is just for the time being while the new government needs to prioritise other issues. I have no doubt that the upgrade of city’s transportation infrastructure plan is part of the long-term development plan.”