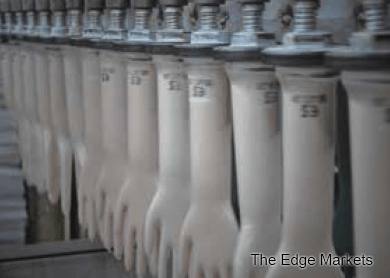 KUALA LUMPUR (Oct 21): Gloves counters are on the rise today on the back of expected boost to earnings driven by the weakening ringgit and low material prices, with Top Glove topping its peers by rising 67 sen or 7.4% to RM9.77.

Top Glove, which achieved a record high profit for the financial year ended Aug 31 (FY15), saw its share price leading its peers this morning. As at 11.50am, the world's largest rubber glove manufacturer gained 48 sen or 5.3% to RM9.58 and was the top gainer on the bourse. It saw 2.92 million shares traded.

Year-to-date, Top Glove has risen 112%, while Kossan and Supermax have gained 89% and 30% respectively.

Although the current trends, such as strong US dollar, low material costs and high demand for gloves, are positive for the sector, Hong Leong Investment Bank (HLIB) glove sector's analyst Abdul Hadi Manaf noted that the fundamentals are varied among the glove makers due to their different exposures to the US dollar.

"When one counter do well, they are expecting the other counters to do well, but that's only the emotion part, not based on fundamental," Abdul Hadi told theedgemarkets.com over the phone, adding that investors are expecting good results from other glove makers after Top Glove had delivered a record high profit.

"The share prices have run so much for the (Top Glove's) competitors, but fundamentally may not be the case as their US dollar exposure is different," Abdul Hadi explained.

"Yet, for Top Glove, most of the costs are in ringgit. That's why the company is the prime beneficiary of strong US dollar," he added.

HLIB lifted Top Glove's target price from RM9.49 to RM10.98 after factoring in the higher US dollar rate in forecast, which in turn resulted in their earnings per share for FY16–18 to be lifted by 13%–17%.

A senior analyst for a stock broking firm also said that the uptrend is expected because of the strong demand for gloves and continued weakening of local currency.

"If you look at their operating environment, it is conducive with low material prices, solid demand and helped by the declining ringgit," he told theedgemarkets.com over the phone.