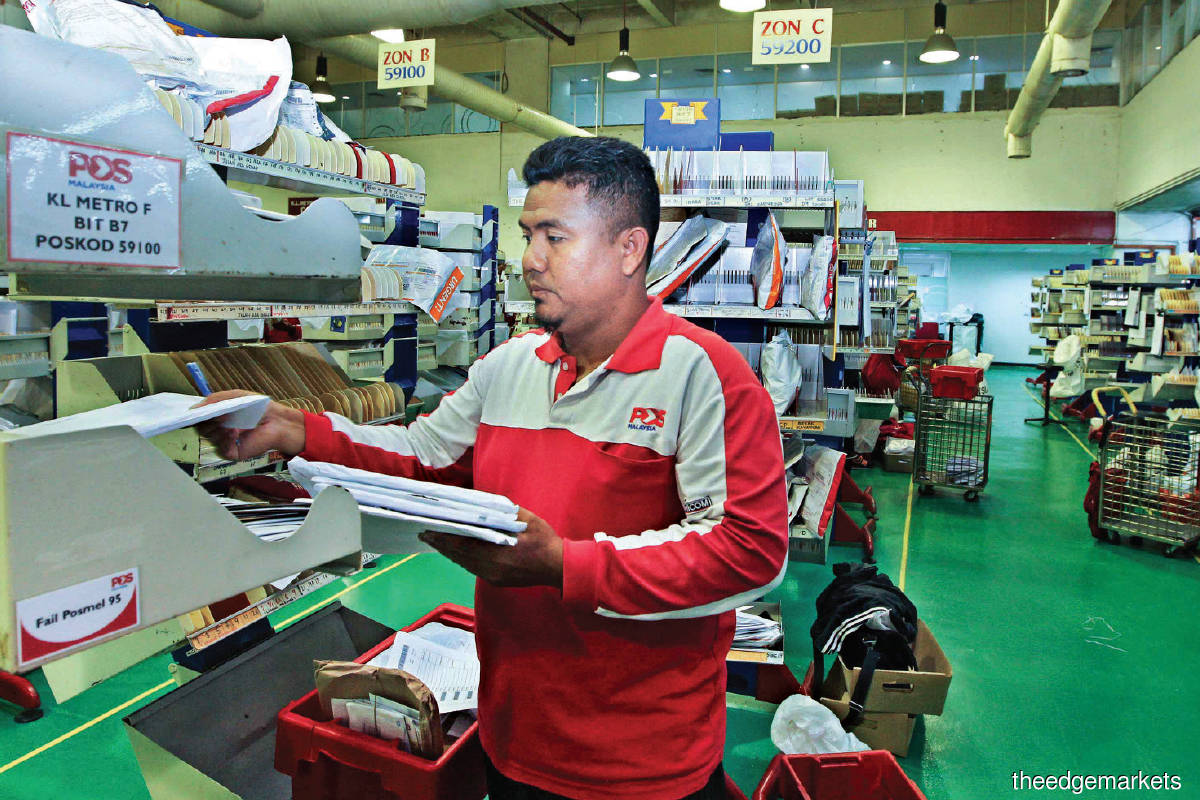 Beginning in 2020, Pos Malaysia combined postal and courier services into one segment. The combined segment reported a loss of RM45.7 million in the half year ended June 30. (Photo by Kenny Yap/The Edge)

THE Malaysian Communications and Multimedia Commission’s (MCMC) decision to freeze the issuance of new licences for courier services for two years will provide the crowded field with some respite, although competition will remain extremely stiff.

The freeze, effective Sept 14, has been lauded by local industry players, which are concerned about the existence of too many courier service companies, especially given the influx of foreign-owned ones. The high number of players has also led to the fragmentation of the industry, says Pos Malaysia Bhd CEO of postal services Mohamed Rozaidi Md Sharif.

Responding to questions by The Edge, ­Rozaidi says the situation has led to there being only a few local operators providing services nationwide, while many smaller ones serve pockets of regions within the country.

“This results in an overly crowded playing field within these regional pockets, providing thin profit margins, [and] hindering long-term sustainability and growth for the industry,” Rozaidi said in a media statement following the MCMC’s announcement on Oct 26 that it would not accept any applications for new licences for all categories of courier services made after the start of the moratorium date, until Sept 15, 2022.

The moratorium will allow the government and postal and courier operators to come up with a new action plan — to be crafted through the National Postal and Courier Industry Lab (NPCIL) — to strengthen the industry.

The NPCIL will be held over three weeks, from Nov 2 to 22, subject to Conditional Movement Control Order (CMCO) directives by the government.

In the statement, Rozaidi says the result of the NPCIL is important for local industry players as it will chart a roadmap for the industry as e-commerce and the digital economy reach greater heights in the country.

A clear vision would also encourage local players to make greater investments and contribute towards the long-term sustainability of the industry. Service level performances are also expected to be improved, he adds.

There were 109 courier service licence holders in the country as at October, operating in various categories of postal and courier services, the MCMC says.

Based on the commission’s pocket book of statistics for postal and courier services, this number has been declining since 2017, when there were 128 licence holders, to 119 in 2018 and 116 a year later.

While the number of courier service companies has fallen, the infrastructure has been improving at a rapid pace, according to the 2019 pocket book of statistics.

Gateway infrastructure — a point at which freight moving from one area to another is interchanged between transportation lines, usually at an airport — had also risen multifold to 298 in 2019, from 12 in 2016 and 10 in 2017.

This shows that while the high number of licence holders may have resulted in cut-throat competition, it has also led to greater investments in logistical infrastructure in the country.

However, the companies may not have been rewarded with adequate returns from their infrastructure investments. Looking at the financial performance of Bursa Malaysia-listed postal and courier service companies for the past five years, it is arguable that the investments have paid off. And even if they have, the process has been slow.

Beginning in 2020, Pos Malaysia combined postal and courier services into one segment. The combined segment reported a loss of RM45.7 million in the six months ended June 30, 2020.

CEO and group managing director Teong Teck Lean told The Edge in a text message last Wednesday that the licence moratorium shows the regulators are engaging with the industry.

“I am confident that the regulators are supportive [of the industry’s requests] that more incentives are needed for the industry, and definitely, it will benefit us if we are able to get incentives,” he says.

The boom in e-commerce in recent years has led to the proliferation of courier services in the country. Even foreign companies have found the prospects attractive.

Notable overseas-based last-mile delivery companies now in Malaysia include Ninja Van, GrabExpress and uParcel from Singapore, J&T Express and Lalamove from Hong Kong and SkyNet Worldwide Express from the UK.

Of course, global giants like ­FedEx Corp and its subsidiary TNT Express, Deutsche Post’s DHL Express, and United Parcel Service have been operating in Malaysia for years, even before the e-commerce boom.

Companies whose core business is not in last-mile delivery services have also set up or partnered with courier service providers to form new ventures.

For example, in February 2017, Bison Consolidated Bhd, the operator of myNews convenience stores, collaborated with EasyParcel, a web-based parcel service consolidator, to form Pgeon, a drop-in centre service located at all myNews outlets. According to Pgeon’s website, the service is now available at more than 3,000 retail outlets across the country.

A month later, Yamato upped its stake to 22.8% by acquiring 137.42 million shares at RM1.74 each from Singapore Post Ltd (SingPost) and from Teong. Yamato is now the second largest shareholder of GDEX after Teong, who founded the company. SingPost first emerged as GDEX’s substantial shareholder in March 2011, after acquiring 56.84 million shares for RM45.47 million.

Tycoon Tan Sri Robert Kuok also enlarged his investments in the sector. His Hong Kong-based Kerry Logistics Network acquired a 51% stake in Sabah-based ABX Express (M) Sdn Bhd in 2015 for an undisclosed amount and, in 2018, made the company its wholly-owned subsidiary.

Founded in 1984 in Labuan, ABX Express now has more than 100 branches nationwide.

While the moratorium provides a bit of a breathing space for the courier service companies, AmInvestment Bank observes that without any meaningful consolidation in the industry, the playing field will remain crowded.

“We believe the new norms (accelerated digitalisation, social distancing, proliferation of online shopping, and others) in the aftermath of the Covid-19 pandemic are positive for the parcel delivery segment.

“However, this is offset by an overly crowded playing field with cut-throat competition resulting in razor-thin margins,” the investment bank says in an Oct 27 report.

AmInvestment has a “hold” call on Pos Malaysia with a target price of 90 sen, valuing the group at its historical book value multiple of 0.51 times.

MIDF Research has a “neutral” call on GDEX, with a target price of 34 sen, which is 6.85% lower than its closing price last Wednesday of 36.5 sen.