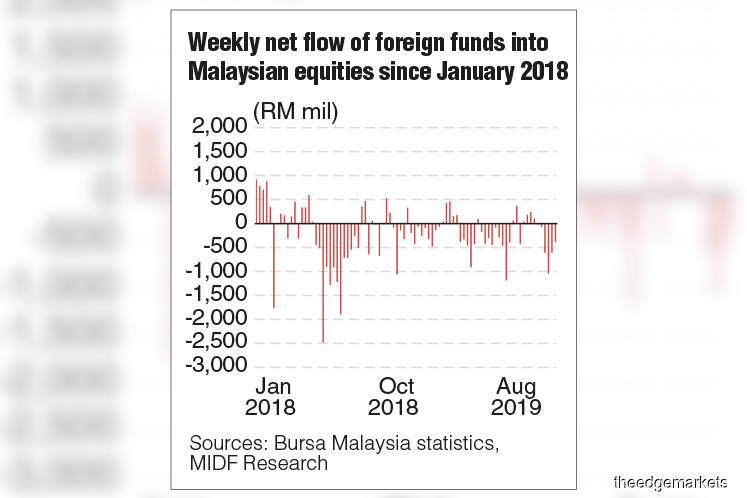 He said that on the external front, US President Donald Trump had said the US is negotiating with China but is not prepared for a deal.

“Foreign net selling activity slowed down the next day to RM54.6 million as tables were turned after the US plans to extend for another 90 days a limited set of exemptions that had protected US businesses from a restriction to deal with Huawei Technologies Co Ltd.

“Nevertheless, the foreign net outflow gained momentum on (last) Wednesday to reach RM126.9 million as foreign investors returned to the sidelines ahead of the Fed’s (US Federal Reserve) July meeting minutes,” he said.

Adam said optimism returned last Thursday with foreign net selling receding to RM49.1 million net after the minutes of the Fed’s July meeting highlighted the rate cut was viewed as an insurance against headwinds from the trade war.

“(Last) Friday continued to see a decline in foreign net selling activity to a lower level of RM42.6 million, coinciding with the 0.4% gain in the local bourse.

“This was in conformity with other regional peers, namely Indonesia and Taiwan, ahead of the Jackson Hole address by Jerome Powell,” he said.

Adam said with a week left before August ends, Malaysia had seen a foreign net outflow of RM142.1 million.

He said on a year-to-date basis, the foreign net outflow from Malaysia stands at RM7.02 billion, making up around 60% of last year’s total foreign net outflow. Adam said in terms of participation, only foreign investors experienced a weekly drop of 8.5% in the average daily traded value (ADTV) to reach below the RM1 billion mark of RM899 million. He said this is the lowest ADTV in seven weeks.