Lifestyle
From The Edge
DigitalEdge 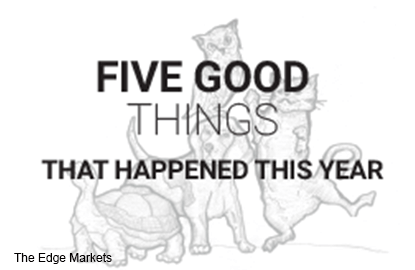 Recent headlines in Malaysia have been shouting disaster after disaster, making it easy to overlook some of the more positive things that happened this year.

After hours of poring over the news (and pulling our hair out), we managed to unearth a list of “happier” headlines that gave us some cause for celebration in 2015.

The Animal Welfare Bill is passed

After four years of being debated in Parliament, the Animal Welfare Bill was finally passed on June 17, promoting animal welfare and responsible ownership of animals. The bill protects our furry friends against abuse, killing by shooting without reasonable cause, pesticides poisoning and involvement in animal fighting ventures. It also puts Malaysia on par with other members of the World Organisation for Animal Health.

The darling of Malaysia’s sporting scene, Datuk Nicol David, has now broken the record for holding the World No 1 title for the longest time. In February, Nicol — who has won the World Open a record eight times — beat the 105-month record set in 1993 by four-time world champion, New Zealander Susan Devoy. As at July, Nicol had recorded her 108th month as world champion.

Startups and entrepreneurs can now officially raise capital via equity crowdfunding after the Securities Commission Malaysia approved six equity crowdfunding platforms in June. Equity crowdfunding essentially involves raising smaller amounts of money from a diverse portfolio of investors, often by pitching on an online platform. The six platforms currently available in Malaysia — Ata Plus, Alix Global, Crowdonomic, Eureeca, PitchIN, Propellar Crowd+ — will connect investors such as venture capitalists and the public to the startups they host.

After a ground-breaking ruling by the Perlis Fatwa Committee last July, child custody battles will no longer be settled on the basis of religion. Whichever parent is best equipped to care for the child will be given custody. This includes breastfeeding mothers and, where the child is old enough to decide, who he or she chooses to live with.

The recent discovery of debris from a Boeing 777 plane on the coast of Reunion Island in the Indian Ocean raised hopes that MH370 had finally been found a year after its disappearance. Prime Minister Datuk Seri Najib Razak announced that tests “conclusively confirmed” the debris indeed belonged to the missing jumbo jet, which was carrying 239 passengers at the time of its disappearance.