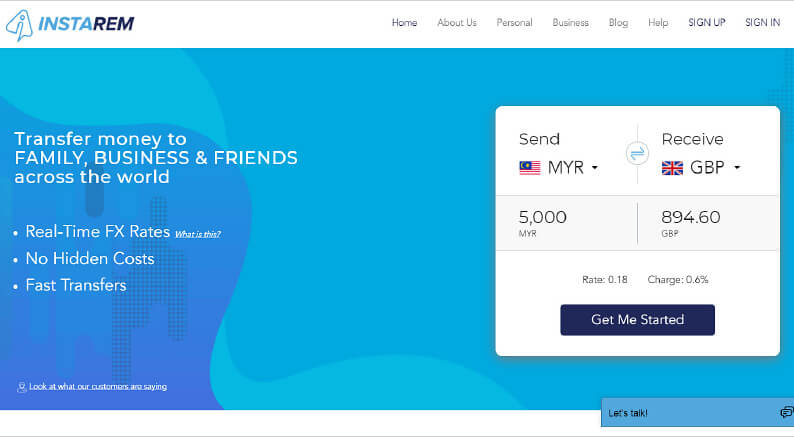 The remittance of money overseas, from sender to recipient, is inefficient. There is a lack of transparency on transaction costs and a lack of currency options for the parties involved, which could deter potential users of such services.

Senders may anticipate a transaction fee at the point of remittance, but what they do not expect is the possibility of the funds being hit with another transaction charge by the recipient bank, according to InstaRem chief business officer Pratik Gandhi. Furthermore, neither the sender nor the recipient is informed on what the exact charges are before the transaction takes place.

“This is what usually happens with the banks, so you do not really know the exact amount that your beneficiary at the other end is going to receive. And this [hidden cost] will be a continuous issue because you need to keep sending money to that other country, especially if you are a parent sending money to your children studying overseas,” Pratik explains.

These transaction costs can also be very prohibitive, he says, citing a World Bank report on the cost of remittances worldwide. According to the bank’s December 2017 Remittance Prices Worldwide report, the global average transaction costs stood at 7.09% as at the fourth quarter of last year. As for money transfer operators (MTOs), the International MTO Index was 8.23% last quarter, according to the report. Banks were found to be the most expensive type of service provider, with an average transaction cost of 10.44%.

Remittances can also take a long time to clear given that there are built-in processes that need to take place between transacting banks, or between two international MTO branches. The processing time can take up to three or four business days, depending on the financial institution.

“At the end of the day, what customers look for is very simple: they want low transaction costs to begin with, transparency on the costs, as well as speedy transactions. This is a very difficult combination to achieve,” says Pratik.

InstaRem, a digital international payment service company, addresses these pain points and has managed to keep its costs very low. For one thing, its exclusively online service does not need to utilise middlemen — a key feature of the offline international MTO industry.

Foreign exchange rates tend to be quite unfavourable to customers, with many remittance service providers adding margins on top of the established exchange rate. Further exacerbating this problem is a lack of currency options. InstaRem circumvents this problem in two ways. Firstly, Pratik explains, the company is licensed to operate in eight different jurisdictions, with two more to be added soon. “That makes us among the most licensed entities in the market,” he says, and enables the company to facilitate payments to more than 60 countries worldwide.

InstaRem is licensed to operate in Australia, Singapore, Hong Kong, Malaysia, the US, Europe (the company’s licence allows it to operate out of a further 34 European countries), India and Canada. “We are approved by the regulating authorities in these jurisdictions, and that in itself is an endorsement of how we run the business,” says Pratik.

“With the ability to have direct relationships in these countries, coupled with our specialisation in Asia, including all the tougher currencies, this means we have the ability to be on a single switch for all countries. This has ensured predictability and speed of payments, as well as consistently low costs.”

In addition to the popular international currencies, InstaRem’s Asia emphasis gives it access to other regional currencies such as the Vietnamese dong, Indonesian rupiah, Sri Lankan rupee, Nepalese rupee, Philippine peso, and the Bangladeshi taka.

In addition to the wide selection of currencies, the company — founded in 2014 and headquartered in Singapore — also utilises a live foreign exchange rate with no added margine. Instead, a very small fee of 0.6% is charged on each transaction, much lower than the 10.4% average stated in the World Bank report.

Customers in Malaysia will be able to make international money transfers to over 60 countries, using live mid-market foreign exchange rates. According to InstaRem, these exchange rates are no different from those that appear on Reuters newswire services.

InstaRem has successfully carved out any hidden charges among its partner banks. “Our deal with our partner banks is that InstaRem is the only point at which there will be any cost deductions, and these will be readily transparent on the portal before the transaction takes place.”

Prospective users must first register their personal details on InstaRem’s website, along with their bank details. After receiving a one-time password via mobile phone and keying in the password, users will then have to upload official proof of identification.

At this point, they will have to schedule a face-to-face meeting with InstaRem personnel to verify the authenticity of the details provided. For now, the company does not have approval from Bank Negara Malaysia to conduct “e-Know Your Customer” (e-KYC) protocols, and conducts them manually.

“At present, we’re conducting face-to-face KYC protocols. So, users can register for a particular time slot, at which point they may come to our office, or our personnel can go out to meet them at a place of their choosing.”

Pratik explains that InstaRem did not apply for entry to Bank Negara’s fintech regulatory sandbox, which would have allowed the company to run e-KYC protocols without needing express approval from the central bank.

“We had earlier already applied for and acquired a money service business licence from the authorities. Since the e-KYC regulations have now been released, we are looking to submit our application to Bank Negara in the next couple of weeks,” he explains.

“We expect the process to be reasonable, since players like us have international e-KYC experience. As for our application, the processes will meet the policy requirements as set out by the central bank. The idea is to put controls in place such that there is efficiency without compromising the levels of security that we get with face-to-face KYCs.”

Once validation is complete, users will then be able to start transferring funds. They will need to fill in their transfer details, such as the amount to remit, together with the preferred outgoing and incoming currencies. They then have to key in the details of the recipient, along with the mode of transfer. To this end, users can choose between a direct bank transfer or a financial process exchange (FPX) payment — a separate and secure online payment gateway that allows users to make real-time online payments from their existing current or savings account. According to InstaRem, this option tends to be quicker. Having said that, however, Pratik says all transactions typically clear within one or two business days.

Users will then be able to review their transaction before confirming the transfer. At this juncture, InstaRem provides users with the outgoing and incoming amounts, including a breakdown of all the charges involved, as well as an estimated time for the amount to clear on the recipient’s end.