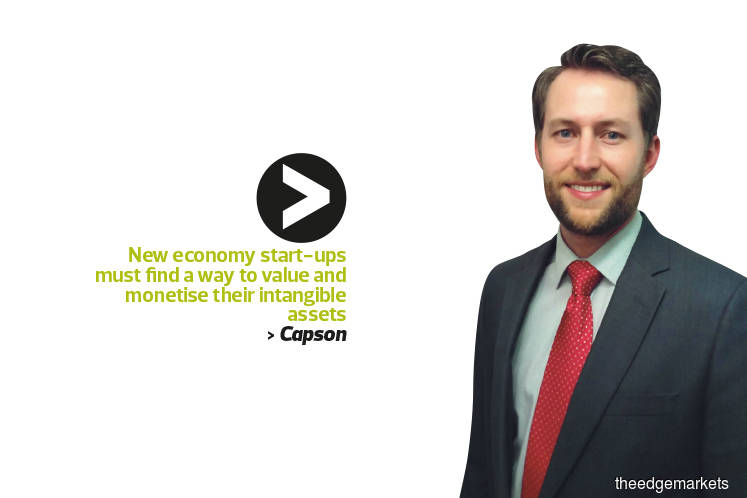 When you think about the new generation of high-profile companies, such as ride-sharing service Uber, social media network Facebook and accommodation-sharing platform Airbnb, one thing stands out — these companies do not hold a lot of physical assets.

Uber, for instance, does not own vehicles. The same goes for Facebook, which does not own content. This is a far cry from companies of the past, whose bricks-and-mortar stores or physical products formed a core part of their assets. Instead, these new-generation companies boast a wealth of intangible assets such as the data of its users or unique pieces of code.

However, many say that accounting standards have not evolved in tandem with businesses. Thus, the value of intangible assets — such as intellectual property (IP) or databases — are not captured on the balance sheet.

This results in a divergence between the value of a company as reflected on the balance sheet and the actual value of the company, says Tyler Capson, managing director for Asia at EverEdge Global Ltd, an intangible asset valuation, advisory, risk and transaction specialist.

“Companies such as Google, Amazon and Yahoo! have thousands of data points on their buyers or users of their platforms. But most of that is not reflected in their balance sheets. That is apparent when you see their book value compared with how they are trading in the stock market or the price at which they are sold to another company. There is a significant difference between those numbers,” he says.

Companies such as Dropbox, Alibaba and Airbnb have been raising funds at valuations that are more than 10 times their revenue. Although there could be an element of hype in these cases, the rise of these companies also illustrate the importance of intangible assets in the new digital economy.

Properly quantifying intangible assets could make a huge difference for companies hoping to raise funds or undergo mergers or acquisitions. Additionally, companies with new business models and few physical assets — a furniture subscription service, for instance — could gain recognition from the market. Venture capital investors can also benefit from doing due diligence on the intangible assets of these new-economy start-ups.

Capson cites one of his clients, a Malaysian start-up that produces air conditioners, as an example. The company developed a technology that can produce energy-saving air conditioners.

“It spent US$5 million [for example] to develop this as part of its R&D. Now, it has a factory to produce these air conditioners. But because the company was built from scratch and bootstrapped, its value on the balance sheet is very low. It expensed the R&D out. And it does not have many fixed assets or much goodwill,” he says.

Now, let’s say a company from Singapore is interested in acquiring this company for US$5 million. “On the start-up’s balance sheet, it does not have US$5 million in assets because it spent the money on R&D and expensed it. Meanwhile, the second company spent the same amount of money to acquire this asset on its balance sheet and it is recorded as a US$5 million asset,” Capson illustrates.

On paper, it would seem as if the Singaporean company were more valuable because it had a US$5 million asset following the acquisition. But in fact, the Malaysian start-up was worth as much or more. It just was not reflected on paper, as it would be for companies that grow via acquisitions. In this case, the Malaysian start-up could benefit from quantifying and recording its intangible assets.

“What moved the needle was the identification of the intangible assets, the explanation of their value and how these could extract more value from the deal. Had the deal just been based on a financial valuation, the company probably would not have gone into the details and looked at the quality of the assets,” he says.

Valuing intangible assets could also help companies gain a competitive advantage, especially for those in countries like Malaysia, which want to move from a production-based economy to a knowledge-based one. In the latter, companies draw significant value from its workers’ knowledge and intellectual capital. To achieve that, IP must be well protected.

“In terms of the protection of legal rights such as patents, trademarks or copyrights, there is less enforcement in countries like Indonesia, Malaysia and China than there is in the US or the UK,” says Capson.

The loss of IP through theft, undefined ownership or brand infringement can result in significant financial losses.

Once companies identify and protect their IP, they can also earn additional revenue from licensing it. Capson cites another of his clients, a prestigious winery in New Zealand, as an example.

The company has a list of buyers for its wines, he says. “The company has been offered hundreds and thousands of dollars by competitors and other companies to utilise that list to market to that specific group of people. These people can use the list but the winery still owns it as it is merely licensing it out.”

The company realised that its database of high-net-worth individuals had become a significant asset over time.

Why the lag in recognising intangible assets?

Using the example of the winery, under the common accounting standards, the company would expense the cost of making the list — thousands of dollars in marketing and advertising — in its profit and loss statement. It is not recognised as an asset in its balance sheet.

“But is it an asset? Absolutely. Unfortunately, the accounting standards do not allow you to directly attribute value on your balance sheet without you spending to acquire an asset. What happens in this case is that the value of the asset is not recognised until it is sold,” says Capson.

This situation is a result of the accounting standards failing to evolve as fast as the economy. It was developed in an industrial era and it was designed to track physical assets, he points out.

“But we are no longer in an industrial era, where it was hard to accumulate capital and physical assets. Nowadays, capital is cheaper and property, equipment and buildings are no longer critical to running a business. Co-working spaces have exploded over the past 10 years because people are realising that physical assets do not necessarily generate profit the way they used to,” says Capson.

Businesses also face challenges in obtaining loans from financial institutions using IP as collateral. Various governments, including Malaysia’s, have introduced IP financing schemes to invigorate this concept. But it is still not a mainstream practice.

“It is not a new concept. We have seen musicians like David Bowie use his music catalogue as collateral to raise funds. The tricky part is the banking regulations. The category of intangible assets and IP is unfortunately classified in the same group as personal loans or no collateral. This means even if you get your intangible asset valued, most banks still classify it as general personal risk, which is the same as using credit cards,” says Capson.

Companies and governments are aware of this trend and are taking steps to change things. For instance, Capson observes that more companies are doing a full intangible asset valuation during their purchase price allocation process, which occurs when a company purchases another.

“We are seeing a trend where companies minimise the amount of goodwill that they put on their balance sheet because it will be hard to sell later on. They prefer to have it on their balance sheet as a specific asset that is more likely to be sold or divested. So, instead of putting it under goodwill, they categorise each asset — such as customer contracts, client relationships, data sets, trademark and patents, among others,” he says.

Last year, EverEdge was invited by Agensi Inovasi Malaysia and the Business Valuers Association Malaysia to present on this topic and engage with local companies. “Small and medium enterprises should pay attention to this because it is easier to articulate your value to a buyer or potential partner if you have done the process of categorising your intangible assets and measuring them. Doing that from the start is a lot easier than trying to clean it up later on,” says Capson.