Its sugar subsidiary, MSM, posted a 35% year-on-year (y-o-y) decline in the third quarter of financial year 2014 (3QFY14) net profit due to rising competition from cheaper imported refined sugar in the industrial segment of the domestic market.

The group’s first nine months of 2014 core net profit fell 40% y-o-y, as the additional contributions from its newly-acquired assets were insufficient to offset the poorer performance of certain key business divisions.

FGV posted a 3% y-o-y rise in 3QFY14 fresh fruit bunch (FFB) output, which we consider to be below the country’s achievement of 3% increase during the same period. This is because FGV has added around 5% of additional mature oil palm area from the acquisition of Pontian United Plantations Bhd in 4QFY13.

The downstream unit sank into heavier losses in 3Q due to the losses from its refining and Canadian operations.

During its teleconference, management explained that the losses from its commodity contracts were the main reason for its downstream losses.  We gathered that the losses were partly unrealised and may reverse in 4QFY14.

This fails to excite us, as we are concerned about the possible earnings dilution from its recent acquisition of Asian Plantations Ltd.

The loss-making downstream business, poor 3QFY14 results, weaker yield achievement by its estates, possible earnings dilution and weaker balance sheet position after the acquisition of Asian Plantations lead us to downgrade the stock from “hold” to “reduce”. — CIMB Research, Nov 28 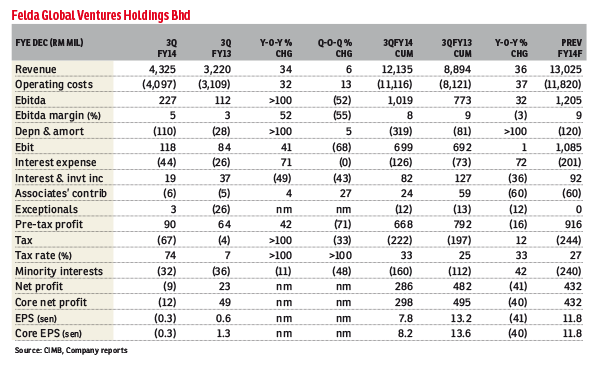