Felda to make mandatory offer for FGV at RM1.30 per share, but keeps mum on listing status 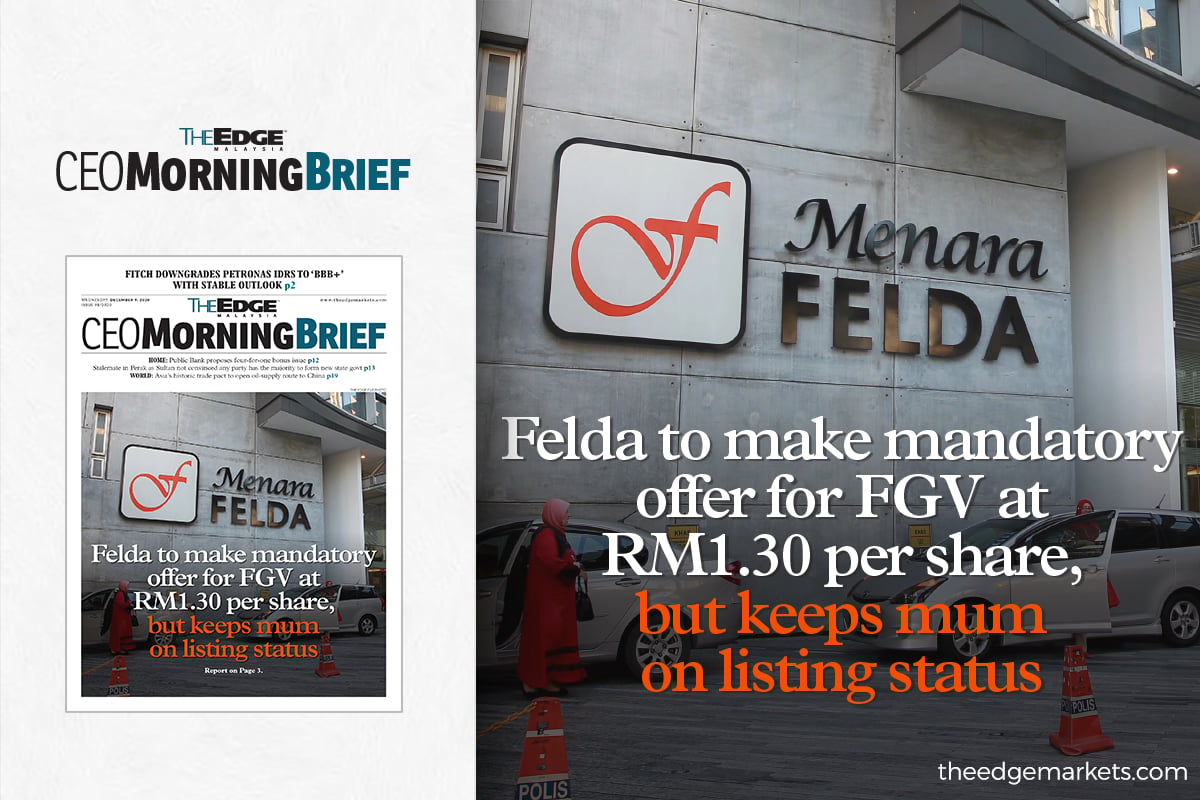 *This story has been updated to correct the introduction and headline*

KUALA LUMPUR (Dec 8): After all the fuss about the Federal Land Development Authority (Felda) having obtained the Cabinet’s approval to terminate its land lease agreement (LLA) with FGV Holdings Bhd, and how it wanted to take over the listed unit’s oil palm mills, there is now a new twist to the plot that adds to the speculation about Felda’s endgame. Felda is planning to make a mandatory takeover offer to FGV’s minority shareholders at RM1.30 per share, should it be able to raise its stake in the listed unit.

On behalf of Felda, which owns a 21.24% stake in FGV, Maybank Investment Bank Bhd announced today that Felda is buying over a 6.1% stake held by Kumpulan Wang Persaraan (Diperbadankan) (KWAP) and a 7.78% interest held by Urusharta Jamaah Sdn Bhd for RM658 million cash. This raises Felda’s stake to 35.12%.

Upon completion of the proposed share acquisition, Felda, together with the parties acting in concert (PACs) with it, will collectively hold more than 50% of FGV shares, Maybank IB said, thus triggering a mandatory takeover offer (MO). It did not name the PACs. Maybank IB said Felda will serve the notice of mandatory offer to FGV's board of directors, once the share purchase agreements turn unconditional.

More importantly, Felda did not reveal whether it intends to maintain FGV's listing status after the takeover. This is essential information for minority shareholders.

When The Edge sought clarification on the matter, Maybank IB replied via a text message: “Please refer to the press notice. We don’t have anything to add beyond the statement.”

Nonetheless, the investment banker has made it clear in the announcement that the mandatory takeover offer will not result in a takeover offer for FGV’s 51%-owned listed subsidiary MSM Malaysia Holdings Bhd.

Interestingly, FGV share price was on a steady climb before the proposed share purchase announcement, rising from RM1.03 on Nov 2 to RM1.27, just prior to the announcement. The offer price marks a premium of 2.36% or three sen from RM1.27. Maybank IB explained that the proposed share purchase is part of Felda's plan to transform and restructure itself and its related companies to strengthen its core business in the plantation sector.

Maybank IB noted that Felda had, on Oct 30, announced that it was embarking on a transformation plan to make Felda financially independent and sustainable, which includes enhancing Felda's core income from its lands. This potentially involved terminating its LLA with FGV and taking over the related palm oil mills, subject to satisfactory discussions with FGV.

"Concurrently, the proposals [on share purchase] were considered, and based on the advice from financial and legal advisers, the proposals represent the most efficient and effective approach for Felda," it said.

To recap, it has been more than one month since the special task-force led by Tan Sri Abdul Wahid Omar, who is also chairman of Bursa Malaysia, announced the termination of the LLA. FGV, however, has yet to receive notice of the LLA termination.

Furthermore, Felda has been tight-lipped about the compensation that FGV will receive as a result of the termination — which is material information for a public-listed company with thousands of minority shareholders, including smallholders who subscribed for its initial public offer at RM4.45 per share in 2012.

Bluntly put, Felda seems to be keeping its card close to its chest for some reasons. However, as its transformation plan involves FGV, compliance with listing requirements on corporate governance and information dissemination should not be taken lightly.