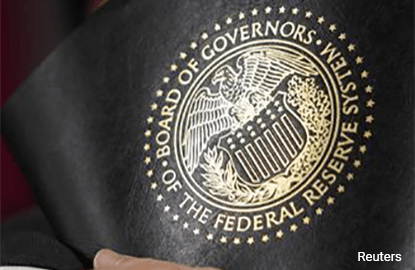 SAN FRANCISCO/NEW YORK (Feb 1): Federal Reserve policymakers are putting markets on notice that the central bank's US$4.5 trillion balance sheet is back on the agenda in an apparent effort to give investors time to prepare for changes rather than to signal any action is imminent.

Policymakers want to minimise any volatility that slimming the Fed's massive balance sheet might cause, and have said they will only do so after interest rate increases are "well underway".

The central bank is expected to keep that line in its statement on Wednesday following this year's initial policy meeting and the first one under Donald Trump's administration.

The Fed amassed the bonds during and after the financial crisis to inject cash into the economy and put downward pressure on long-term rates, and has been keeping its portfolio steady since December 2013.

While the Fed has only raised rates twice since the crisis, a number of Fed policymakers are already voicing support for allowing the debt holdings to shrink by letting bonds mature without reinvesting the proceeds.

Some have argued the process, or at least the debate over how to proceed, should begin later this year. Only a few months ago, several voices from within the Fed suggested the balance sheet could remain big for many years to come.

But with labor markets continuing to tighten and Trump promising tax cuts and more spending, inflation and rates may rise faster than last year. Trimming the balance sheet would be the Fed's next step in normalising monetary policy.

Most Wall Street investors do not expect it until mid-2018, policymakers are playing it safe, keen to avoid a repeat of the 2013 "taper tantrum", when bond yields surged after then-Fed Chair Ben Bernanke hinted at cutting the pace of bond buying.

The Fed is also putting investors on notice in case the slimming "could come up faster if the rate hikes were faster," said Tim Duy, a professor at the University of Oregon.

While giving markets plenty of time, the Fed is also laying out evidence why they do not need to be unduly concerned.

As Fed Chair Janet Yellen pointed out in a speech in January, one reason is that the average maturity of the securities in the Fed's portfolio has declined, while that of the overall Treasury market has increased.

Essentially, that means the Fed's portfolio has become less influential as an anchor for long-term rates than in the past.

In addition, the overall bond market has grown, reducing the relative size and impact of the Fed's holdings.

Bernanke, for one, argues the economy is "growing into" the Fed's expanded portfolio and there is no need to bring it back to pre-crisis levels of around US$800 billion. In fact, several Wall Street banks suggest the Fed only needs to cut its bond holdings by US$1 billion to US$1.5 billion.

One tricky question the Fed will face is what to cut first.

The Fed's US$1.76 trillion mortgage-backed securities holdings account for about a quarter of that market, compared to the Fed's 12% share of the Treasury market. Any marked change in the Fed's MBS ownership could have a greater impact on that market and consequently housing borrowing costs.

On top of that, in contrast to the Fed's US$2.46 trillion of Treasuries which mature according to a set calendar, the pace at which mortgage bonds mature can vary substantially.

It slows down when rates rise and homeowners stick with current loans and accelerates when rates fall and borrowers rush to refinance debt, which increases the technical challenge for the Fed in engineering a wind-down.

Some analyst argue that shrinking the Treasury portfolio would be the least disruptive, given its diminished share of the overall market.

Others, like Morgan Stanley, say the Fed should trim MBS because it wants to return to a Treasuries-only portfolio anyway and its size would cease to be an issue over time.

"The economy should grow into the Fed's Treasury portfolio within about a decade," the bank's analysts wrote in a note on Friday.