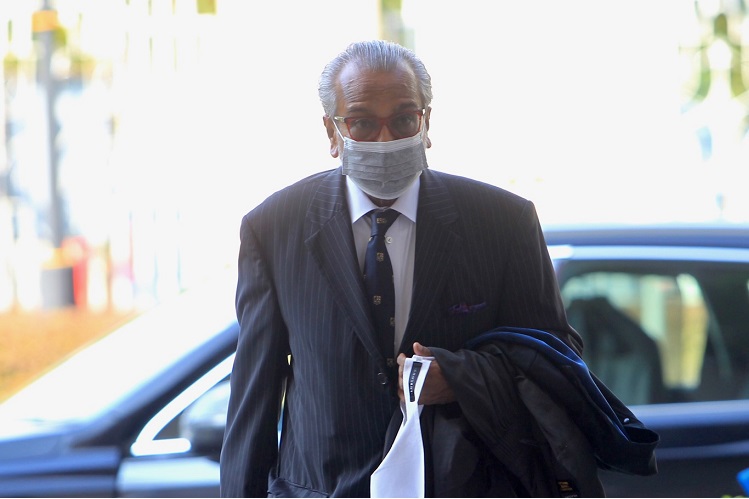 PUTRAJAYA (June 24): Senior lawyer Tan Sri Muhammad Shafee Abdullah's application to expunge an affidavit by a former special officer to the Attorney-General (AG) affirming that he had received the RM9.5 million from former prime minister Datuk Seri Najib Razak will be heard by the Federal Court on July 22.

The date has been fixed following case management at the apex court before registrar Wan Fatimah Zaharah Wan Yussof today.

Initially, the case — where Shafee had named the Malaysian government and PKR president Datuk Seri Anwar Ibrahim as respondents — was fixed for May 20, but it was postponed due to the movement control order which was enforced following the Covid-19 outbreak.

It was reported that the controversial affidavit was filed by Siti Rahayu Mohd Mumazani, a former special officer to the AG, in connection with Anwar’s civil action against the government.

To recap, in his originating summons, Anwar claimed he did not get a fair trial in the appeal against his second sodomy conviction after Najib paid Shafee to lead the prosecution team in the case at the Court of Appeal and Federal Court.

In Siti Rahayu’s affidavit, she claimed that new information was discovered, revealing that the sum was paid to Shafee from Najib's bank accounts between 2013 and 2014.

On Nov 29, 2018, the Court of Appeal dismissed Shafee's application to expunge Siti Rahayu's affidavit and to cross-examine her.

The court had, however, allowed Shafee to intervene in Anwar's appeal regarding the latter’s civil action against the government over his sodomy conviction.

Besides this, the senior lawyer is also facing charges for money laundering and tax evasion with regard to the RM9.5 million, which had allegedly come from 1Malaysia Development Bhd (1MDB).

Meanwhile, Damansara MP Tony Pua's bid to obtain leave from the Federal Court to appeal against the appellate court's decision last year to uphold the withdrawal of Najib's defamation suit against him has also been fixed on the same day.

Last Oct 15, a three-member Court of Appeal bench led by Justice Datuk Hamid Sultan Abu Backer removed the interim injunction imposed on Pua by the same court after hearing his full appeal, but upheld the withdrawal of Najib's suit by the High Court in 2018 after Barisan Nasional lost the 14th general election.

Najib, who is also the Pekan MP, filed the suit in his personal capacity against Pua in April 2017.

In the suit, the former premier alleged Pua made defamatory statements against him via a Facebook live video on the tabling of the amendment to the Syariah Courts (Criminal Jurisdiction) Act 1965 — which is also referred to as Act 355 — by PAS, and connected it with 1MDB.

Najib claimed the video clip was uploaded by Pua or his agents on Facebook with the title, 'BN govt abandons all bills to give precedence to the PAS-led private members Act 355', and that it could be accessed widely and freely on the Internet.

Following the suit, the Kuala Lumpur High Court had on Aug 4, 2017, granted Najib an injunction to prevent Pua from continuing to make similar statements and air the video clip.

On Feb 14, 2018, Pua failed in his appeal to lift the injunction at the Court of Appeal, prompting him to file for leave to appeal the matter at the Federal Court.

In the judgment by the appellate court at the time, Justice Datuk Yaacob Md Sam wrote that the court must take judicial notice that Najib had then been cleared of wrongdoing in relation to 1MDB by former Attorney-General Tan Sri Mohamed Apandi Ali.

On June 20, 2018, the Federal Court granted Pua leave to appeal against the injunction and the decision by Justice Yaacob.

Najib, however, was allowed to withdraw his suit by High Court judge Datuk Mohd Zaki Abdul Wahab on July 30, 2018.

This, coupled with the appellate court decision last Oct 15, resulted in this present appeal by Pua, who is also the DAP national publicity secretary.