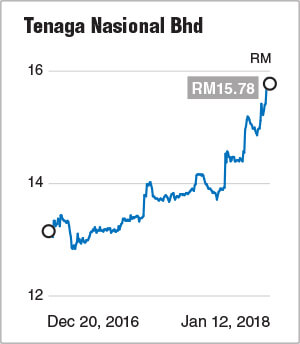 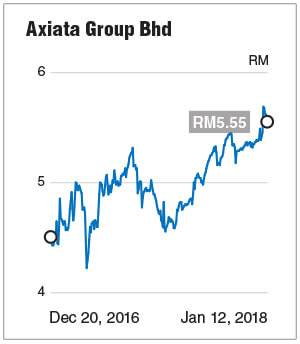 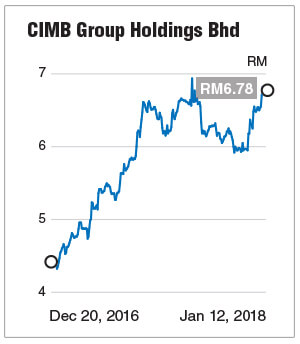 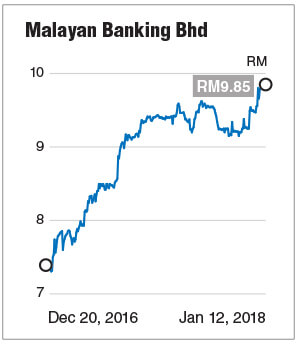 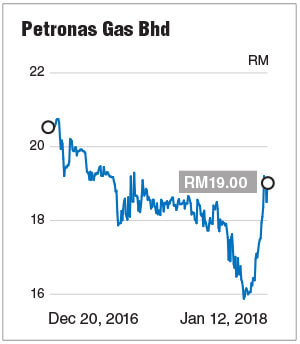 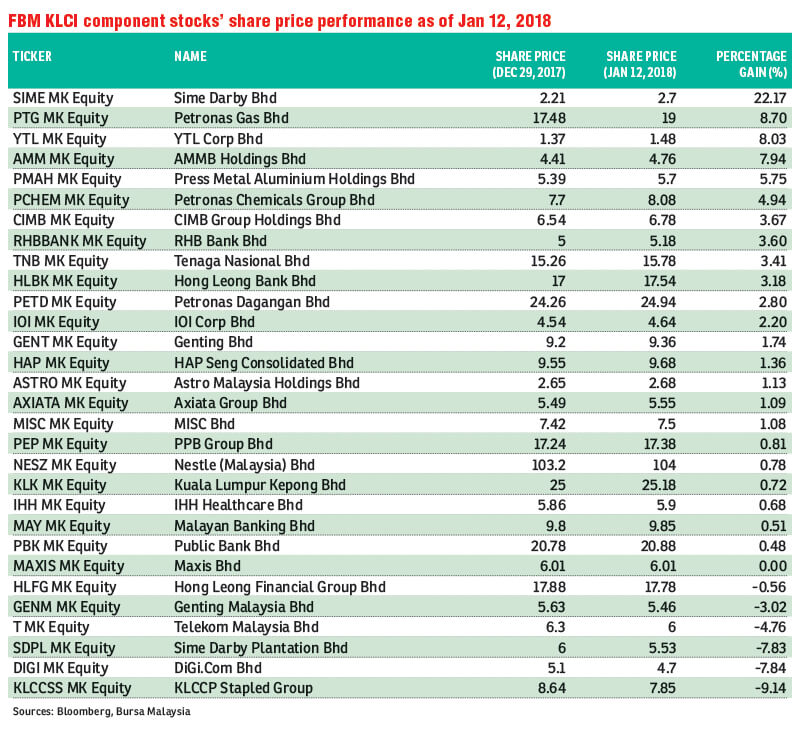 KUALA LUMPUR: The stock market frenzy around the world including Malaysia since the start of the year has caught many off guard. The excitement is set to continue for Bursa Malaysia ahead of the 14th general election (GE14), with the local market showing first signs of the much-anticipated pre-election rally since Jan 3.

“The market has been on a strong upward trend amid the recovering ringgit and stronger oil price. Talk of a pre-election rally has resurfaced among investors, as well as in the media. While we see some profit-taking activities as we approach the end of our second week of trading, we believe the weakness in the market presents a good buying opportunity for investors and traders,” Rakuten Trade Sdn Bhd head of research Kenny Yee told The Edge Financial Daily.

“We think that the high spirits leading to the elections, as well as the euphoria in the stock market seen in the developed markets will fuel the momentum in the domestic stock market,” he added.

Echoing the same sentiment, TA Securities research head Kaladher Govindan is of the view that the strong run in the benchmark index so far this year is in line with expectations.

“It was within our expectations if you follow our strategy reports. We expect the FBM KLCI to hit 1,890 points in the first half of 2018 (1H18), especially in the first quarter before retreating in 2H18,” Kaladher said via email.

In its annual strategy report published on Dec 8 last year, TA Securities wrote that expectations of a GE14 rally should propel the FBM KLCI higher in 1H18, premised on the assumption the elections will be held in March or April this year. However, Kaladher highlighted a possible correction in the market in 1H18.

“A Barisan Nasional victory could hold up on the market momentarily, but we reckon the FBM KLCI could be due for a correction in 2H18 as concerns over the US monetary tightening and ringgit weakness reverberate across the market and translate into heavy foreign selling and a risk-averse strategy among investors,” he added.

However, Kaladher noted that the downside pressure can emerge sooner in 1H18 if the current ruling coalition’s power base crumbles after the elections.

Affin Hwang Asset Management is also optimistic about a better year in 2018 and expects the FBM KLCI to see a 6% to 8% upside, tracking market earnings growth.

“Analysts are starting the year with a projection of 9% to 10% [growth]. The expectation is that the stronger ringgit will lead to margin expansion [as opposed to contraction] for domestic-oriented companies,” its senior associate director of equities Cheryl Pola said.

The FBM KLCI has climbed 8.6% over the past year. However, CIMB Investment Bank head of Malaysia research Ivy Ng believes the market still has legs to run, maintaining an end-2018 FBM KLCI target of 1,880 points.

Taking a look at the 30 constituents of the FBM KLCI, the best-performing stock so far is Sime Darby Bhd. The counter climbed 22.2% year to date (YTD) to close at RM2.70 last Friday. This was followed by Petronas Gas Bhd and YTL Corp Bhd, with gains of 8.7% and 8% respectively.

Six of the FBM KLCI component stocks were on a downtrend, with KLCCP Stapled Group emerging as the worst performer YTD, falling 9.1% to close unchanged at RM7.85 last Friday.

Apart from Axiata Group Bhd, the telecommunication sector has turned out to be a laggard YTD, with shares in DiGi.Com Bhd and Telekom Malaysia Bhd declining by 7.8% and 4.8% respectively. Maxis Bhd remained unchanged at RM6.01 last Friday.

Despite a strong start to the year, the FBM KLCI is still underperforming its regional peers and developed markets. The Edge Financial Daily has spoken to several heads of research on some of the potential stocks they see among the component stocks that could run higher on the back of the positive sentiment in the global equity market, recovering oil prices and the ringgit, as well as the boost from the upcoming GE14.

A screaming buy among analysts, Tenaga Nasional Bhd (TNB) rose 3.4% in the first two weeks of the year. Most analysts continue to favour TNB as Bloomberg data shows that 20 out of 25 analysts that cover the stock have a “buy” call.

According to Rakuten Trade’s Yee, the utility company’s valuation is undemanding and provides decent dividend yield. At its closing price of RM15.78 last Friday, TNB is trading at a trailing price-earnings ratio (PER) of 12.9 times and has a dividend yield of about 3.9%.

TNB is also CIMB’s top three big caps for 2018 as Ng sees the stock offer a resilient organic earnings growth potential. According to her, it is building four new power plants in Malaysia, which could raise its generation earnings in 2017 to 2020.

She also pointed out that stronger earnings driven by the new assets TNB acquired in the past year are another potential rerating catalyst.

TA Securities, which has a target price (TP) of RM17.38 for TNB, indicating a potential return of about 10%, has also picked the utility company as one of its top picks.

TA Securities analyst Kylie Chan Sze Zan said in an annual strategy report that TNB is attractive on most valuation metrics, including a 10.9 times forward PER, which is one standard deviation below historical average, 7.1 times forward enterprise value-to-earnings before interest, taxes, depreciation and amortisation, which is an 18% discount to regional peers.

Based on Bloomberg’s consensus data, the 12-month TP for TNB is at RM16.61, indicating a potential return of 5.3%. TNB was also one of the stocks that featured on The Edge Financial Daily’s Top 10 Picks for 2018.

Axiata Group Bhd is expected to perform in 2018 as the telecommunication company is expected to see an improvement in its earnings after witnessing four consecutive years of earnings contraction at its operating companies — Celcom Axiata Bhd and Indonesia’s PT XL Axiata Tbk.

The turnaround appears to be expected by the market as seen by the gain of 1.1% in the first 10 trading days of 2018. This was in contrast to its share price performance in the last three years where it fell by about 14.6%.

According to CIMB’s Ng, Axiata’s core earnings per share is expected to rebound by a strong 29% and 50% for its forecast for financial years ending Dec 31, 2018 and 2019 respectively due to much higher contributions from XL, net profit break-even for Airtel Bangladesh Ltd by end-2018 and cessation in equity accounting for Idea’s losses post-merger with Vodafone.

Rakuten’s Yee concurred, noting that Axiata’s digital transformation is expected to bring an improvement to its earnings.

“Other than that, the news flow of a potential initial public offering of its tower unit, edotco Group Sdn Bhd, this year is also another catalyst for Axiata,” he said.

Affin Hwang Asset Management’s Pola is of the view that banks are among those that could do well in 2018.

“This year has been about improvement in asset quality. In 2018, we should see stronger pre-provision growth, especially if interest rates rise, which will lead to net interest margin expansion [but to a lesser extent compared to its Singapore counterparts],” she said.

She added that loan growth should be slightly stronger after the disappointing 2017.

Pola, however, noted that there is still an overhang on the sector as the impact of Malaysian Financial Reporting Standards 9 (MFRS9) has yet to be fully known but if the impact on provisions or book values is low as expected, it would clear another uncertainty that remains for the banking sector.

Similar to Pola, Rakuten’s Yee highlighted that both CIMB and Maybank could be proxy for foreign buying into the banking sector.

“Maybank is also a defensive play with its relatively high dividend yield of over 5%,” he added.

TA Securities also picked CIMB as one of its top picks for 2018 in its annual strategy report. Its analyst Wong Li Hsia said CIMB has been outpacing its peers in terms of yearly profit growth since the fourth quarter ended Dec 31, 2015.

She also pointed that better prospects in CIMB Niaga and CIMB Thai as one of the investment themes that will drive CIMB.

“Credit charges have eased. While we forecast the overall credit charge to remain elevated, we believe the worst — in terms of asset quality may be over, led by further recoveries in its overseas operations,” Wong said.

The selldown at the end of last year created a value proportion for those who are interested in investing in Petronas Gas Bhd (PetGas).

Yee believes that the selldown was overdone and was mainly due to third-party access framework concern.

While the market has recovered by 19.6% from its low since then, PetGas is still trading at about 4.9% below its three-year average price of RM19.93.