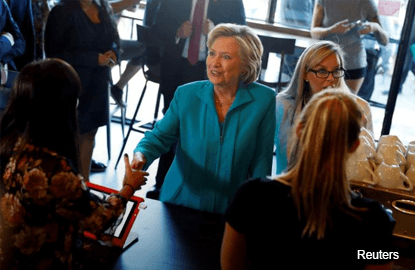 The warrant will allow the Federal Bureau of Investigation to examine the emails to see if they are relevant to its probe of the private email server used for government work by Clinton, the Democratic presidential nominee, while she was secretary of state from 2009 to 2013.

FBI officials were unavailable for comment on the status of their investigation. Reuters could not independently confirm that the search warrant had been issued.

Comey came under heavy pressure from Democrats on Sunday to quickly provide details of the emails, as Clinton allies worried the prolonged controversy could extend beyond the Nov. 8 election and cast a shadow over a Clinton transition if she wins the White House.

Comey's disclosure of the email discovery in a letter to Congress on Friday plunged the final days of the White House race between Clinton and Republican Donald Trump into turmoil. Clinton had opened a recent lead over Trump in national polls, but it had been narrowing even before the email controversy resurfaced.

U.S. Senate Democratic leader Harry Reid sent a letter to Comey on Sunday suggesting he violated the Hatch Act, which bars the use of a federal government position to influence an election.

"Through your partisan actions, you may have broken the law," Reid, a senator from Nevada, said in the letter to Comey.

Clinton campaign chairman John Podesta and campaign manager Robby Mook questioned Comey's decision to send a letter notifying Congress of the email review before he even knew whether they were significant or relevant.

Comey's letter was "long on innuendo, short on facts," Podesta said on CNN's "State of the Union" program, and accused the FBI chief of breaking precedent by disclosing aspects of an investigation so close to the election.

"We are calling on Mr. Comey to come forward and explain what's at issue here," Podesta said, adding the significance of the emails was unclear.

"He might have taken the first step of actually having looked at them before he did this in the middle of a presidential campaign, so close to the voting," Podesta said.

Comey's letter was sent over the objections of Justice Department officials. But those officials did not try to stop the FBI from getting the warrant, a source familiar with the decision said, because they are interested in the FBI moving quickly on the probe.

Sources close to the investigation have said the latest emails were discovered as part of a separate probe of former Democratic U.S. Representative Anthony Weiner, the estranged husband of Clinton aide Huma Abedin.

Weiner is the target of an FBI investigation into illicit text messages he is alleged to have sent to a 15-year-old girl in North Carolina. The FBI already had a warrant to search Weiner's laptop in that probe, but needed a warrant to look at the material that might be related to Clinton.

Sources familiar with the matter said FBI agents working on the Weiner investigation saw material on a laptop belonging to Weiner that led them to believe it might be relevant to the investigation of Clinton's email practices.

Trump has highlighted the issue as proof for his argument that Clinton is corrupt and untrustworthy.

"We have one ultimate check on Hillary's corruption and that is the power of the vote," Trump told a rally in Las Vegas on Sunday. "The only way to beat the corruption is to show up and vote by the tens of millions."

Comey, who announced in July that the FBI's long investigation of Clinton's emails was ending without any charges, said in his letter the agency would review the newly surfaced emails to determine their relevance to the investigation of her handling of classified information.

Richard Painter, a professor at the University of Minnesota Law School and the chief White House ethics lawyer from 2005 to 2007, said he filed a complaint over Comey's actions with the Office of Special Counsel, which investigates Hatch Act violations.

"We cannot allow F.B.I. or Justice Department officials to unnecessarily publicize pending investigations concerning candidates of either party while an election is underway. That is an abuse of power," he said in a column in the New York Times.

But Daniel Richman, a former federal prosecutor who now teaches at Columbia Law School, called the allegations that Comey improperly tried to influence the election "inane."

"Comey's critics cannot show his letter violated the Hatch Act unless they can prove that the FBI director was intending to influence the election rather than inform Congress, which was Comey's stated aim," said Richman, who said he had advised Comey on law enforcement policy but not this issue.

An ABC News/Washington Post poll released on Sunday showed Clinton with a statistically insignificant 1-point national lead on Trump. About a third of likely voters in the poll said they were less likely to back Clinton given Comey's disclosure.

Clinton, who told a Florida rally on Saturday that Comey's letter was "deeply troubling," did not address the issue directly on Sunday but referred vaguely to voters overcoming a "distraction."

"There's a lot of noise and distraction but it really comes down to the kind of future we want and who can get us there," she told a packed gay nightclub in Wilton Manors, Florida, where hundreds of supporters who could not get in lined the streets outside.

"We don't want a president who would appoint Supreme Court justices to overturn marriage equality," she said. - Reuters