THE slump in the oil and gas (O&G) industry has burnt a hole in many pockets, but depressed valuations could create some buying opportunities for investors who are willing to take a longer view.

However, not all O&G counters are created equal. Investors will have to be careful not to catch a falling knife given concerns that oil prices might drop further, even to US$35 per barrel as some fear.

One counter that has set itself apart from the rest is Favelle Favco Bhd (fundamental: 1.7; valuation: 2.4). The group manufactures cranes for offshore rigs in the O&G sector, making it a good proxy for the industry without having its earnings directly affected by the day-to-day fluctuations in oil prices.

As almost 90% of the group’s order book is made up of O&G-related projects, its share price fell 28% from a high of RM3.79 in April last year to close at RM2.73 last Thursday.

However, unlike other O&G counters, Favelle Favco boasts a strong balance sheet with a net cash balance of RM36 million, which works out to about 16.5 sen per share, and a record order book of RM1.09 billion.

While this ensures the group’s FY2015 earnings should remain intact, replenishing the order book will be its main challenge. With the falling oil prices, investment into new O&G projects has ground to a halt, resulting in an oversupply of rigs. Without new rigs, there will not be demand for Favelle Favco’s cranes.

The surge in demand for rigs had been key to Favelle Favco’s earnings growth since 2013. Recall that the group’s order book grew from RM633.7 million in February 2013 to RM1.09 billion in November last year. It is also why O&G-related jobs comprise 90% of the group’s order book, up from about 60% previously.

“For now, Favelle Favco isn’t very exciting. It gets most of its jobs from the O&G sector, about 70%, and the slowdown means less jobs for the company. However, it does have a large order book, and management has indicated that the company is in cruise control for now,” says an RHB Research Institute analyst.

Favelle Favco also specialises in building high-rise cranes for the construction industry. Although the sector isn’t in full swing either, it will be a source of jobs for the group while the O&G sector consolidates. Potential jobs in the pipeline include the KL118 tower that Permodalan Nasional Bhd is building near Stadium Merdeka.

The group has been making headway into China, setting up operations to cater for the Chinese market. It is understood that competition there is fierce, but globally, the country remains the most robust when it comes to construction activity.

“However, Favelle Favco still has exposure to construction and wind turbines. It is continuing to see demand for its cranes for ships and shipyards in China. There has been a surge in shipbuilding activity in China of late as speculators expect a rebound in shipping. Some of these ships need cranes and Favelle Favco supplies them. There is also demand for such cranes in Singapore and South Korea,” says the analyst.

The analyst adds that news flow tends to be slow on the group as it does not have to announce contracts that are not substantial — less than RM20 million to RM30 million. Furthermore, its net profit margins are quite thin, ranging from 4% to 10%.

“Oil and gas cranes offer the highest margins. But there will be less demand as offshore rig utilisation continues to slow down,” says the analyst.

Note that Favelle Favco is shielded from the impact of the weakening ringgit as it collects its revenue in US dollar, whereas most of its costs are in ringgit.

On top of that, the company pays a regular dividend with a 40% payout ratio. In fact, fund managers are said to hold this stock for its dividend.

That said, investors looking at Favelle Favco should anticipate a moderation in earnings growth and value the company accordingly. With its net cash position, the company should have no trouble riding out the downturn in the O&G industry. The group may even be able to take on some acquisitions over the next few years, absorbing any competitor that may run into trouble.

Looking ahead, the company’s strong order book should support earnings growth in 2015 and into early 2016. The main downside risk for Favelle Favco would be a prolonged depression in oil prices.

Investors should note that Favelle Favco’s shares have relatively low liquidity, with an average 221,000 shares traded daily in 2014. The group is 60% controlled by Muhibbah Engineering (M) Bhd, which is in turn 21% held by executive director Mac Ngan Boon. 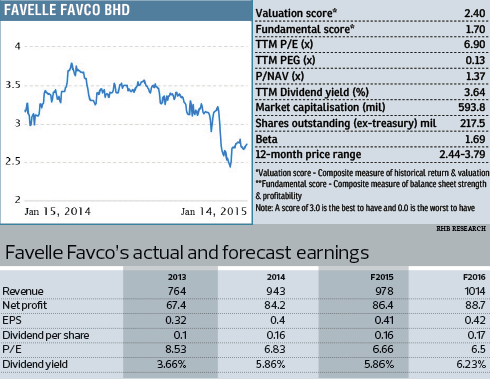 Note: The Edge Research’s fundamental score reflects a company’s profitability and balance sheet strength, calculated based on historical numbers. The valuation score determines if a stock is attractively valued or not, also based on historical numbers. A score of 3 suggests strong fundamentals and attractive valuations. Go to www.theedgemarkets.com for more details on a company’s financial dashboard.