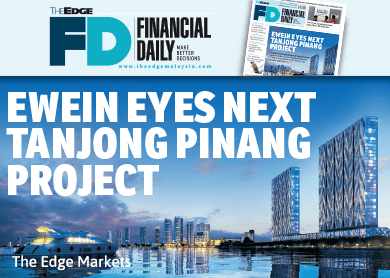 KUALA LUMPUR: Ewein Bhd, which is developing its first property project valued at RM800 million at Bandar Tanjong Pinang, Penang in a joint venture (JV) with Consortium Zenith BUCG Sdn Bhd (CZBUCG), is looking to bag the next parcel of land the latter will be offering for development there.

It expects the next project to be up for grabs in the second half of this year.

“We are now working closely with CZBUCG to explore the potential [development] of the next parcel of land measuring 4.29 acres (1.73ha). It will also require the approval of the Penang Island City Council on the planning permission for the proposed development,” Ewein managing director Datuk Ewe Swee Kheng told The Edge Financial Daily in an interview last week.

He declined to reveal the details, but that it is likely to be another high-rise residential development.

It is understood that the second project will have a gross development value (GDV) of RM1 billion.

Ewe said the sea-fronting serviced apartments will be priced from RM1,200 per sq ft, which is relatively lower than Eastern & Oriental Bhd’s high-end condominiums at Seri Tanjung Pinang nearby which are going for RM1,800 per sq ft.

Ewe pointed out that while Ewein Zenith was chosen to develop the City of Dreams project, it is not guaranteed that it will be the chosen developer to undertake the remaining parcels of land in Bandar Tanjong Pinang.

“Of course, we (Ewein) have high hopes of being chosen because of our current relationship with CZBUCG. That’s why we must ensure that our first project (City of Dreams) is successful. If we do the project well, there is no reason why the relationship cannot continue,” he said.

Bandar Tanjong Pinang entails 110 acres of reclaimed land in Tanjung Pinang that was given to CZBUCG by the Penang state government as compensation-in-kind for the building of the RM6.3 billion Penang Undersea Tunnel, which includes three road bypasses.

Lee said Bandar Tanjong Pinang is estimated to have a GDV of RM25 billion over the next 10 years.

According to Ewe, Bandar Tanjong Pinang will comprise a combination of residential and commercial properties, but the proportion will depend on prevailing property market conditions.

“We have a masterplan [for Bandar Tanjong Pinang], but it is subject to change according to market conditions,” he added.

Ewein, which is diversifying its revenue stream from manufacturing of precision sheet metal fabricated parts to include property development, expects moderate growth for the current financial year ending Dec 31, 2015 (FY15) as the sluggish demand from the electronics and electrical sector continues.

The group saw net profit for FY14 grow 110.3% to RM3.46 million from RM1.65 million in FY13 on higher contribution from its investment holding activities.

However, revenue fell 14.2% to RM44.63 million from RM51.99 million due to a slowdown in orders caused by lower demand for home appliances electronics.

Ewein Zenith will launch the City Of Dreams project in the middle of this year, with construction work to begin in the second half and completion within 48 months.

“We expect revenue contribution from the property development segment to outpace all other segments from FY16,” said Ewe.

He sees Ewein Zenith reaping RM200 million in gross profit from the City Of Dreams project over four years starting from 2016.

“The land cost [for the 3.67-acre parcel] was RM133 million, while the total development cost is estimated to be more than RM400 million,” he said.

Ewe is a substantial shareholder of Ewein, with a 43.05% stake.