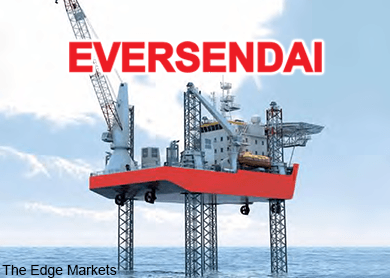 KUALA LUMPUR (June 29): Eversendai Corp Bhd has bagged contracts worth RM250 million in Malaysia, India and the United Arab Emirates (UAE), surpassing the RM1 billion mark for new projects secured in the first half of 2015.

In a statement today, Eversendai (fundamental: 0.85; valuation: 2) said it has secured a contract for the the installation of structural steel, metal deck and shear studs, as well as connection design, detailing and temporary engineering for the Dhirumbai Ambani International Convention and Exhibition Centre in India.

This is the second contract secured by Eversendai for this project, after being awarded the fabrication contract worth RM184 million in January 2015.

Eversendai was also awarded the contract to build a high-end residential project located on an acre of land in Worli, Mumbai, with scope of work for this sea-facing property including core and shell, finishing, mechanical, electrical and plumbing as well as external development works. It is targeted for completion in February 2017.

Eversendai also clinched a contract for the connection design, fabrication, metal decking, supply, erection and fireproofing of steel works contract for a theme park in the UAE.

It has also clinched a fabrication contract of skid shoes for Umm Lulu Gas Treatment Platform in Abu Dhabi, with a total weight of over 1,200 tonnes, with scope of work for this Abu Dhabi Marine Operating Company (ADMA-OPCO) project expected to be completed in August 2015.

On the local front, Eversendai has secured a package for the Pengerang Co-Generation Plant contract at the Refinery and Petrochemicals Integrated Development (Rapid) Complex in Pengerang, Johor.

The scope of work for the project involves erection of structural steel works, and is expected to be completed in December 2016.

Eversendai said it has also secured a contract for a plant extension project in Taiping, Perak.

Eversendai group managing director and executive chairman Tan Sri A. K. Nathan said the group anticipates winning more contracts from its current tender book of over RM23 billion and will continue to aggressively pursuit a substantial number of commercial and infrastructure projects in the Middle East, India and Malaysia.

“We have had a very positive outlook for the first half of 2015 by securing projects worth over RM1 billion,” he said.

“It has always been our commitment to grow our business regionally and globally and necessary strategies are being undertaken, including the expansion of our fabrication facility in Sharjah to accommodate the contracts that we have already secured as well as those in the pipeline,” he added.

Nathan said the group is also bidding for over RM11 billion worth of oil and gas contracts in Malaysia and the Middle East.

"The construction of our sixth plant in Ras Al Khaimah (the UAE) is progressing well and is expected to be completed by October 2015,” he said, adding that the project will help the group intensify its progression into the upstream market.