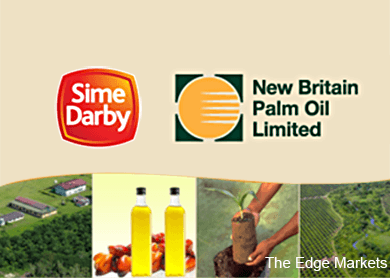 Sime Darby (fundamental: 1.3; valuation: 1.3) said in a filing with Bursa Malaysia today it had yesterday obtained the clearance on the European Union (EU) merger filing for the privatisation of UK and Papua New Guinea-listed NBPOL.

"The condition on the EU merger filing has now been fulfilled," Sime Darby said. Sime Darby said the NBPOL offer had been extended until March 20 this year.

The European Commission said in a statement on its website that it had approved the NBPOL acquistion under the EU merger regulation.

The regulator said it had approved the exercise as the NBPOL acquisition was not expected to result in competition concerns.

"The proposed acquisition would not raise competition concerns given particularly the parties' geographic complementarity within the EU and the presence of other suppliers of palm oil products," the commission said.

To recap, Sime Darby had in October last year, via its wholly-owned unit Sime Darby Plantation Sdn Bhd proposed to buy the entire stake in NBPOL for GBP7.15 a share or GBP1.07 billion (RM5.62 billion) cash.

However, Sime Darby had extended the offer period as it needed to fulfill several conditions such as obtaining the European Commission's declaration that the offer was compatible with the internal market.

The privatisation of NBPOL will see Sime Darby delisting NBPOL from the UK bourse.
The acquisition of NBPOL includes Kulim (M) Bhd's 48.97% stake in NBPOL.

In December 2014, Kulim shareholders had at the company's extraordinary general meeting approved the NBPOL stake sale to Sime Darby.

This means Sime Darby had then fulfilled the condition of securing at least 51% of NBPOL's voting rights for the take-over offer to materialise.

Today, the European Commission's consent for Sime Darby's NBPOL purchase represented another milestone as the market anticipated that the take-over offer would become unconditional.

Sime Darby shares had advanced 4% so far this year versus the KLCI's 2% rise.