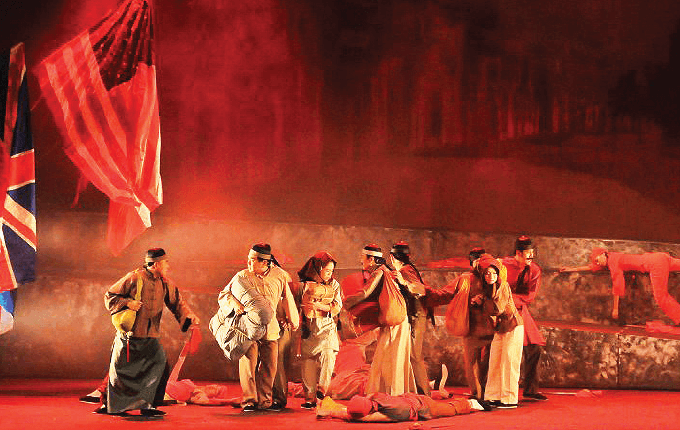 Portrait of an artist and poet on stage

IT is a life story that reads like dramatic fiction, a man who made history with his artistic brilliance and philosophy. In fact, Chinese artist and poet Li Shutong’s life and works have been studied even until today by dedicated students of art.

Now his life is also being sung about in Above Full Moon, a revived musical by Asia Musical Productions (AMP) currently playing in Pentas 1, Kuala Lumpur Performing Arts Centre (KLPac).

“His life is a very interesting one, with lots of ups and downs,” says producer and director Ho Lin Huay, who proceeds to give me a brief historical lesson on Li’s life. She is clearly passionate about the subject. “His life was very dramatic and when you have a story with so many interesting points, it will be bound to be a spectacular show,” adds Ho.

Born in Tianjin in 1888, Li was the son of the fifth wife of a man from a wealthy and prominent banking family. A patriotic young man, he was on his way to take the government exams when the Qing dynasty fell and the country went into chaos. This is where the musical’s story starts, amid the backdrop of a tumultuous period in history.

A master painter, poet, calligrapher, musician, dramatist, philosopher and ultimately a Buddhist monk, Li — who is also popularly known by his monk-name, Hong Yi — went to Japan to study and while there he meets his second wife, Yukiko, who later followed him back home to China.

Chalking many firsts, including the first to use nude models in paintings in China and setting up the first Western style drama club in the country, Li was a determined, albeit rather eccentric, man. “When he was in Japan, he spoke only Japanese and wore only Japanese clothes,” recounts Ho from her research, “When he came back after and became a teacher, he wore the same Chinese style teacher’s garb every day. It was also said, he never spoke a word of Japanese again.”

A man who valued character over artistry, Ho said that Li once closed the door on a higher-ranking Japanese man when the man was only one minute late for their appointment. “I have great admiration and respect Li Shutong because though he was so talented, he chose to live such a simple life at the end,” she continues.

Debuting more than 10 years ago in 2004 at the Putra Indoor Stadium, Bukit Jalil, the musical — penned by Ho herself with music written by long-time collaborator Imee Ooi — recounts Li’s story from age 19 to 63, drawing from selected incidences in his life that Ho felt moved her.

Known for their extravagant productions on a large scale, this current restaging is a more “intimate” production for Ho and AMP. “Of all my productions, this is one that I really wanted to do on a smaller scale, because of the emotions attached to the story,” she says.

“I remember in 2004 when we performed at Stadium Putra, many audience members told me that it would have been nicer in a smaller space, as the distance was too far to be able to feel the emotions of the actor. And since then, that feedback has always been on my mind,” explains Ho.

From the moment the former TV producer was approached to produce the much-lauded Siddharta The Musical in 1999, Ho had the vision to create and tell Asian stories through extravagant musicals.

A strong international response confirmed her vision, “I feel for Asian stories and themes … there are many good stories to be told. Also, I knew from the very beginning that Asian stories also appeal to the international audience,” explains Ho. True enough, the company has performed around the world, including Taipei, Jakarta, Beijing, South Africa and Busan, to name a few. AMP was also the first Malaysian theatre company to take the stage in Esplanade, Singapore, when it opened.

Above Full Moon was Ho’s second musical and first self-funded musical with the help of supporters. Then came the award-winning Princess Wen Cheng and Malaysian-style musical, KITA.

Talking about the story line of Above The Moon, Ho says: I think people like Li who were influential, successful and helped a lot of people are inspirational and their stories should be told,” said the director on choosing biographical characters. However, she was quick to add that the production is still entertainment. “We are not preaching. I want to spread the good message through the show and hope it can give the audience something to think about,” she says.

With a fresh new cast of young actors — the original production starred Yang Wei Han, who has gone on to create his own theatre company, recently producing and starring in Xuan Zang the musical — Ho said the show has a fresh perspective and focus.

“Above Full Moon is one of those productions where it all depends on the actors. Their performance makes or break the show and I believe the current case is very good,” Ho adds.

Above Full Moon is indeed a fulfilling story of a man and it comes to life in a spectacular staging. From Japan’s Sakura trees to the transition from Qing Dynasty to the beginnings of the Republic of China, this production is nothing short of spectacular — from the set, staging and deliverance. 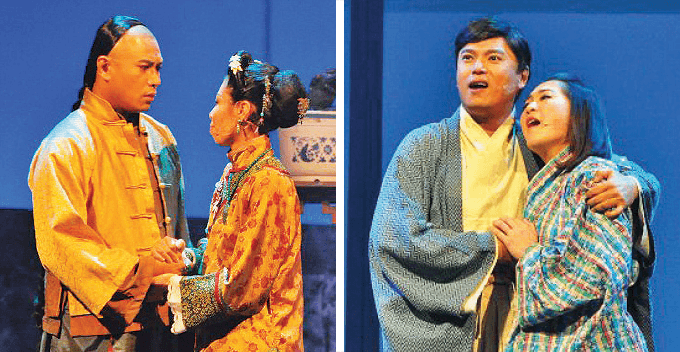 This article first appeared in The Edge Financial Daily, on April 20, 2015.