EKOVEST BHD is looking at monetising some of its highway concession assets — comprising the various phases of the DUKE (Duta-Ulu Klang Expressway) highway project — to fund its property development ventures.

One option, according to management, is spinning off part of the DUKE highway into a business trust, which is an asset class similar to a tax-efficient real estate investment trust (REIT) that no one has yet attempted in Malaysia since it was introduced by Securities Commission Malaysia about two years ago.

“We are exploring our options to monetise [some part of] the DUKE highway, but we are not in a rush to do so. There aren’t many ways we can do this and a business trust is one of the options,” managing director Lim Keng Cheng tells The Edge.

Lim is the younger brother of Iskandar-based property tycoon Tan Sri Lim Kang Hoo, who controls 32.4% of Ekovest. Lim owns 5.89% of the company.

Should Ekovest (fundamental: 1.5; valuation: 2.4) go ahead with an asset-monetisation plan, it is likely that only Phase 1 of the DUKE highway concession will be involved. The phase was completed in 2009 and is currently delivering strong cash flow to the group. The concession was valued at RM766 million when Ekovest bought over the remaining stake of 30% from Malaysian Resources Corp Bhd in 2014.

In Phase 2, which will cost RM1.18 billion, construction is 34%-completed. In January, Ekovest got the nod from the Public Private Partnership Unit in the Prime Minister’s Department to start work on Phase 3, which is said to cost RM3.57 billion.

Presently, the group has around RM1.18 billion of its cash tied up in “investment funds” that have been set aside for the construction of DUKE II. This amount was raised via an Islamic medium term notes that were used to finance the highway. The company will also have approximately RM300 million set aside upon the completion of the DUKE Phase II which will form part of the finance service reserve account for the Sukuk raised, says Lim.

Ekovest has a net gearing of 0.68 times, which is deemed high as it has over RM4 billion in new construction projects and is planning property developments worth over RM7.5 billion in gross development value (GDV). Hence, an asset-monetisation exercise is deemed necessary to beef up its balance sheet for further growth.

“The cash flow from DUKE [Phase 1] is very healthy, more than enough to service the debts, but we can’t touch the cash. It is ring-fenced to the highway and the debts,” explains Lim, adding that the initial traffic projections for Phase 1 have been met.

Lim rules out the possibility of using debt refinancing to monetise the highway — a practice not uncommon with concession assets — as it allows the owner to extract the net present value of the cash flow but leaves the assets heavily geared.

The more likely avenue would be to list Phase 1 as a business trust, with Ekovest selling part of its stake to other investors to raise funds. Under a business trust, more dividends can be paid out from the highway concession, based on the cash flow of the business instead of the accounting profit, which would be dragged down by heavy depreciation charges.

“All our businesses are sustainable and we are a very conservative company. We don’t want to be too aggressive, but if we can unlock more cash from our assets, then we can grow the business more quickly,” says Lim.

In the meantime, earnings have been slow to come through as Ekovest takes time to digests its existing projects, mostly related to works on Phase 2. On the property development side, as the group has just concluded some major launches, major work progress and billing will only start trickling in several months down the road. 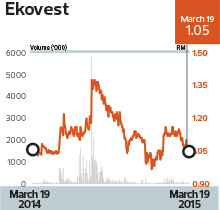 Over the past six months, Ekovest’s share price has fallen by about 24% to close at RM1.05 last Thursday, with a market capitalisation of RM907 million. This values the group at about 20 times earnings, based on its financial year ended June 30, 2014 (FY2014) net profit of RM47.08 million.

It doesn’t help that the group has been tight-fisted with dividends, preferring to redirect the cash back to its other operations.

That said, Ekovest has strong earnings visibility with a construction order book of RM2 billion, mostly for Phase 2 of DUKE, as well as the first phase of the River of Life project in Kuala Lumpur.

Meanwhile, the group’s property arm has racked up unbilled sales of over RM600 million from its property launches since late last year. “Our property sales from [mixed-use development] EkoCheras was over RM500 million but we have only recognised about RM35 million to date. The sales of the office and hotel suites over the weekend [March 14 and 15] will add RM150 million to RM200 million to our unbilled sales. In about six months, once we have completed the basement, we can start recognising the sales and our earnings will pick up,” explains Lim.

Interestingly, at a time when many property developers are trying to increase their recurring income base, Ekovest has opted to sell the office and hotel components of EkoCheras, allowing the group to roll over its capital into other projects quicker. “Better to spread the risk and let other people make some money. We have a lot of projects in the pipeline, so selling these will let us put money into other areas,” Lim says. He adds that the group will retain control of the retail mall component of EkoCheras to ensure it has control of the tenant mix and the mall’s concept.

Meanwhile, the group is looking for investors in the shopping mall components of its upcoming developments, KL River City (Titiwangsa) and The Gateway @ KL Bund in Gombak.

“We are looking for investors to come in, up to 49%. As long as we retain control, we are quite flexible. If people come in, it will accelerate our other projects. But our entry cost for the land is very low, so we can wait,” he explains, noting that investors from China have shown interest.

KL River City is a concept masterplan designed around the group’s EkoTitiwangsa development, in which the River of Life project will intersect with Phase 2 of DUKE. Lim says he is looking for partners to acquire the surrounding plots of land to develop KL River City.

At the same time, the group is putting the final touches on the plans for the third phase of DUKE, which will add RM3.57 billion to its construction order book, although construction will start next year.

Meanwhile, the remaining phase of the KL River of Life project is also going to add some RM850 million to the construction order book. The group is currently working on the first phase of the river restoration project, which is worth RM130 million.

Looking ahead, the group also has ambitious plans to build park-and-ride facilities with 20,000 to 25,000 parking bays to tap the country’s expanding public transport system.

“Anywhere a highway intersects with public transport, there should be a park-and-ride facility. Not just our highway, any highway. We have identified 52 sites but plan to roll out five of our own, with 4,000 to 5,000 parking bays each,” he explains.

To meet the company’s minimum internal rate of return target of 8% for any project, Lim says the park-and-ride facilities will have to be coupled with some commercial components.

Ekovest certainly has big ambitions but how quickly it will roll out these projects will depend on its ability to monetise some of its assets to raise its working capital. Lim notes that any cash call will only come next year at the soonest.