#edGY: The Hideout: not just another coworking space

With that in mind, he set-up The Hideout, but he says it’s not just another one of the many co-working spaces that have popped up in the Klang Valley in recent years.

The casual (and not-so-hidden) space for rent at 1 Tech Park, Bandar Utama, aims to do more for its tenants. Ng describes it as an “anti-co-working” workspace catered to a community of start-ups looking for a conducive and productive work environment.

The Hideout also seeks to congregate early stage companies under one roof, providing valuable incentives such as monthly meet ups with venture capitalists and an MSC-certified space.

Ng, 30, is also the brainchild behind The Canvas, a multi-purpose event space at Damansara Perdana to host corporate events, functions and parties. The Hideout is run by Erik Gan, Jeremy Ooi and Rowena Ong.

As a young entrepreneur himself, Ng knows what start-ups need — an affordable and conducive workspace. The Hideout opened its doors in July and is one of four co-working spaces with MSC certification in the Klang Valley.

At first glance, The Hideout resembles a typical co-working space. It is minimalist and made to look like a cosy café with bean bags, custom modular wooden tables and meeting rooms with plenty of natural sunlight. The walls are covered in exposed brick and idea paint. It’s the sort of space many might deem Instagram-worthy.

In fact, the space was previously occupied by social news website SAYS.com, which relocated its headquarters because it needed to expand. Ng, who was one of SAYS.com’s co-founders, insisted that the space should be reincarnated and put to better use after major renovations of almost RM200,000.

The Hideout’s rates start at RM450 per table per month, with a minimum commitment of two tables for three months. This also includes basic amenities such as Internet, game rooms, coffee and tea.

With The Hideout’s MSC certification — which some start-ups might require — Ng says that renting tables could be a cheaper and more viable option for those just getting things started.

“To rent an MSC-status space is very expensive and [some companies] just can’t afford it. So there’s this chasm of pain they have to overcome to get enough revenue to even afford the MSC space,” explains Ng.

Ultimately, what Ng seeks to achieve with The Hideout is to build a dynamic community of start-ups that are accountable to one another, with the aim of getting serious work done, of course.

To provide additional value to their services, Ng plans to hold monthly demonstrations for companies to build accountability among themselves. This entails teams showcasing their work and discussing their progress and plans in an open and transparent manner.

In that way, the different start-ups in The Hideout don’t just work individually but co-exist as part of a workable ecosystem with the bonus of various team-building activities as well.

Ng is best known for being the managing partner of 500 Startups, a Silicon Valley-headquartered venture capitalist firm. Leveraging on his involvement in the Southeast Asian start-up scene, Ng connects both investors and budding start-ups through The Hideout.

The Hideout aims to bring in venture capitalists from around the region at least once a month to provide feedback and expertise to these companies. This creates a win-win situation for both investors and start-ups.

“Being an investor, I can also stay close to these companies. If I went to Indonesia and asked a VC (venture capitalist), ‘Why don’t you make a trip to Malaysia? I have already seven companies,’ then he or she could meet them in one space. It’s a more compelling reason for VCs to actually come. In that way we solve the initial problems of there being not enough VCs in the ecosystem,” says Ng.

Currently, The Hideout houses seven companies of about 20 to 25 people in total. It plans to hit a minimum 30 people in order to achieve the social and monetary returns to be a going-concern.

For Ng, however, the motivation behind starting up The Hideout isn’t purely monetary. He says that profitability could be a far-fetched ambition for the business.

“This is not a profitable project, you know!  It’s a break-even project at best, and if there are more companies [in The Hideout], then there’ll be a bit of additional revenue,” Ng says.

He points out the low profit ceiling of the space management businesses and the exorbitant rent of The Hideout. But he is more optimistic on the value that the business can capture for what it could create for the start-up scene in Malaysia.

More than anything, Ng hopes to build a community of start-ups that are accountable to one another, connecting the dots between investors and entrepreneurs. To an extent, he is also open to the possibility of investing in those companies himself.

“I just don’t want this place to die lah. For me, it’s just such a disruptive way to kick-start the scene. There are a lot of idealistic motivations for this. And if there is a financial benefit in having a company to invest in, so be it.” 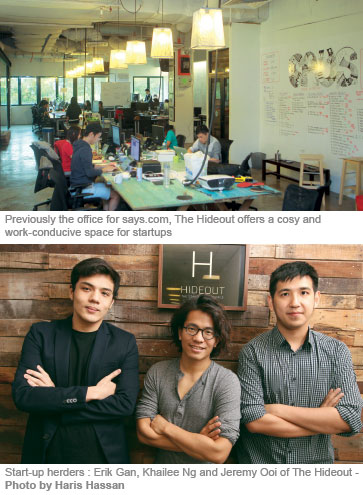