BERNICE LOW looked at her bank statement one day and saw a small pile of savings. Like most people, the writer thought of investing the money.

Then she departed from convention. She decided not to invest in property, stocks or a fixed deposit. Low put the money into the budget for her first feature-length film, In Between Floors, that hits local theatres in November.

“Instead of investing in some box in the sky (an apartment) by buying absurdly overpriced property, I decided to invest in myself and in proving my ideas to the market. So the film was funded entirely out of a portion of my nest egg,” Low tells #edGY.

Low, in her late thirties, trained as a lawyer but has spent most of her working life ghostwriting books, and penning articles and scripts. She also teaches Ba Zi (a form of Chinese astrology) on the side.

Low not only financed her film; she also wrote the script and directed it, ostensibly because her budget didn’t allow for a director.

“I consider myself a writer first and foremost, not a filmmaker,” she says.

For her first film, Low started by giving herself a small budget of RM40,000. In hindsight, she says it “obviously was insane and undoable but I was being kiasu by starting out with an über cheap number”.

She had to fork out an additional RM10,000, which went largely towards cinema distribution fees and post-production costs. A more realistic budget would have been RM70,000.

In Between Floors is a comedy about a uniquely Malaysian cultural schism. It revolves around two characters — an Ah Beng salesman played by Alvin Wong, and a sophisticated “Banana” played by Dawn Cheong.

They find themselves trapped in an elevator one unfortunate day. Their only lifeline to the outside world is a gonzo security guard.

The idea for the film stemmed from Low’s interest in exploring the Malaysian-Chinese cultural identity and understanding the communication gap between Chinese-educated Chinese (Ah Beng) and English-educated Chinese (the Banana).

“I hope that the audience at the very minimum gets a good laugh! That’s the plan because I certainly don’t have grand ambitions for people to take it (the film) terribly seriously,” Low says.

“It does have quite a serious question at its heart but I don’t think one should ever make a film to give an audience a takeaway [message]. This is ultimately positioned as a funny film that hits home, which is what comedy really is all about.”

Low says that her target audience is urban Malaysia. But her film — mostly in Chinese and Manglish — falls in an unusual spot given that most commercial films made in Malaysia are either in Malay or Chinese.

The cost of making a film

Her main struggle was filming on a micro-budget. She was adamant that everyone working on the production be paid their due. Well, everyone except her and her two producers.

“Only three parties, me and two producers, are not making money. The two producers agreed on a token fee for time and effort. The plan is to pay everyone what’s due or, at least, 50% of their rack rate,” Low adds.

Most cast and crew involved in micro-budget films work for free or on a “maybe we get paid” model.

Low states that for her film, everyone below the line-crew level were paid according to their rack rate.

“For some of our key crew, such as the director of photography, gaffer, leads — we worked out a deferment and back-end profit-share deal,” she reveals.

“We didn’t ask for favours. We pay for stuff but we ask for friendly prices. ”

To offset production costs further, Low brought on sponsors who supplied or loaned them items in exchange for some play in the film.

Low created a list of in-kind sponsors and figured out who could provide her with the big ticket items, mainly camera equipment and meals for the cast and crew.

Now that Low’s film is in the can and awaiting cinema time, the million dollar question is whether she will recoup her investment and hopefully make some money.

Many local filmmakers, especially independent ones, bemoan how hard this is. One thing for sure is that it isn’t easy to persuade local audiences to watch Malaysian films. Over the years, ticket sales growth for local films have been mostly stagnant at best.

To date, the 36 local movies released this year have managed to rake in only RM46.13 million, leaving a huge gap from last year’s numbers.

The exception is the Chinese New Year release, The Journey, that raked in RM17 million. The Journey is the country’s highest grossing film to date, topping 2011’s KL Gangster, which earned RM11.74 million in cinema sales.

Low isn’t expecting her film to do as well at the box office but she is intent on making it commercially viable.

“It’s hard to persuade people to spend RM10 to come and watch [this film], so we’re trying to get it into cinemas on a week where there is not much to watch, Hollywood-wise.

“There’s a very small window in Malaysia, when you can release an indie film and have some chance of finding an audience. It is usually in November,” she says.

“But, RM20,000 is a pragmatic number. I won’t say I’m happy with it. Obviously you’d want to go out and push it (sales). Two-thousand people doesn’t seem like a lot (of audience) but it is.”

To recoup as much money as possible, In Between Floors might screen on Astro First — the movie on-demand service of the satellite television provider. Then, Low hopes to get her film on international video on-demand via iTunes.

“For indie films, you want to be on as many platforms as you can because you want reach, right?” she asks pointedly.

With the multi-platform approach, the film is not banking on just ticket sales to make money.

Astro First is a movie-on-demand channel that is meant to widen the distribution of local content and enlarge its overall market. It allows viewers to subscribe to movies within two weeks of their theatrical release.

According to news reports, film producers can make an additional revenue of RM500,000 by releasing their movies to Astro First, a sum far greater than what DVD sales general bring in, and sometimes more than even the box-office takings.

“It doesn’t make sense to say no to Astro First, which is another way to achieve revenue [targets],” Low says.

Ultimately, Low wants an audience for her film and for her first venture to be a commercially viable one. It isn’t one or the other.

But what if, despite all her efforts, she fails to make her RM80,000 back?

“If I don’t make a lot of money from this movie, it’s okay because it functions as a CV thing,” she says.

“The rationale [for] this movie is that it is going to open different doors for me.” 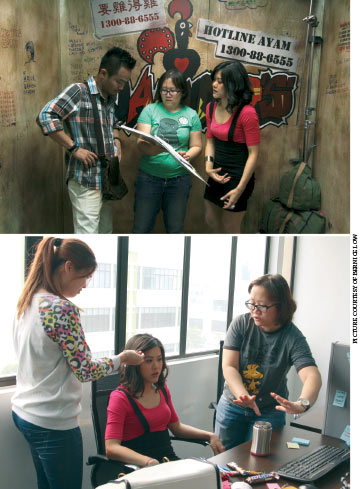 This article first appeared in #edGY, The Edge Malaysia Weekly, on October 27 - November 2, 2014.