Economists divided on possibility of another rate cut 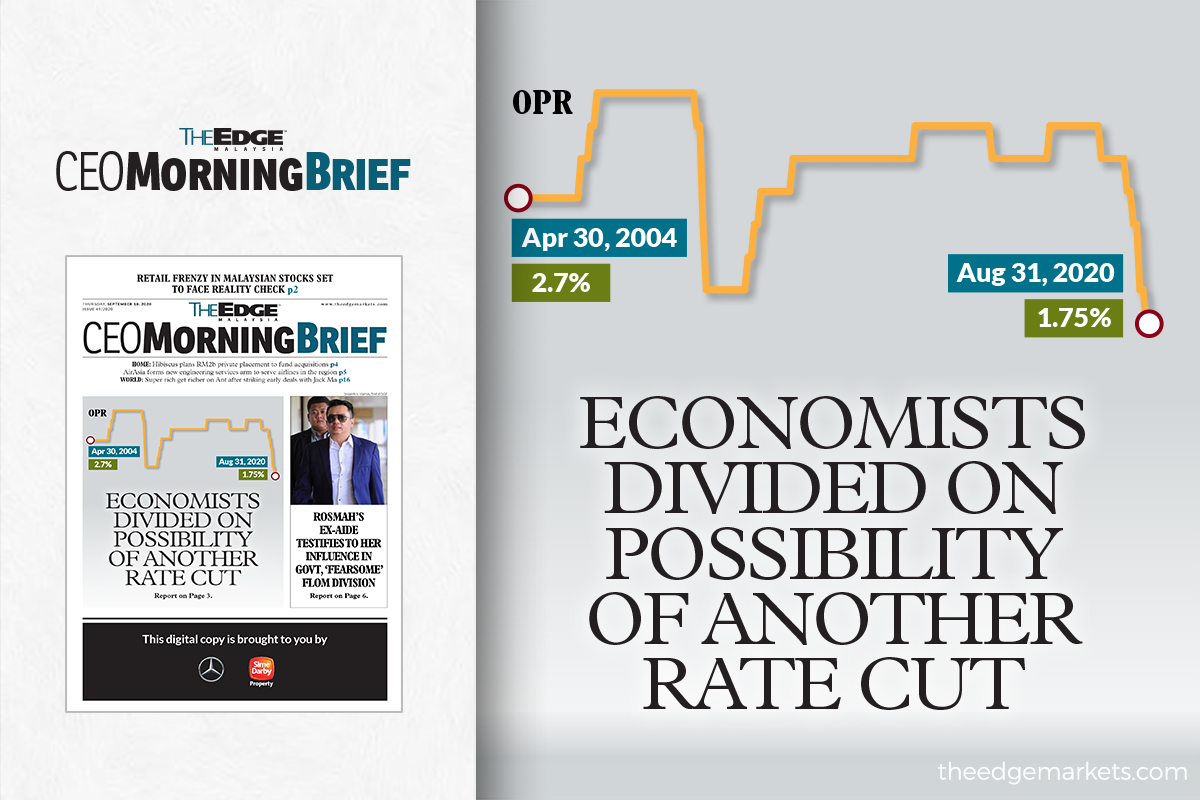 KUALA LUMPUR (Sept 10): Economists seem to be split on whether Bank Negara Malaysia (BNM) will again be cutting rates at its Monetary Policy Committee (MPC) meeting later today, with various surveys indicating a close call between those expecting another cut of 25 basis points (bps) and those that see the Central Bank taking a breather after four consecutive cuts this year. The case for a cut

ING Bank senior economist, Asia, Prakash Sakpal
There is still room to ease as BNM’s 1.75% policy rate, coupled with negative inflation, allows its easing cycle to run further. Negative inflation means the real policy interest rate is one of the highest in Asia, which is not a good backdrop for economic recovery. He also said another 25bps cut at the November meeting would not hurt.

DBS senior economist Irvin Seah
A final 25bps cut by BNM is possible to better align the risks in both inflation and growth. While BNM had cut the OPR by a total of 125bps year-to-date, with negative growth and the arduous recovery path ahead, there is room for further monetary easing to support growth in the coming months.

Hong Leong Investment Bank economist Felicia Ling
The research house maintained its expectation of another 25bps cut in the OPR, following the announcement of a downgraded 2020 Malaysian GDP forecast of a contraction of between 3.5% and 5.5% by BNM, as the Central Bank cited the possibility of downside risks from persistent weakness in global growth and the potential of COVID-19 further spreading.

Bank Islam chief economist Dr Mohd Afzanizam Abdul Rashid
The Central Bank certainly has the ability to reduce the OPR further, he said, given the low inflation, adding that the negative output gap — the difference between the actual and potential GDP — will likely persist in the near-term, suggesting that a further cut is justifiable.

CIMB-CGS economist Michelle Chia
The economist has revised her end-2020 OPR forecast from 1.75% to 1.5%, indicating her expectation of another 25bps cut, as she expects the Central Bank to deploy further monetary policy space to cushion against downside risks.

Public Investment Bank economist Dr Rosnani Rasul
Not just a further reduction of the OPR but the statutory reserve requirement (SRR) is possible, in the event of a prolonged pandemic. Similarly, she believes there is room for another cut, given the benign inflation.

The case against another cut

Standard Chartered chief economist, ASEAN and South Asia, Edward Lee
The Central Bank has room to adopt a wait-and-see stance, he said, as it takes stock and assesses the pace of Malaysia’s recovery in the second half of 2020. He added that global economies have reopened, with data indicating a clear pick-up in activity.

Any further cuts may have only a marginal impact and would reduce future policy space, given that some of the pandemic restrictions are still in place, said Lee. However, he does not discount further cuts in the event there is a recurrence of infections that would threaten the recovery of economic activities.

RHB group managing director Datuk Khairussaleh Ramli
While the bank expects GDP to contract in the third quarter, it will be at a much smaller rate. He said RHB is also expecting a slightly positive GDP growth in the fourth quarter.

The bank has also seen some “green shoots” in certain segments of its business in terms of loan applications, so Khairussaleh thinks there is “perhaps no reason to reduce the OPR for now”.

Kenanga Investment Bank head of economic research Wan Suhaimie Mohd Saidie
He said it is likely that the OPR would be maintained at 1.75% at today's meeting, based on the Central Bank’s upbeat tone on its outlook for growth recovery, noting that BNM had stated that economic recovery had already commenced in early May when the Movement Control Order (MCO) was relaxed. Having said that, he said the Central Bank still has room for further monetary easing should the pace of recovery weaken.