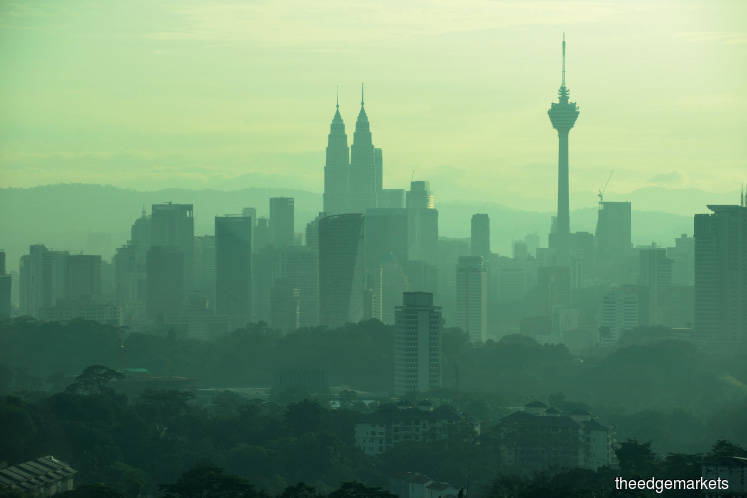 Here are two geeky — and corny — questions. One, how old is the computer? Answer: As old as Adam and Eve. It was an Apple with limited memory, just one byte. Adam bit on it — and everything crashed. Two, who invented cloud computing? Answer: It was Moses. He was the first with a tablet that could connect to the cloud.

If you think those are silly jokes, yes they are. But what is not laughable — other than the cloudy haze — is that global spend on public cloud services is set to cross US$214 billion by 2022, up from US$182 billion in 2018, according to Gartner Inc. That is a compound annual growth rate (CAGR) of 17.5% between now and then.

“Cloud services are definitely shaking up the industry. What we see now is only the beginning. We project the market size and growth of the cloud services industry at nearly three times that of overall IT services by 2022,” says Sid Nag, a research vice-president at Gartner.

Before we proceed, let’s pin down some definitions. Simply put, “cloud computing” refers to any application that can be used anywhere, anytime and on any device as long as the device is connected to the internet. There are three kinds: Infrastructure as a service (IaaS), which mimics hardware; Platform as a service (PaaS), which refers to the operating system or environment; and Software as a service (SaaS), which are applications on the cloud.

There are three types of cloud: Public cloud (examples include Gmail, Hotmail, Twitter, YouTube, Facebook), where resources are shared between users; private cloud (such as those used by banks, hospitals, insurance companies and government agencies), where the resources are only available to authorised users; and hybrid cloud, where some critical applications (such as finance and employee details) are on a private cloud and non-critical applications (such as marketing collateral and e-commerce merchandise) are on a public cloud.

The fastest-growing segment, as can be expected, is IaaS. That is because putting company workloads on a public cloud frees up (in many cases, eliminates) the need for servers, storage and networking gear to be kept and maintained in-house or in data centres. IaaS is set to grow 28% this year to reach US$39 billion globally, up from US$30.5 billion in 2018. The second-highest growth rate of 22% will come from PaaS.

More than a third of all organisations view cloud computing as a top three priority for investing. By the end of the year, more than 30% of new software investments will shift from cloud-first to cloud-only.

What about Asia-Pacific? This region (excluding Japan) will spend US$26 billion this year on cloud-related services, up a big 47% from 2018. By 2023, this spend is set to cross US$76 billion.

“Improving business agility and speed are the main focus areas. Security concerns and IT governance are major inhibitors. However, sentiments about security on public cloud have changed over recent years, with improving IT security now considered one of the top drivers for public cloud adoption,” says Ashutosh Bisht, a senior research manager for Asia-Pacific at International Data Corp (IDC).

China is obviously the biggest market and accounts for a whopping 50% of Asia’s overall spend. The country is on track to plonk US$12.9 billion (RM53.8 billion) on public cloud services this year. In second place, and far behind, are companies in Australia and India, which will invest US$4 billion and about US$3 billion respectively on cloud-related services.

The top three sectors? Professional services, banking, and discrete manufacturing. These will account for 33% of all public cloud services spend, mostly on IaaS as a replacement for buying data centre hardware. However, construction and professional services (for example, accounting, legal and software development) will see the fastest growth in public cloud spend between 2018 and 2023, says IDC.

Malaysia’s gross spend on information and communications technology (ICT) products and services is forecast to cross US$17 billion by 2020, from about US$15 billion in 2017, according to Gartner’s estimates. That is a CAGR of 4%. The fastest-growing segment would be software, at 9% a year to reach US$1.67 billion next year.

“Malaysia retained its 2016 ranking of 8th place. It performed exceptionally well in the cybersecurity parameter and made moderate progress in government regulatory environment. However, the country has declined or stagnated in most other parameters. It lost five spots in business sophistication, suggesting that it could be doing more to facilitate business operations. It also experienced lower scores in the aggregated cloud infrastructure and government segments, two fundamental drivers of cloud readiness,” says ACCA’s report.

“The CRI measures the extent to which economies are prepared to adopt and roll out cloud technologies. It ranks where economies are in relation to each other, rather than comparing absolute scores. It is a composite index made up of 10 parameters grouped into four readiness segments — cloud infrastructure, cloud security, cloud regulation and cloud governance,” says the report.

One key sector that could tilt the scales? Small and medium enterprises (SMEs), which are the backbone of Malaysia’s economy. There are about a million SMEs in the country, according to SME Corp Malaysia, the central coordinating agency under the Ministry of International Trade and Industry. Cloud adoption has huge potential to grow if SMEs jump on board to adopt cloud computing. That is one reason the market for cloud-related services may grow at 24% a year for the next five years.

“The pace of change in Malaysia is a bit slow because of the inherent preference for traditional and on-premise IT architecture and services sourcing models. The majority of enterprises are lagging behind the cloud maturity curve. They are still in the early stages of cloud adoption, with mostly ad hoc or opportunistic use of infrastructure and non-critical cloud services,” says Sherrel Roche, senior market analyst at IDC Asia-Pacific.

Meanwhile, in the BSA (Business Software Alliance) 2018 Global Cloud Computing Scorecard, Malaysia dropped one place to No 14 out of 24 leading IT economies. It was No 13 in 2016.

BSA reports that Malaysia has modern e-signature and e-commerce laws in place. These measures provide a good level of protection for cloud computing. It also has data protection regulations that are generally compatible with globally recognised frameworks.

Worldwide, it is the SMEs that are jumping on the public cloud bandwagon because unlike large enterprises, which have or need data centres, they cannot afford to invest in servers, storage and networking gear. Those fixed assets are a huge capital expenditure. On the cloud, SMEs can operate on an operating expenditure model, paying for computing and services as and when required, also known as elasticity.

Also, backup and recovery can be automated, software updates can be done automatically, employees can access the cloud anywhere at any time from any device connected to the internet and teams in remote locations can collaborate seamlessly. In other words, cloud levels the playing field for SMEs.

Across the Causeway, the Infocomm and Media Development Authority of Singapore announced in June its GoCloud initiative to help ICT SMEs in the city state to transform their software offerings into being cloud-ready. Three approved companies — Amazon Web Services, IBM Singapore and NTUC LearningHub — will provide these SMEs with technical consultancy services to build up their digital capabilities in cloud native apps.

What can governments do to shrink the digital divide? ACCA recommends that governments work to develop initiatives that boost connectivity fundamentals. These could be government cloud (G-Cloud) schemes that improve international and domestic connectivity as well as natural digitisation plans that drive short-term technological innovation in emerging fields such as 5G, the Internet of Things, artificial intelligence, and address longer-term development goals.

Some countries are already doing that. The CRI 2018 index includes six non-Asian economies (Brazil, Germany, South Africa, the UAE, the UK and the US) to provide an additional layer of international comparison. “The results show that the top Asia-Pacific performers (Singapore and Hong Kong) come out as global leaders, ahead of much larger economies such as Germany, the UK and the US,” says ACCA.

The bottom line: Is the future cloudy? Yes, for two reasons. One, because cloud computing offers a standardised platform for hosting applications that can be accessed individually and globally. Two, because it is no longer “why” you should consider moving to the cloud, but “how” and “when” should you do it. The future should be cloudy, but not hazy.