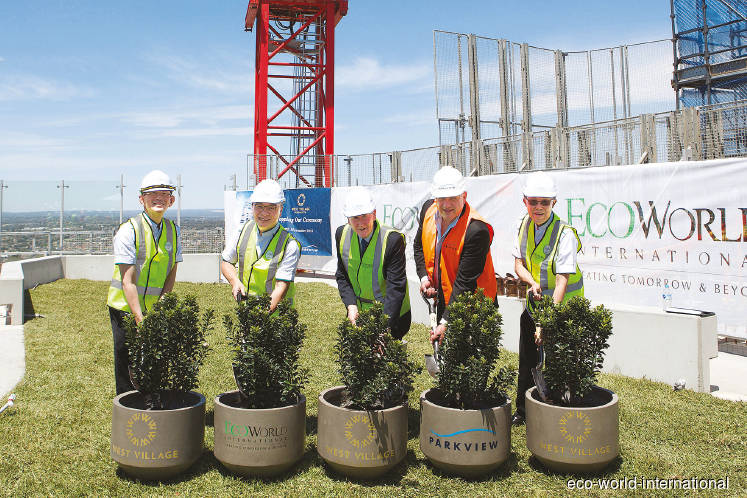 Eco World International Bhd (EWI) has sold 95% of its first Australian development, West Village in Parramatta, since its launch in 2015.

“We have always held the view that Parramatta would be the next growth area for the Greater Western Sydney Region as it is only 24km from the Sydney Central Business District (CBD). It is the administrative seat of the City of Parramatta and has excellent infrastructure and amenities,” EWI Australia CEO Yap Foo Leong said at the topping out ceremony on Nov 12.

Taking up about one acre at the corner of Church Street and Parkes Street, West Village has a gross development value of A$315 million (RM892 million) and will comprise a 40-storey tower with 398 apartments. On the ground level, there will be 1,300 sq m of retail space for food and beverage outlets.

Buyers of units in the project — designed by internationally recognised architecture firm Woods Bagot and celebrity landscape designer Myles Baldwin — are a mix of international and local investors.

“Parramatta truly suits our hallmark for rolling out quality developments in prime locations and West Village, being situated at the entry to Parramatta CBD, is envisaged to transform Parramatta,” said Yap.

Facilities will include a rooftop terrace that will feature a chef’s kitchen and lounge, a virtual golf room, a piano room and a landscaped garden.

The group also has a project in Melbourne, named Yarra One, that is under construction and will be topping out in the first quarter of next year. The A$243 million development will comprise 255 apartments in a 26-storey tower.