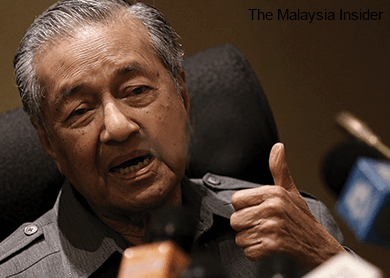 (Oct 9): The Attorney-General's Chambers (AGC) is not being transparent in clearing state investor 1Malaysia Development Berhad (1MDB) of making false disclosures, Tun Dr Mahathir Mohamad said today, and asked if the prime minister was behind the decision.

Writing in his blog this evening, the former prime minister also said the attorney-general (A-G) now appeared to be acting "higher" than a judge by deeming Bank Negara's probe into 1MDB as having no grounds for charges to be framed.

"It would seem that the A-G has made the judgement, rejecting the case as having no merit for a hearing in a court of law. And when an appeal is made, the appeal is dismissed by him on grounds which are not clear. There is a lack of transparency here," Dr Mahathir wrote.

He was commenting on the AGC's announcement yesterday that 1MDB had committed no offence with regard to making inaccurate or incomplete disclosures, and the central bank's rebuttal this afternoon that its investigations had found that 1MDB obtained permissions to invest abroad based on inaccurate disclosures.

Bank Negara also said that it had revoked three of these permissions granted to 1MDB for foreign investments worth US$1.83 billion (RM7.53 billion), and ordered the state-owned firm to repatriate the funds back to Malaysia.

"In this particular case the people would like to know whether the prime minister is involved or not. By dismissing this case, suspicions will remain in the minds of the people. In fact people are thinking that the decision of the A-G may not be by the A-G," Dr Mahathir said.

"Is this the rule of law that this country is supposed to uphold? Is the A-G higher than a judge, that his judgement is final and there can be no appeal?"

Dr Mahathir, who has repeatedly criticised Najib over 1MDB since last year, said that instead of the rule of law, Putrajaya was now cracking down on those who questioned it over the Finance Ministry-owned firm.

He decried the use of the Security Offences (Special Measures) Act 2012, an anti-terrorism law that allows prevention, on the use of former Umno man Datuk Seri Khairuddin Abu Hassan and his lawyer Matthias Chang.

Khairuddin had lodged several reports overseas with foreign investigators against 1MDB, an act, which the Inspector-General of Police had described as akin to sabotage of the country.

"The arrests of Khairuddin and his lawyer Matthias Chang have created fear among the people that reporting about wrongdoings of the Government and its officers constitute threats to security," Dr Mahathir said.

These responses by Putrajaya meant that the call by the Malay rulers for 1MDB to be investigated and resolved quickly and transparently can no longer be achieved, the retired statesman added.

"There are literally dozens of people with knowledge of the wrongdoings in 1MDB who will not risk giving evidence or making accusations because they risk being detained and charged under the Security Offences Act.

"All these only made the lack of confidence towards Putrajaya worse, and turned Malaysia into a 'pariah state' in the eyes of the world.

"A state where anyone can be hauled up and questioned by the police, detained and charged through abusing the laws of the country," Dr Mahathir wrote. – The Malaysian Insider