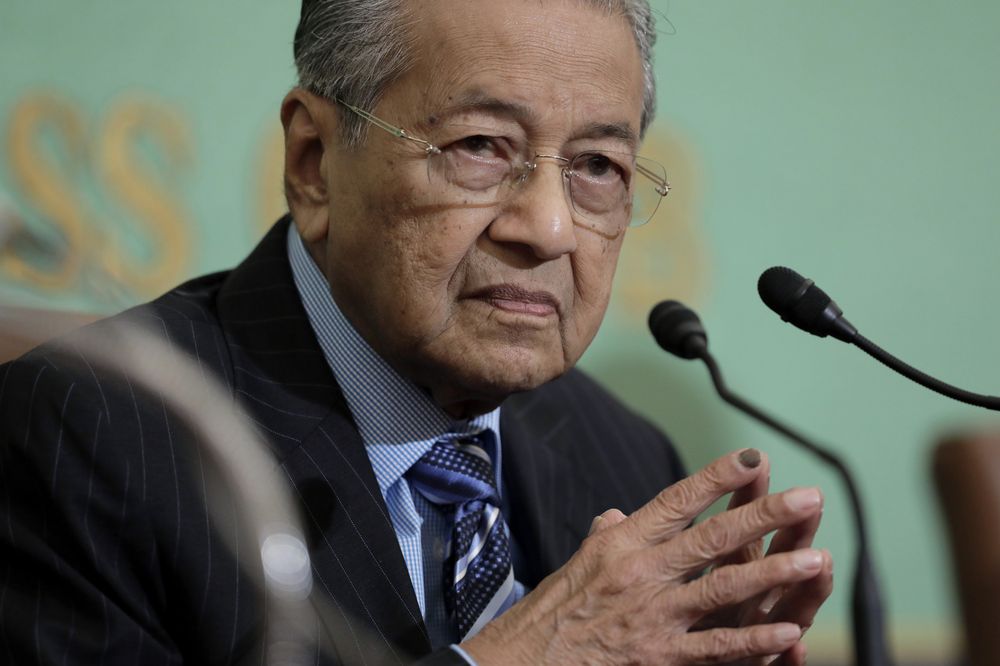 PUTRAJAYA: Prime Minister Tun Dr Mahathir Mohamad has urged the public to be patient with the Government’s decision over the fate of the RM81 billion East Coast Rail Link (ECRL) project, and to wait for the official statement from Finance Minister Lim Guan Eng.

“Has Guan Eng given a statement [on ECRL]? If he hasn’t, let’s just wait for him,” Dr Mahathir told reporters today after attending an executive programme for the highest statutory bodies’ management.

“We will wait. We have to be patient. Sometimes, people make mistakes. We have to understand that this is a new Government. The number of mistakes we [have made] is not [a lot] but people notice them very much because this is the new Government,” Dr Mahathir added.

When pressed further about whether the Government has made a decision on the project, he reiterated again to “wait [for] what Guan Eng says”.

Meanwhile, Dr Mahathir said the photograph of a letter from the Ministry of Finance to cancel the ECRL project could be a fake. “Government’s letterhead, anybody can cut and paste it, that is not the official...,” he said when asked about the photograph that has been circulating on social media.

The photograph was of a letter dated Jan 18 this year and signed by Guan Eng. It was addressed to Malaysia Rail Link Sdn Bhd chief executive officer Datuk Seri Darwis Abdul Razak.

According to the letter, the Government had decided to cancel the ECRL with immediate effect and Guan Eng purportedly instructed Darwis to convey the Government's decision to the project's main contractor, China Communications Construction Company Ltd and its subsidiary, China Communications Construction Company (M) Sdn Bhd, as well as the project’s financier Exim Bank China and other financial institutions involved.

On Pakatan Harapan’s recent defeat in the Cameron Highlands by-election, Dr Mahathir said the result was not surprising.

“We have a proper election, [there is] no hanky-panky. One has to remember, during the 14th general election, UMNO did score a pretty high win, but [it was] not enough for them to become [the] government.

“So, this winning by them is not surprising, especially this (Cameron Highlands) is a rural area, and they are always strong in rural areas. They play racial issues, it is too bad, but that is the decision of the people, we accept [that],” he said.

Dr Mahathir also said the Government needs to address the issues that Malaysians are dissatisfied about, especially the high cost of living.

“For rich people, the high cost of living doesn’t mean anything, but for poor people, it is a big problem. And these are poor people living in rural areas, so we must find ways to reduce the cost of living and to help them earn better income,” he said.

Separately, Dr Mahathir said the Government will stand firm on its decision to ban Israeli athletes from taking part in the World Para Swimming Championships in July.

“We stand [by] our principle. Our principle is that Israel is a criminal nation. It has been breaking international laws without anybody saying anything. So, we have our right to voice our feelings and have our own policies,” he said.

“Besides that, America doesn’t allow people from five Muslim countries (Libya, Iran, Somalia, Syria and Yemen) to go into America, why is it that people don’t complain? And many countries in Europe don’t allow foreigners to come, this is normal.

“But we, have a reason. These people (athletes) are not seeking for asylum, fear or sickness. They are not in trouble. They come from a country that doesn’t obey international laws. And we have to stand [by] our principle,” he added.

It was reported on Sunday (Jan 27) that the International Paralympic Committee (IPC) had stripped Malaysia of the right to host the 2019 world para swimming championships following its ban on the participation of Israeli athletes.

To this, Dr Mahathir said: “If they want to cancel, cancel lah. I noticed that the world feels compelled to obey Israel, which I don’t understand because the rest of the world has their rights. We don’t obey Israel.”