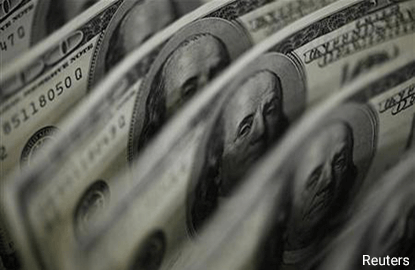 TOKYO (March 21): The dollar was on the defensive in Asian trading on Tuesday, after Chicago Federal Reserve President Charles Evans reinforced the perception that the U.S. central bank won't accelerate the pace of its interest rate hikes.

The dollar index, which tracks the greenback against a basket of six major rivals, edged down 0.1 percent to 100.35 after falling as low as 100.02 overnight, its lowest since Feb. 7.

Evans, a voter on the Fed's policy-setting committee this year, repeated the central bank's call for two more interest rate increases this year, disappointing dollar bulls who had hoped for more a faster pace of hikes.

Evans did say, however, that an additional hike was possible if inflation were to pick up.

The Fed lifted interest rates last week and said that its future course of hikes would be "gradual". That pushed down U.S. Treasury yields, to the dollar's detriment.

The yield on benchmark 10-year notes stood at 2.464 percent in Asian trading, down from its U.S. close on Monday of 2.472 percent.

The dollar slipped 0.1 percent to 112.48 yen after dipping as low as 112.44, its deepest trough since Feb. 28, as market participants in Tokyo returned from a public holiday on Monday.

"There will be a lot of stop-loss selling if the dollar breaks under 112 yen," he added.

France's upcoming two-round election on April 23 and May 7 remained in focus, with nearly 40 percent of voters saying they are undecided about which of five main contenders to back.

The leading candidates clashed in a televised debate on Monday, with centrist Emmanuel Macron accusing far-right leader Marine Le Pen of lying and seeking to divide the French.

Sterling edged up 0.1 percent to $1.2370, but remained well shy of its Monday high of $1.2436, its loftiest peak since Feb. 28, after Prime Minister Theresa May said she will trigger Britain's separation proceedings with the European Union on March 29, launching two years of Brexit negotiations.

"Despite the doom and gloom hanging over sterling, it has held up well this year – if so traders are to be surprised with some sort of plan or minor victory from the UK government, we could in fact see GBP trading higher in a relief rally," wrote Matt Simpson, senior market analyst at ThinkMarkets in Melbourne.

"Still, with two years on the clock there is still a lot that can go wrong, so hold on to your hats as we could be in for a rocky ride," he added. - Reuters