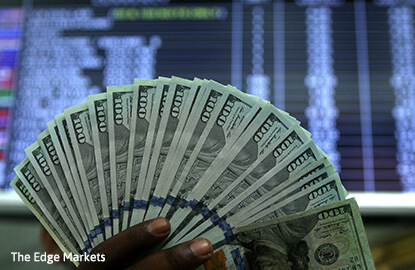 LONDON (Jan 18): The dollar rebounded on Wednesday after falling for five days in a row against its currency basket, as investors eyed a speech by the head of the Federal Reserve later in the day and U.S. inflation data for clues on the path of interest rates.

After a volatile Tuesday on which sterling rose more than 3% for its best showing against the dollar since at least 1998, currency markets were calmer on Wednesday, with most of the previous day's moves seeing slight reversals.

"Everything is just a partial reversal of the price action yesterday," said RBC Capital Markets currency strategist Adam Cole. He said the dollar's recent weakness had been primarily driven by positioning, which had built up heavily in favour of further dollar gains and was therefore vulnerable to exaggerated falls on negative news.

One of the reasons given for the greenback's weakness was a comment from U.S. President-elect Donald Trump in a weekend newspaper interview, in which he said U.S. companies could not compete with China, because the dollar was too strong against the yuan, which was "killing" them.

Cole said the comments might have helped to weaken the dollar at the margins, but they had not been a major factor as Trump had shown a lack of understanding of currency markets.

"The fact that he talks about China manipulating the currency is just not credible... so that reduces the credibility of what he says about the currency, because it's clearly at odds with anything that's actually happening," Cole said.

But Junya Tanase, chief forex strategist at JP Morgan in Tokyo, said that if U.S. officials further talked down the dollar, "(it) could weaken and the correlation to the interest rate differentials may end."

The dollar surged at the end of 2016 on expectations that fiscal stimulus proposed by Trump would boost growth and inflation, and lead to a faster pace of U.S. interest rate rises.

Fed Chair Janet Yellen's speech later on Wednesday, to the Commonwealth Club in San Francisco, could offer clues about the direction of policy.

San Francisco Federal Reserve Bank President John Williams said on Tuesday he saw a "good case" for three rate hikes this year even without fiscal stimulus, but if the economy accelerated, the Fed would need to raise rates faster.