DiGi.Com Bhd
(Aug 18, RM5)
Maintain outperform with a lower target price (TP) of RM6.10: DiGi.Com Bhd (DiGi) maintains its conviction that the current irrational price offers (for several mobile plans) are likely to be short-lived, but may still take a few months for industry players to achieve equilibrium price levels.

The current weak ringgit may not result in any severe impact to DiGi’s international direct dialling (IDD) segment as the group tends to renegotiate rates during times of high currency volatility, judging from its historical track record. There is no change to our earnings forecasts post our recent company visit.

We maintain our “outperform” call on DiGi but with a lower TP (from RM6.63 previously), given that the market appears to be undergoing a de-rating process as a result of the challenging macro and currency outlook. Our renewed TP is based on a lower targeted financial year 2016 (FY16) enterprise value/forward earnings before interest, taxes, depreciation and amortisation of 14.1 times (from 15.3 times previously), representing a +1 standard deviation (as opposed to +1.5 previously) above the four-year mean.

The intense price competition among telco operators is expected to be temporary as DiGi and another key player do not intend to respond any further to the recent price war initiated by Celcom Axiata Bhd and U Mobile Sdn Bhd, which launched several value-destructive plans.

Although these headline packages’ prices managed to draw some subscribers’ eyeballs, it could compromise their network qualities as well as users’ experience.

The management believes the big boys are still very much focused on earnings and subscriptions, while the smaller players tend to emphasise market share, thus suggesting that the current value-destructive plans are not sustainable.

This is not a surprise, given that the consumers, especially the prepaid subscribers (which generally are more price sensitive than the post-paid users), have seen their disposable income eroded post GST, thus leading to more cautious spending. The management believes the market may take months to neutralise the GST impact. The weak currency may not have a severe impact on DiGi’s IDD segment. Generally speaking, the weaker ringgit is expected to dampen telcos’ IDD segment margins as the segment’s revenue is denominated in ringgit, while the traffic cost is US dollar-based.

Nevertheless, despite the US dollar strengthening by 14% against the ringgit during the fourth quarter of 2014 (4Q14) to 2Q15 period, the group’s traffic charges (which comprise IDD, mobile termination fees and fibre lease) have managed to stay at a range of between RM320 million and RM330 million (or 20.2% to 20.4% of its service revenue).

Apart from the cost efficiency, we understand that DiGi managed to renegotiate a better IDD traffic rate during the said period. As a result, should DiGi be able to maintain its efficiency, we are not surprised that the IDD traffic charges may be under control again in 3Q15, despite higher currency volatility.

While DiGi is reluctant to share more details on its IDD segment, we understand that the authorities have revealed that Malaysia’s migrant workforce stood at 6.7 million (of whom 2.1 million possessed valid work permits and were registered with the Immigration Department) in March. Thus, assuming 50% of the migrants opt for DiGi’s prepaid network, we estimate that the IDD segment could contribute  about 33% to 49% of the group’s prepaid revenue for 1H15.

Foreign shareholding continues to narrow, in tandem with the sector peers as well as the overall broader market. DiGi’s foreign shareholding has narrowed to 13.6% in July, from 14.9% in end-2Q15 and its all-time high level of 15.9% recorded in February. 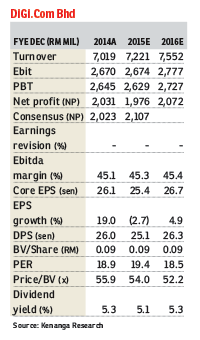