The project, to cost an estimated RM6.3 billion, will be developed on 157 acres (63.5ha) of reclaimed land off Pengerang (completed by Dialog) and will comprise a 2.1 million cubic metres storage capacity and a deep water jetty with 12 berths. Of the RM6.3 billion project cost, Dialog secured RM5.5 billion worth of engineering, procurement, construction and commissioning work (EPCC) for this job. This unveils Dialog’s Phase 3 tank terminal development at Pengerang.

We estimate this plant to generate RM40 million to RM50 million in associate profit per annum for Dialog (based on its 25% stake) when it is operational. Phase 2 is its regas terminal operation.

Phase 3 is pending completion of several terms. The SHA is conditional upon fulfilment of several terms (that is, EPCC contracts, alliance agreement, letters of intent with potential specified customers on terminal use, and due diligence studies). We estimate the project to be ready by the fourth quarter of 2017, similar to the regas project.

With Phases 1, 2 and 3 projects in progress, the upcoming Pengerang tank terminal facilities will kick into higher gear. Based on the combined storage design of Phases 1 and 3, we see accelerated expansion in capacity. — Maybank IB Research, Dec 22 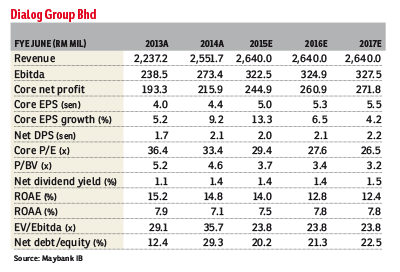